Bad For You - Arby's Venison Sandwich

By Bryan Bierman
PhillyVoice Contributor
Bad For You Arby's 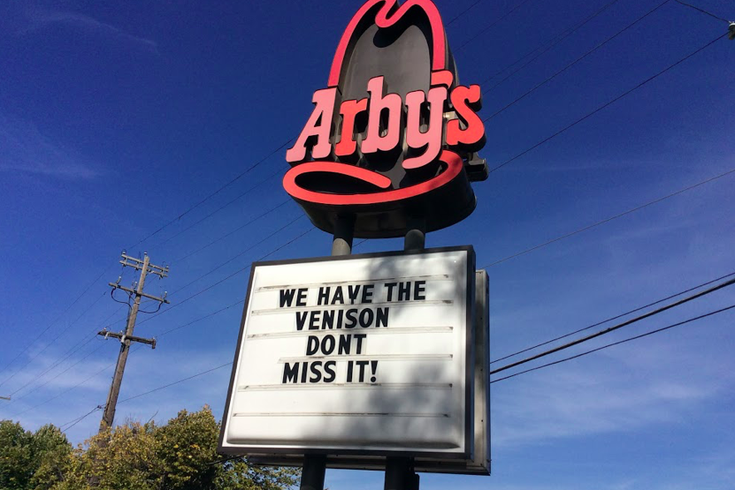 I made my way to Arby’s in Port Richmond on Saturday to get my hands on one of their Venison Sandwiches available at most of their locations for ONE DAY ONLY. It was a nationwide follow-up to an earlier venison test run the company did in five hunting states last year, which ended up selling out in hours.

This time was no different. By the time I got there, around noon, two hours after their opening, there were only 22 venison sandwiches left out of the original 50. I would imagine they were all sold out before the following two hours. Pretty impressive for a sandwich that costs $9. In Wyoming, Colorado and Montana, Arby’s also offered an elk sandwich option.

How many exotic animals have you eaten? Most of us have probably had cow or chicken, but what about kangaroo or Reptilian? This is actually the first time I’ve ever had deer meat, and it’s not all that rare, although it definitely is for fast food. It’s pretty brilliant for Arby’s to corner the market like this of more exotic choices, as their “We Have The Meats” rebrand has made meat its entire marketing focus.

So where does an Arby’s in Port Richmond get 50 slabs of deer meat? New Zealand, obviously. For the past year, Arby’s has been stocking up on free-range grass-fed deer from a supplier in New Zealand strictly for this promotion. One would have to figure, Arby’s is already figuring out where to get its next batch, given how well this one sold.

How do they cook it? Well, the venison steaks are cooked and soaked in garlic and other flavors then vacuum-sealed in a plastic bag. After being shipped to the stores, the bags are placed in hot water and reheated.

If you think it sounds unappetizing, you should have tasted it.

As a venison virgin, I know enough to not base the entire world of deer meat on a bagged and warmed-up Arby’s sandwich because it has to be better than this. I don’t think it was cooked—or reheated in a plastic bag—all the way. This had the consistency of a dog toy but without the squeak or a peppery rubber deer tire.

Since I couldn’t bite through it without sawing it in half with my teeth like a badger, the bun was quickly mangled and I had to hold the meat with my bare hands, resulting in a disgusting venison thumbprint. (Not to be confused with Venison Thumbprint, the terrible mid-to-mid ‘70s prog rock band.) 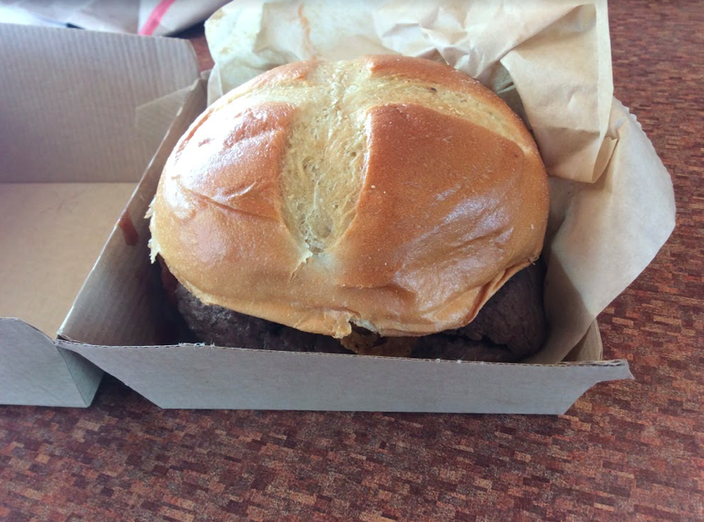 Topped with some uncrispy, crispy onions and an interestingly sweet Cabernet steak sauce made with juniper berries, it was a good supporting cast. If only the venison stepped up its game a little. The worst part about it was that it didn’t even necessarily taste bad, mostly that it had little taste whatsoever. The most vibrant part of the meat was the copious amount of pepper they added, which is almost never a good sign.

Instead of a juicy deer steak like the pictures, this was gray and floppy. It ended up looking like the liver and onions from that one episode of Doug where he’s scared to eat them. Only in that episode, he eventually learns to like liver and onions.

I don’t care if it is dinner at Patti Mayonnaise’s house. If she was having Arby’s Venison Sandwiches, I’m not going.

Verdict: Arby’s tried something different with its Venison Sandwich, so that is a plus. Unfortunately, this was quite underwhelming. If you missed your chance, its success should indicate it will make a return, likely next year.