Bad For You - Sweet Heat Skittles and Starburst 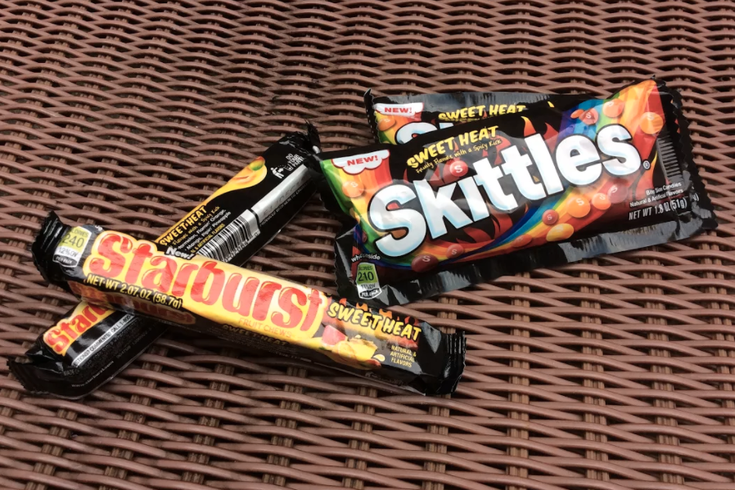 If you like spicy and sweet together, this is that.

What do candy companies do when seemingly everything has been done?

Just the sheer amount of competition in 2017 is enough to make two candy juggernauts—Starburst and Skittles—scramble for new flavors and, hopefully, new sales.

The weird part about this is, as everyone knows, Wild Berry are the best kind, so there’s not even a point in making new Skittles. (I will go to the grave on this.)

Starburst is in the same boat. There’s everything from Superfruit to Minis to FaveREDS, which are the pink and red flavors together at last.

Still, there’s only so many combinations of fake flavorings before you are backed into a corner and need to create something new. Wrigley’s, the parent company of both Starburst and Skittles, have decided to take a big swing in a different direction using two of its most famous creations.

The result is new Sweet Heat Skittles and Starburst, a spicy variant on the two staples. They are not the first candy company to try this as Warheads sour candy recently debuted its spicy Hotheads line. There’s also a long history of spicy Mexican-inspired candies and treats using tamarind, chili powder or cinnamon. It seems that Wrigley’s is just trying to get ahead of the industry if spicier treats are to be the next snack fad.

This actually isn’t the first time Skittles has experimented with spicier flavors as their long-discounted Australian-only flavor Skittles Sensations featured Chili Berry and Lemon Tingle. I am not a big fan of spicy foods and have the sensitive tongue of a baby calf. Still, I can appreciate something for what it is because I am a profess… Nevermind, I just tried them.

These are the worst.

I hate this. I hate this so much. I hate having to try two of the flavors and both being terrible and having to have an open mind for the other flavors when the same anger-inducing result occurs. It’s not even blended well if you did like spicy and sweet together, so you don’t really get the mixed sensation necessarily. It’s basically a regular candy until you swallow it, then comes the awful spiciness. First it’s sweet. Then it sucks. 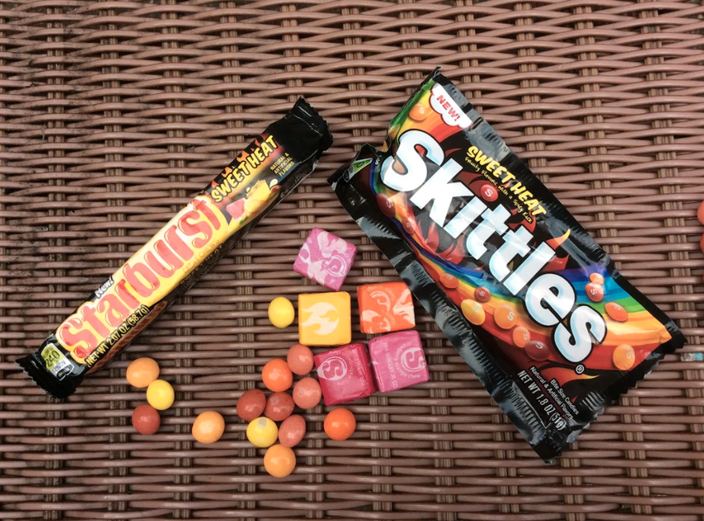 Having similar and even identical flavors, the Sweet Heat Skittles and Sweet Heat Starburst are pretty evenly bad. I would say that the Starburst version probably has more of the spice per candy, except if you eat more than one Skittle at a time (like an American).

I almost hate this as much as the BeanBoozled Jelly Beans because, while they definitely tasted worse, they were supposed to. The Barf jelly bean wasn’t delicious at first, it was straight up barf. The Sweet Heat candy gives you a false sense of happiness on first bite, and then tricks you with its throat-stinging magic act. Not only do these cost a dollar, they also ruin your day.

This is something they would sell as a gag gift back in the day in the back of a comic book, but now it’s a real food. If you give this candy to someone and they eat it, they’ll say, “That must be expired or something,” but you get to tell them, “No, it’s supposed to be terrible like that.”

Try giving these out on Halloween and see how fast your house gets egged.

Verdict: I hate this so much but it’s also not made for me. If you like spicy and sweet together, this is that. Probably still disgusting though. Get this away.