'I don’t know about you, but I sure love multi-textural eating experiences'

By Bryan Bierman
PhillyVoice Contributor
Bad For You Entertainment 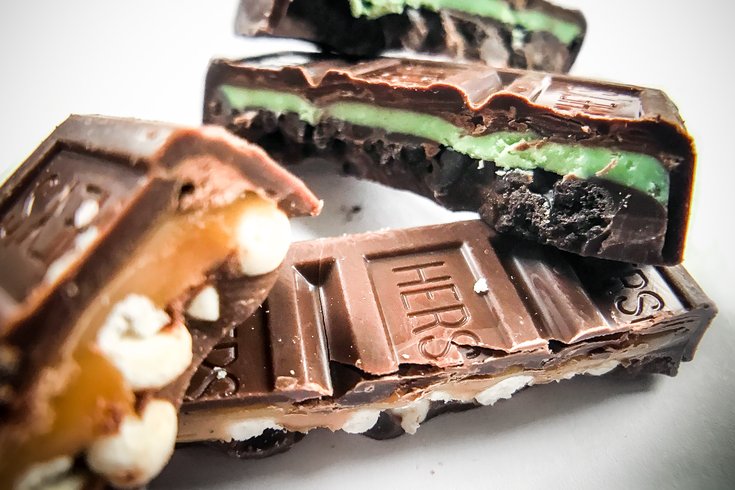 For over 20 years now, I have watched at least a couple episodes of Seinfeld every week, so much that I can almost recite entire shows. While I will often say this about multiple episodes, my actual favorite is “The Dealership” from the ninth and final season. It’s the best balance of the show’s post-Larry David era wackiness and truly the last great episode of the series.

In it, Jerry brings George along to a car dealership as he attempts to get an insider’s deal from David Puddy, Elaine’s on-again, off-again salesman boyfriend. Stuck at the dealership, George is starving, and after finally scrounging up enough change to buy the second-to-last Twix bar from a vending machine, it gets stuck. He returns to find the Twix is gone and there are no more left, before seeing one of the dealership’s mechanics eating what he believes are both Twix bars.

George confronts the man, who claims he was eating a 5th Avenue. George points out that he still has cookie crumbs on his lip, which means that it had to have been a Twix, as “Twix is the only candy bar with the cookie crunch.”

A recent rewatch sparked the Investigative Candy Journalist in me to take a closer look at the episode’s claims. Though George was echoing an old early-’80s Twix slogan (“The chocolate candy with a cookie crunch!”), he states that it’s the “only candy bar with the cookie crunch” and then later in the episode that it’s “the only candy with the cookie crunch.” Perhaps this was true when Twix was first released, but by January of 1998 when the episode aired, this was not true at all. Hershey’s had already released their Cookies ‘n’ Cream bar a few years prior, which has bite-sized cookies in it. Before that, the company even had a Cookies ‘n’ Mint bar, which coincidentally has been recently re-released as a Wal-Mart exclusive.

If you wanted to push the issue, you could say that George is still technically correct, depending on one’s definition of “cookie crunch.” This 1996 Hershey’s Cookies ‘n’ Cream commercial uses the slogan, “A mouthful of cookies in every bite.” While they don’t use the term “crunch,” there is a definite crunch while eating a Cookies ‘n’ Cream bar, so this should be close enough to prove that Seinfeld was wrong. 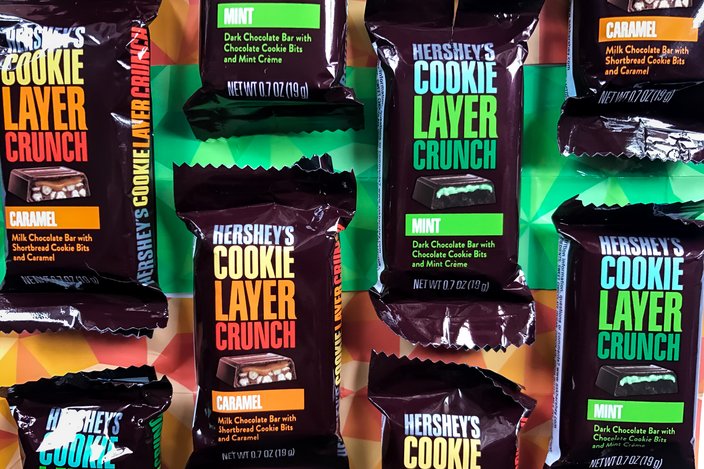 Nevertheless, the release of Hershey’s new shortbread-filled Cookie Layer Crunch bars has made me realize how far we’ve come in putting cookies in candy. In fact, the release of the new Milka Oreo candy bars that recently caused a stir on the internet was planned by its parent company Mondelez International to aggressively take some of those dwindling candy bar sale dollars from Hershey’s.

At first glance, the packaging is very modern for a candy bar, with big bold type that’s larger than the picture of the actual candy. It definitely looks different from other bars in the candy aisle, which was probably the intended result. I purchased the nine-piece bag of the caramel and mint flavors. There is another vanilla crème option that was not reviewed.

Past the wrapper, the Cookie Layer Crunch comes in a three-piece chunk that’s about double the size of one of the Hershey’s Nuggets. The pieces are pre-cut so they are snappable for sharing (if you are into that sort of thing), but be warned, as a few of the little shortbread cookie balls will fall all over once you snap them.

RELATED LINKS: Billy Joel will perform at Citizens Bank Park again | Tooth-fairy customs from across the globe | Extra 'bling' this Saturday with Lil Jon for HOD 2017

The caramel version seems to be the one pushed the most in the marketing of the bars and the obvious comparison is the Twix, as they have the same ingredients, only everything’s in different shapes. Instead of one long cookie, the Cookie Layer Crunch uses the aforementioned shortbread balls, which taste almost exactly like the kind of cookie balls that are in Twix Ice Cream bars.

There are differences, though. The caramel variation of the Cookie Layer Crunch has way more caramel than that of a Twix bar. It also has the instantly recognizable perfected sweetness of Hershey’s milk chocolate. When combined with the cookie bites, however, the whole package comes off a little too sweet, noticeably sweeter than a Twix bar.

The mint version of the Cookie Layer Crunch is much different, replacing the shortbread with chocolate cookies, the milk chocolate with dark chocolate, and the caramel with a mint crème. In essence, it’s a candy bar version of a Thin Mint Girl Scout cookie or Keebler’s Grasshopper.

It was also the best one that I tried. The mintiness wasn’t too overpowering like the recent peppermint popcorn I reviewed, nor was the dark chocolate too bitter for the whole package.

Verdict: While the mint version was better than the less-than-Twix caramel variation, the Cookie Layer Crunch is a solid, more rich snack for an every-once-in-a-while snack that likely won’t replace your favorite candy bar.