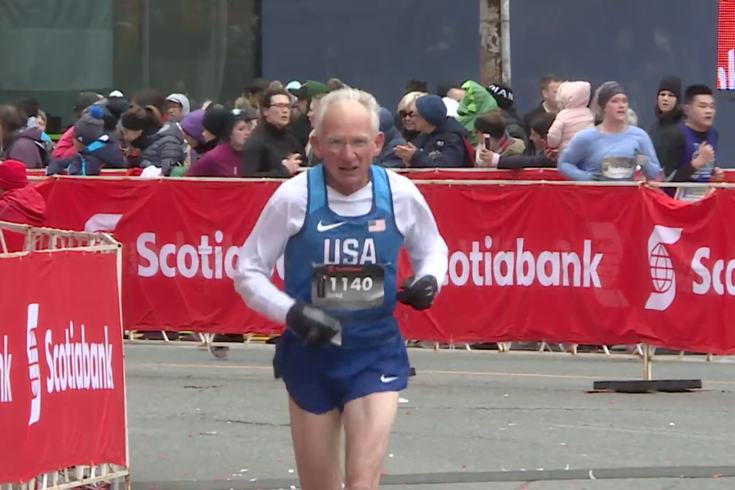 Gene Dykes, a 70-year-old running machine and retired computer programmer from Bala Cynwyd, set a world record for his age group on Dec. 15 by running a 2:54:23 marathon.

Before we move on, let’s run that back: Gene Dykes is a 70-year-old man who ran a marathon in under three hours.

Must be something in this Philadelphia County water.

Dykes’ phenomenal race at the Jacksonville Marathon over the race broke a 14-year record thought by many to be unbreakable. Dykes shattered Canadian distance runner Ed Whitlock’s world record for a marathon by a 70-year-old by 25 seconds, averaging 6:39 per mile.

Congratulations to American M70 Gene Dykes of Pennsylvania on achieving a new WMA M70 record, by breaking Canadian Ed Whitlock’s marathon record.(pending approval) . Gene Dykes ran 2:54:23 on December 15, 2018, breaking the previous record of 2:54:48, set by the legendary Canadian Masters athlete, the great Ed Whitlock. Ed set the WMA Masters record in 2004, at the Scotiabank Toronto Waterfront Marathon. Gene recently raced in the same race where Ed achieved his record. On October 21, 2018, the STWM served as the WMA Marathon Championships. Gene ran 2:55:17 just missing the M70 marathon record by 30 seconds. . . Following his race at the STWM, Gene went on to race a 50km Ultra Marathon, the Vista Verde Skyline on December 1, 2018 and then on December 2, 2018 Gene ran in the California International Marathon. A lot of running and a lot of racing for Gene and a huge congratulations to Gene on his W70 WMA record! 📸: @runnersworldmag . #mastersathlete #marathon #runner #worldrecord #stwm2018 #runcrs @usatfmasterstrack @usatf @athleticscanada @athleticsont @runcrs

Interestingly, Dykes has only been seriously training for distance running for about five years.

He ran high school track in Ohio and then at Lehigh University, but he took a break for dozens of years from dedicated racing, according to the Bucks County Courier Times.

Dykes got back into the swing of running in 2004, and started consistently racing around 2011. In 2013 he hired a coach.

The rest is history, and now it’s in the record books.