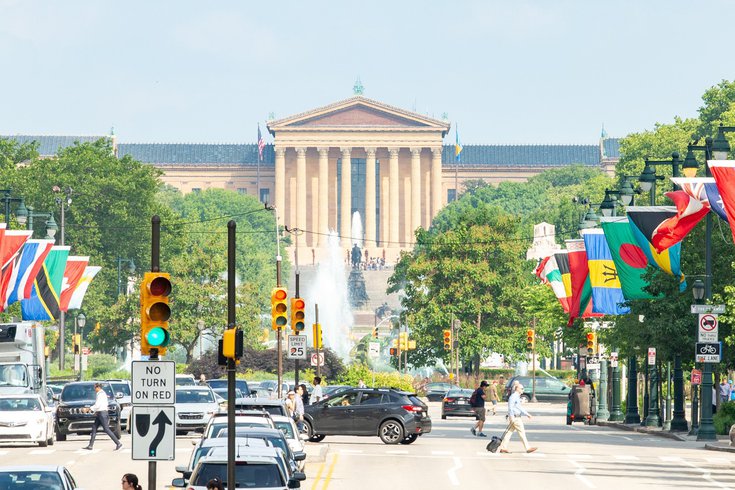 As the city works on a plan to redesign the Ben Franklin Parkway, it seeks input from the public. There are several opportunities to participate in the planning process, including an online survey that is available to complete now through Aug. 15.

The Benjamin Franklin Parkway was one of the earliest examples of urban renewal in the U.S. when construction began in 1917. Now, it's in need of renewal again.

The city is in the planning stages of a more pedestrian-friendly redesign of the parkway, a process expected to last between a year and 18 months. As part of this, Philadelphia officials announced on Tuesday they are seeking the public's input this summer.

"This project represents the next stage in a decade-long journey to right the balance between 'park' and 'parkway,'" Matt Rader, the president of the Parkway Council, said. "It will provide all Philadelphians the opportunity to take a fresh look at this iconic mile of our city."

The Parkway Council is coalition of cultural institutions, schools, residences and business along the parkway. It is partnering for the planning stages of the redesign with Philadelphia Parks & Recreation, the Office of Transportation, Infrastructure & Sustainability and the Design Workshop, the international firm hired by the city to lead the project.

The public will have several opportunities to participate in the planning process, including an online survey that is available to complete now through Aug. 15. It asks participants about how and how often they use the Ben Franklin Parkway, along with questions about the times of year people use use the parkway the most and the amenities and attractions they would like to see added to the area.

The public's input also will be collected at the Oval XP festival that begins Thursday on Eakins Oval and at the Wawa Welcome America festival on the Fourth of July.

And then at Thursday, June 21, at 5 p.m. there will be a lecture and panel discussion about the project at the Barnes Foundation.  Design Workshop representatives will speak about the project, and Philippe Chiambaretta, an architect who recently worked on the redesign of the Champs-Elysees in Paris, will be among a panel of experts to talk about importance of such projects. (Jacques Greber, the French landscape architect who created the original plans for the Benjamin Franklin Parkway in the early 20th century, modeled his design on the iconic French boulevard).

The event at the Barnes will take place in-person and be livestreamed. It is open to the public, but guests must RSVP to attend.

The redesign of the Ben Franklin Parkway has been in the works since 2013, when the city and PennPraxis jointly released a report titled "More Park, Less Way" that made recommendations about ways to make the parkway more pedestrian friendly, among other improvements.

So far, the plan has resulted in additional green spaces, like the new park around the Maja sculpture and the Winter Street Greenway. There are also new car and pedestrian infrastructure like rumble strips, improved traffic indicators and expanded sidewalks.

Note: Portions of this article were changed after it was originally published.