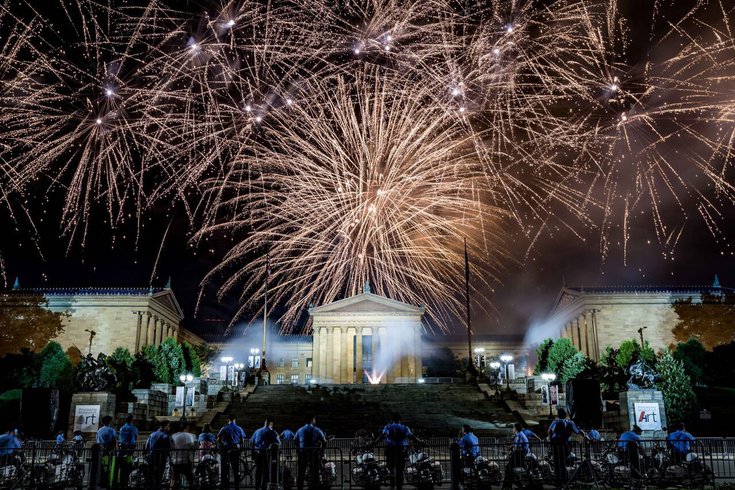 Wawa Welcome America's 16-day Independence Day festival is back in Philadelphia from June 19 to July 4, culminating in a concert on the Benjamin Franklin Parkway featuring celebrating headliners Jason Derulo and Ava Max.

Wawa Welcome America is back. Philadelphia's Independence Day festival is being held over 16 days this year, from June 19 through July 4.

After two years of virtual programming and an altered lineup, this year's festival is entirely in-person. The event will feature live performances, free museum admission and cultural celebrations leading up to the Fourth of July concert and fireworks display.

After virtual performances were broadcasted live from The Met Philly with no audience due to the COVID-19 pandemic in 2020, the event was moved to the Mann Center for Performing Arts in 2021. This year, the Fourth of July concert is returning to the Benjamin Franklin Parkway at 7 p.m.

Like last year, 2022's concert has two major celebrity headliners: pop singer Ava Max is set to open the show and former headliner Jason Derulo is returning to the concert after his virtual performance in 2020. The concert is free, but tickets are required.

Derulo has had several hit songs over the years, including "Savage Love," "Want To Want Me" and "Trumpets." He told fans on Tuesday that he was excited to have the opportunity to perform in person at the concert and return as a headliner.

Max, known for chart-topping songs like "Sweet But Psycho" and "Kings and Queens," is performing her hit songs as well as her latest track, "Maybe You're The Problem," which was released on April 28. Both artists have collaborated before, with 2018's "Make Up" with DJ Vice.

We said it. We’re bringing back @jasonderulo and @AvaMax to perform for you live from the parkway for this year’s @wawa Welcome America July 4th concert! Click here to learn more about this years events: https://t.co/N0haxuc3bu pic.twitter.com/I7TNuvmSjT

The concert concludes at 9 p.m. before the Fireworks Spectacular over the Parkway. Guests are invited to gather to watch the display, or check out the fireworks soundtrack on 106.1 The Breeze. The concert and fireworks display are being broadcasted live on both NBC10 and Telemundo.

The 16-day festival will look more like it did prior to the pandemic, said Wawa Welcome America president and CEO Michael DelBene.

The festival kicks off on June 19 for the Juneteenth Party at the African American Museum of Philadelphia. From 11 a.m. to 4 p.m., guests are invited to the outdoor block party to celebrate the legacy of emancipation.

The event will have live performances from local artists, a vendor marketplace featuring Black-owned businesses, food trucks and hands-on activities like line dancing and art-making. The event is free to the public, but registration goes live on AAMP's website on June 1.

Wawa Hoagie Day is scheduled for June 29 from 12 to 3 p.m. along Independence Mall. Wawa is giving away seven-tons of free hoagies, accompanied by a performance from the Six String Soldiers of the United States Army String Band. 960 additional Wawa locations are giving away more than 30,000 hoagies to local first responders and community heroes.

Another Welcome America favorite, "Rocky," will be screened outside of the Art Museum on June 23 from 8 to 10 p.m. Guests are encouraged to watch the film under the stars on the Art Museum steps.

Guests at the Gospel on Independence are encouraged to bring their own chairs and blankets, and can enjoy pay-as-you-go food from the Bourse food hall.

Other events through the 16-day festival include a ribbon cutting for the Rebuild Philadelphia Fishtown pool at the Fishtown Recreation Center on June 21 from 3 to 7 p.m. The ribbon cutting ceremony includes food trucks, live music and a chance to take an inaugural jump in the pool, which has been shut down since 2016.

The full lineup of festivities culminates in three large events on the Fourth of July. The Party on the Parkway runs from 12 to 7 p.m., followed by the concert at 7 p.m. and the Fireworks Spectacular at 9 p.m. All events are free to the public.

This year, Wawa Welcome America is expanding its free museum admission program with 28 museums. Some include the African American Museum of Philadelphia, the National Liberty Museum, the Museum of Illusions, the Barnes Foundation and the Weitzman National Museum of American Jewish History, among others.

Tickets and additional information will be added to the Wawa Welcome America official website through the beginning of the festival.