Bicyclists: Greater enforcement needed to clear cars from their lanes

A cyclist navigates around vehicles parked in the bike lane on the 1800 block of Spruce Street.

Travis Skidmore is an avid Philadelphia bicyclist who bikes anywhere and everywhere – from the grocery store to the library – sometimes with a kid or two strapped into accompanying seats.

Yet, as Skidmore bikes throughout the city, he says he “constantly” must swerve around vehicles parked in lanes reserved for bicycle traffic.

Not only do the blocked lanes present an inconvenience, but bicyclists say they also constitute a public safety issue. And it’s an issue bikers say the city must better enforce as Philadelphia aims to become more bicycle-friendly.

“It’s rampant,” said Skidmore, a bike mechanic and the co-publisher of PhillyPedals.com. “As a whole, bicycles don’t get respect as a vehicle and they’re suffering the consequences. … The people who could be enforcing it are looking the other way. It comes down to a public health issue. You're building a bike lane, but you're not enforcing it.”

The city already closes Martin Luther King Drive on warm-weather weekends and boasts some 400 miles of bicycling infrastructure, including 230 miles of bike lanes. But bicyclists say they do little good if motorists frequently block them.

“As a cyclist, that means having to pull out into traffic, which can be challenging,” said Katie Mundie, a biking advocate who routinely posts videos of her experiences to YouTube. “Sometimes, there are cars that don’t want to let you in.” 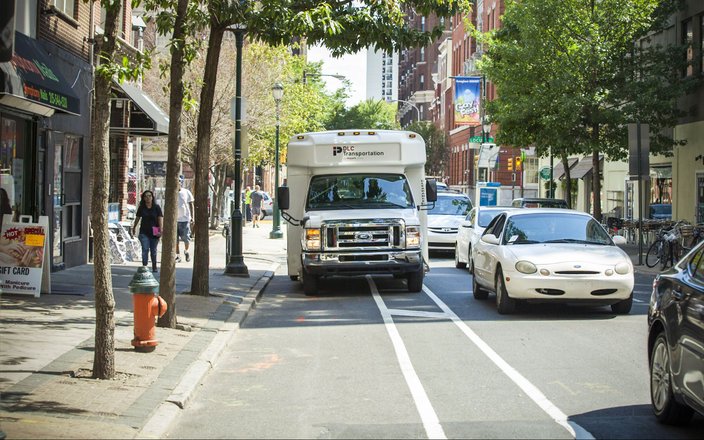 In an effort to bypass traffic on 13th Street, this DLC Transportation driver used the bike lane as a travel lane, blowing his horn at pedestrians and cyclists in his path. (Thom Carroll / PhillyVoice)

Both the Philadelphia Parking Authority and Philadelphia police issue citations to motorists who park in bicycle lanes.

The PPA and police cited 1,941 motorists for blocking bicycle lanes during the campaign’s first year, according to figures released by the PPA in May. Bicyclists used the hashtag to report at least 270 incidents.

“You can’t get people warmed up to the idea of bike lanes and bike share if people are going to be parked in the bike lanes and you’re just going to shrug.” – Travis Skidmore, avid bicyclist

"Based on changing violation points, staff deployment can be adjusted and new problem areas emphasized," Fenerty wrote in an email. "As a result of this strategy, we have seen a 42 percent increase in ticket issuance in the most problematic areas, by comparing tickets issued December 2012-2013 (1,369) and tickets issued December 2013-2014 (1,941)."

Fenerty says the PPA continues to make adjustments based on the information it receives from the Twitter campaign.

The Bicycle Coalition of Philadelphia worked with the PPA to develop the #UnblockBikeLanes campaign, an effort to help the PPA identify the most obstructed lanes, which include stretches of Spruce, Pine, Fairmount and Lombard.

The Bicycle Coalition suggested the PPA add officers to these locations or have others rove on bikes, Communications Manager Randy LoBasso said. Signage noting penalties also could help.

But LoBasso said the PPA first wants to continue collecting information. The organizations remain in conversation, but LoBasso described their relationship as falling into a state of “purgatory.”

“We wanted to see some action with the information they already had,” LoBasso said. “We haven’t seen that yet.

“No city has found the panacea to this, but we are trying to figure something out. As more and more people bike in Philadelphia … we really can’t have this kind of behavior by motorists.” 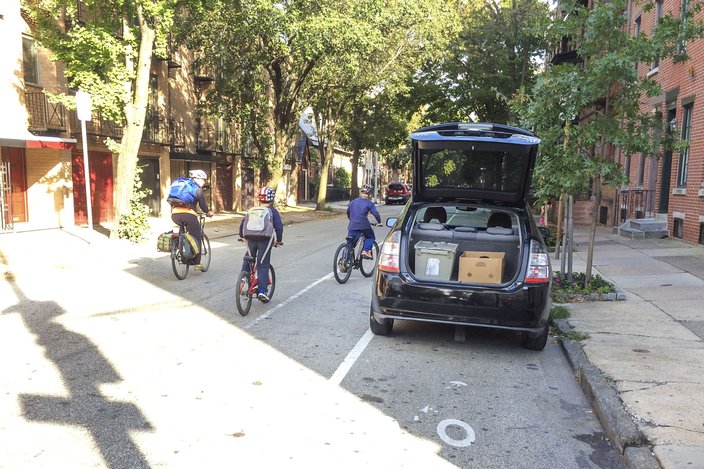 Lori Aument of Center City and her two sons, age 6 and 9, are forced to exit the bike lane into the travel lane on Pine Street to avoid a parked vehicle. (Thom Carroll / PhillyVoice)

While blocked bike lanes present some troubles for bicyclists, police say a right-hand bicycle lane is often the proper loading position for motorists. Police say it is safer for a bicyclist to merge into traffic than for a motorist to veer into a bike lane.

Police did not directly respond when asked whether the launch of Indego prompted greater emphasis on clearing lanes. Avid bicyclists say Indego added many novice bikers to the city’s streets.

Taylor Kuyk-White, an instructor at Neighborhood Bike Works, said the dangers are so prevalent that merging skills are incorporated into every class she teaches.

“In my experience leading rides with young people, this (danger) is particularly heightened, especially if you have a whole group of young folks moving in and out of the bike lanes constantly,” Kuyk-White said. “It then means the traffic has to merge around an obstacle in what should be a free-moving lane.”

Shelly Salamon, owner of Fairmount Bicycles, said she often rides on smaller streets — without bike lanes — because there is less traffic and bike lanes too often are blocked.

“I have never biked on Spruce or Pine without seeing at least one car in a bike lane,” Salamon said. “Usually, it's multiples. I don’t mean to sound like a brat, like give me my bike lane, but it makes you merge into car traffic when you don't have to.”

Even if the PPA and police don’t write more tickets, Salamon suggested they urge motorists to move by flashing their lights — the same way they warn cars stopped in other restricted zones.

Bikers also suggested the city expand loading zones or fully paint the lanes, making them distinguishable to motorists. Others suggested adopting protected lanes, in which planters, bollards or curbs separate motorists from bicyclists. The latter suggestion would go a step farther than the bike lanes on Spruce and Pine streets, which are buffered by a small, paint-designated shoulder.

Their suggestions varied, but bikers all agreed greater enforcement would go a long way toward ensuring their safety.

Said Skidmore: “You can’t get people warmed up to the idea of bike lanes and bike share if people are going to be parked in the bike lanes and you’re just going to shrug.”