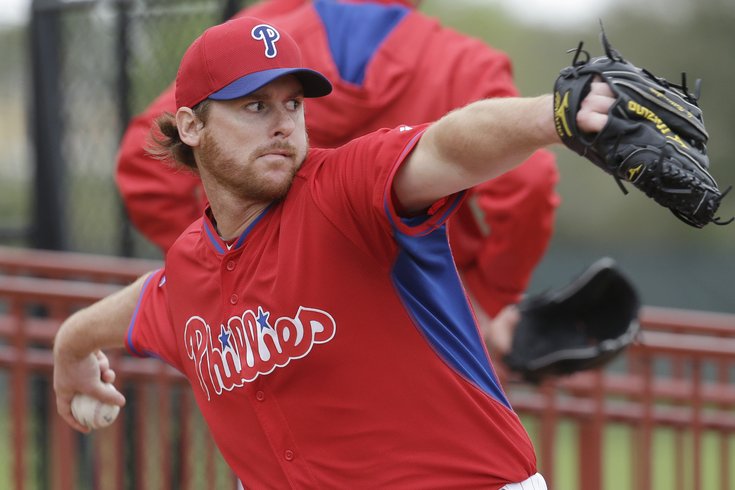 Phillies pitcher Chad Billingsley will start for the first time since missing the last two seasons with injuries.

Phillies fan or not, you should be rooting for Chad Billingsley tonight.

It's been more than two years since he's pitched in a major league game due to multiple injuries, but the 30-year-old righty will take the hill Tuesday night in Atlanta as the Phillies try for their first three-game winning streak of the season.

Billingsley was all smiles on Monday, naturally, as he talked to reporters at Turner Field about what it means to be back in the majors. More from Ryan Lawrence of the Philadelphia Daily News:

"[First] Tommy John, then after the flexor tendon, it was, 'Man, am I ever going to pitch again? Am I ever going to get back?' " Billingsley said. "And here I am right now. I'm taking the field [tonight] and pitching on a big-league mound."

"It's going to be really fun," said Billingsley, whose last major league game was on April 15, 2013. "I've missed that part of the game, having my mind worry about the hitters and not worrying about [my arm]. I'm just really happy and relieved. This is all in the past now. It's been two years since I've been out there every fifth day on a regular basis. It hasn't really sunk in yet."  [philly.com]

The fact that Billingsley has battled back from two significant injuries -- Tommy John surgery in 2013, followed by flexor tendon (elbow) surgery last summer -- is only part of the reason you should be rooting for him to succeed. It's more about the giddy, child-like approach he has taken regarding his Phillies debut. He sounds like a kid on Christmas Eve. It's both adorable and gut-wrenching at the same time.

Adorable because he's filled with the same kind of excitement and awe you'd expect from a rookie making his first start.

Gut-wrenching because we, unlike Billingsley, already know there will be nothing but coal under the tree. This isn't the Phillies team Billingsley remembers from his time with the Dodgers.

In his last full season (2012), the Phillies finished 81-81. He faced them once that season, in front of 43,000-plus fans at Citizens Bank Park. And while that's not the height of the Phillies dominance in the late 2000s, it's still a far cry from what they've become in the two and a half years since.

For much of his career, Billingsley saw the Phils as a powerhouse. Three of his six career postseason starts have come against the Phillies, and it's not hard to see why he learned to fear their once-potent lineup. Just take a look at his game log:

*The Phillies led MLB in total and average attendance in 2012.

His old team, the Dodgers, are not only in first place in the NL West, but they're also currently leading the league in attendance.

Regardless, Billingsley seems elated to be returning to the big leagues, and after two-plus seasons of surgeries, bullpen sessions, pitch counts, and rehab assignments, it's hard to blame him.

Signed to a one-year deal in January, the former first-round pick of the Dodgers won't have much of an issue finding a spot in the Phillies rotation, which is currently second-to-last* in the National League with a 5.10 ERA. However, it remains to be seen just how much a 30-year-old coming off two elbow surgeries can actually contribute.

In four starts with the Lehigh Valley IronPigs, Billingsley went 1-1 with a 4.74 ERA, averaging just under five innings per start. He'll need to offer more than that to a Phillies rotation that is already forcing its bullpen to do more work than all but two other NL teams.

Here's a look at his up-and-down game log during his rehab assignment with the IronPigs:

Asked Monday what he thinks he can add to the Phillies rotation this season, and more specifically, if he thinks he can stay healthy for the entire season, Billingsley told reporters the following:

His long road back to the bigs will come to an end tonight in Atlanta, but that doesn't mean the tough times are over for Billingsley. It's only a matter of time before he finds out there's no Santa, his giddiness to giving way to the all-too-familiar dejection that follows such a revelation.

Luckily for Billingsley, he's been unknowingly preparing for this season ever since his injury, long before he was signed by the Phillies, when his doctor told him he wasn't allowed to lift anything over five pounds.

"Lifting a drink or something was fine," he told reporters Monday.

He may need more than a few of those to get through this season.