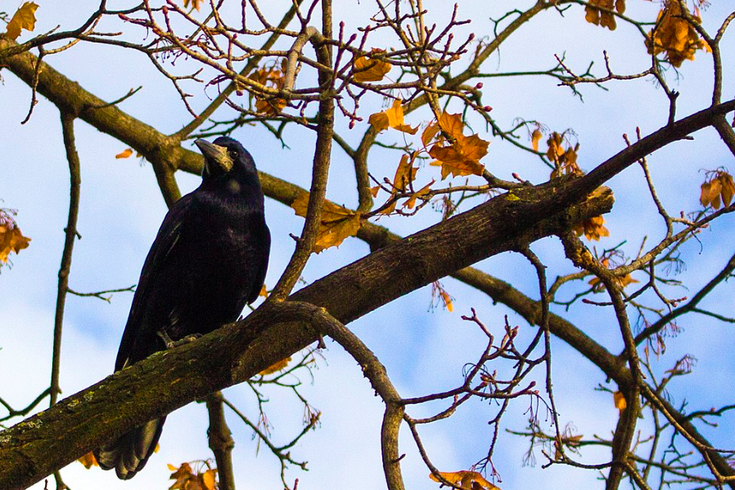 Crow on a branch.

If watching the new Netflix feature "Bird Box" gave you nightmares, you may want to move to the Allentown area.

That's where thousands of birds — a murder of crows, specifically — have spent the last month roosting.

The appearance of the migratory birds coincides with the viral popularity of Netflix's unnerving new movie, in which an unseen presence causes an epidemic of mass suicide around the world. Birds, for reasons unknown, have a sixth sense for the presence. They warn people, who are forced to wear blindfolds, when danger is near.

Every night at dusk for most of the past month, the corvid crows have descended along the Allentown-Hanover Township border, according to The Morning Call.

'Their home now:' Hundreds of crows swooping down from American Parkway along wooded area in east Allentownhttps://t.co/rkVNUQcUrb pic.twitter.com/6jUrXx4idt

The birds have made the grounds of the Congress Apartments their nightly resting place, flapping and leaving their excrement everywhere, residents of the 548-unit complex said.

Peter Saenger, an ornithologist and president of the Lehigh Valley Audubon Society, told the The Morning Call that the Lehigh Valley historically has been a popular winter roosting location for crows. As many as 35,000 of them may call the area their home for an extended period of time.

Until late last year, this story's most direct film parallel would be Alfred Hitchcock's 1963 horror film "The Birds."

But maybe in 2019, the crows are offering a safe haven from the presence in Allentown.

Either way, listen to Netflix and don't be foolish enough to try the Bird Box challenge.