"We always hear that it's just a number of bad cops, but where are the good cops coming out and speaking up?" asked one organizer 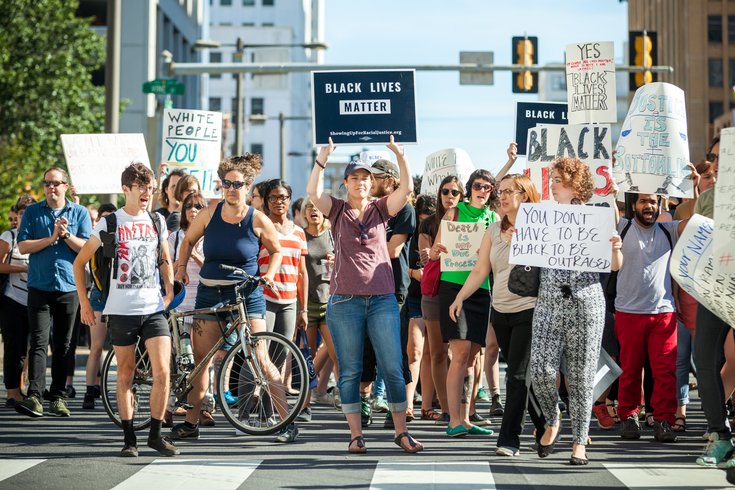 Protesters from the group SURJ (Showing Up For Racial Justice) blocked traffic at the intersection of Broad and Vine Streets Monday morning as they marched through Center City Philadelphia.

For the sixth straight day, protesters united under the chant of Black Lives Matter took to the streets of the city on Monday morning, hoping to make their voices heard.

About 50 protesters gathered at City Hall at 8:30 a.m. for a memorial organized by Stepping Up for Racial Justice or SURJ – a group that describes itself as "a national network of groups and individuals organizing white people for racial justice."

Organizers read a list of names of those killed in recent police shootings, including Alton Sterling, a 37-year-old man killed in Baton Rouge, Louisiana, and Philando Castile, who was killed during a traffic stop in Minnesota. Protesters then marched down John F. Kennedy Boulevard to 16th Street over to Vine Street and back to City Hall along Broad Street.

Like recent protests throughout the city and elsewhere, the marchers chanted in support of the Black Lives Matter movement. Unlike previous recent protests, however, the majority of the participants were white, carrying signs that read "White silence is violent" and "You don't have to be black to be outraged."

According to organizer John Bergen of Philadelphia's branch of SURJ, it's time for white people to step up and speak out in support of minorities, especially in light of so many recent, high-profile fatal police shootings.

"We benefit from white privilege," he said. "And, we come from a situation where black lives don't matter."

Bergen added that he feels the lives of "black and brown" members of the community don't seem to matter to the justice system as officers involved in recent fatal shootings haven't faced many repercussions. Most, he argued, haven't even lost their jobs.

"I'd like to see police officers fired for shooting and killing people. That seems reasonable to me." – Protester Margie Sanderson of West Philadelphia

Bergen pointed specifically to the Philadelphia police shooting of Brandon Tate Brown, a 26-year-old man who was shot to death by police officers during a traffic stop in 2014,  noting that no officers have been charged in that shooting.

"We always hear that it's just a number of bad cops, but where are the good cops coming out and speaking up?" he asked.

SURJ is calling on Mayor Jim Kenney, the Fraternal Order of Police and all elected local officials to denounce the actions of officers involved in the fatal shootings and to promise that the officers involved would be held accountable for their actions, Bergen said. 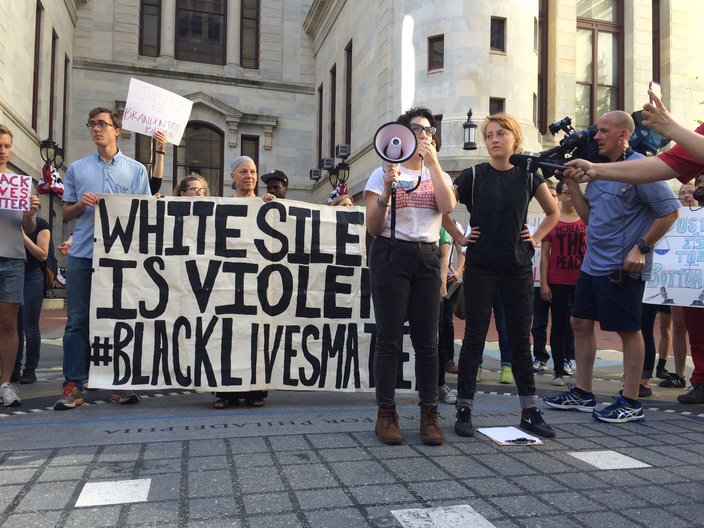 Nora Kerrich of West Philadelphia leads a chant in support of the Black Lives Matter movement during a protest at City Hall on Monday morning.

"These officers' behavior isn't going unnoticed and they are going to be held accountable," agreed fellow protester Margie Sanderson of West Philadelphia. "I'd like to see police officers fired for shooting and killing people. That seems reasonable to me."

For about 45 minutes, the marchers wove their way around Center City, stopping at the center plaza at City Hall for speeches and a moment of silence for those who have died in recent police-involved incidents.

After the rally, Nora Kerrich and Morgan Bartz, both of West Philadelphia, said they wanted to join in on Monday morning to continue the momentum of recent protests in Philadelphia and beyond to highlight white privilege and the Black Lives Matter movement.

"White folks need to step up in this moment," said Bartz.