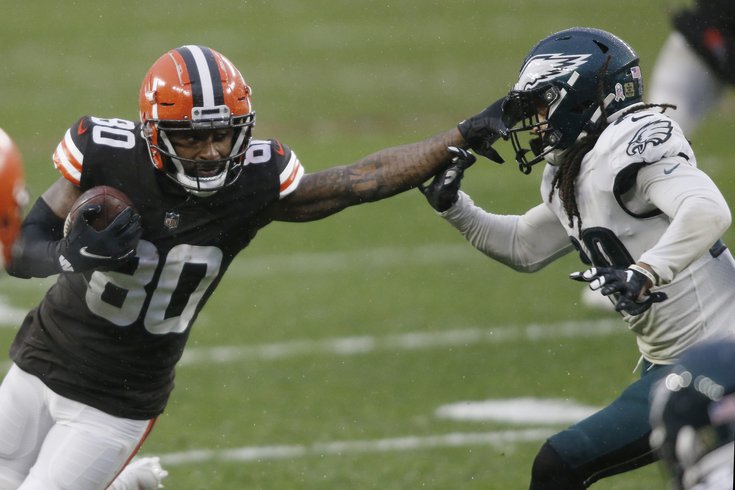 There are basically no good takeaways from the Eagles' miserable 22-17 loss to the Cleveland Browns on Sunday, their first against this team since Bill Belichick coached the Browns in 1994.

Performances like the one Eagles fans got yesterday call for a reminder of brighter days in the city's sports landscape, and since Super Bowl LII suddenly feels as if it might have been a hallucination, we'll turn to the NBA.

Browns wide receiver Jarvis Landry must have marked the game against Philadelphia on his calendar, because he showcased a pair of cleats on Sunday that paid tribute to Sixers great Allen Iverson.

With the Browns playing Philly today @God_Son80 wanted to pay tribute to one of the greatest who ever did it in the City of Brotherly Love, the Answer @alleniverson. pic.twitter.com/GGprOy4oaV

Because of the NFL's senseless orthodoxy on uniform policies, Landry could only wear the cleats during pre-game warmups. But it's the thought that counts.

In a sloppy game, Landry caught just two passes for 23 yards on Sunday. The Browns were the beneficiaries of so many deflating Eagles mistakes that their mediocre offensive performance didn't end up mattering.

Somehow, the Cleveland Browns are 7-3 and in second place in the AFC North, while the Philadelphia Eagles are 3-6-1 and in first place in the NFC East.

MORE: McMullen: Eagles are stuck in a bad marriage with Wentz | Handing out 10 awards from the Eagles-Browns game