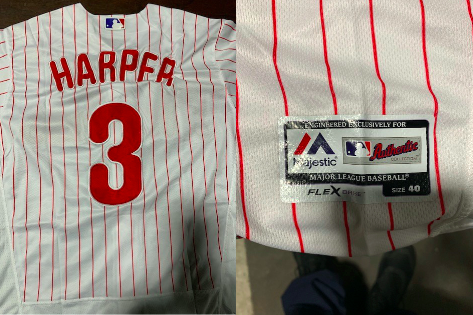 Six shipments of these counterfeit jerseys for Philadelphia Phillies outfielder Bryce Harper were destined for addresses in the Delaware Valley.

More than 300 counterfeit Bryce Harper Phillies jerseys have been seized at the Port of Philadelphia in the weeks since Opening Day, Customs & Border Protection officials said Friday.

Authorities said the jerseys — 314 in all — arrived in six express delivery shipments, all from Hong Kong. Each shipment had a final destination somewhere in Pennsylvania, New Jersey or Delaware.

Had the jerseys been authentic, they would have been worth $44,040, officials said.

"Transnational criminal organizations counterfeit popular consumer products and Mr. Harper’s Phillies jersey is among the hottest consumer goods selling today, so it was a good bet that we’d start seeing counterfeit Harper jerseys,” said Casey Durst, CBP director of field operations in Baltimore. “Customs and Border Protection officers will continue to work closely with our trade and consumer safety partners to identify and seize counterfeit merchandise, especially those products that may potentially harm our nation’s consumers.”

Judging by the photos shared by CBP officials, it's hard to imagine anyone being fooled by the jerseys, or wanting to be seen in them. Who would want to wear the cheapest version of an "authentic" jersey for one of baseball's most highly paid players? Just get the replica or the shirt and spend your money on tickets.