The drugs were in the midst of being transported from California to New York; Two people were arrested 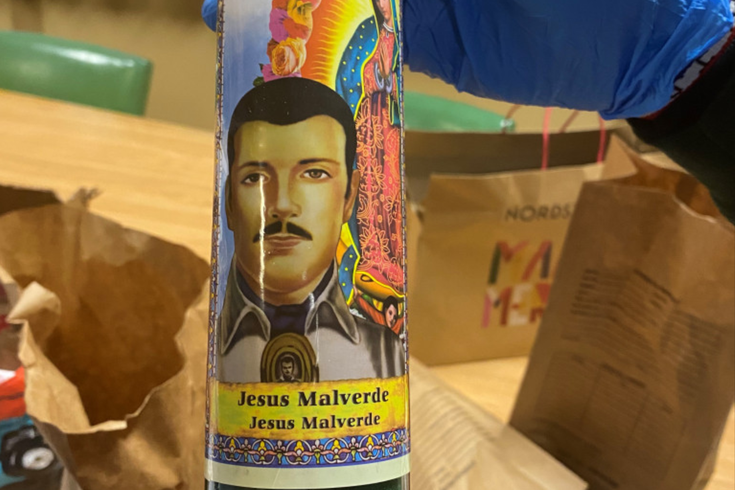 A traffic stop in Bedminster, Bucks County, uncovered $4 million of cocaine, heroin and fentanyl on Jan. 29, 2021. Police also seized several candles, like the one above, depicting Jesus Malverde, who parts of Mexico is known as the patron saint of drug traffickers. Investigators believe the driver and passenger in the stopped car are part of a larger drug-distribution operation.

A routine traffic stop in Bedminster Township last Friday led authorities to a massive seizure of cocaine, heroin and fentanyl that was on its way from California to New York, authorities in Bucks County said Thursday.

The drug bust, valued at $4 million, resulted in the arrests of a man and woman who investigators believe are part of a much larger narcotics-trafficking organization.

Bedminster police had pulled over a Jeep on Friday night after it swerved over a fog line several times. The driver of the vehicle consented to a search, resulting in the seizure of one kilogram of heroin/fentanyl and nine kilograms of cocaine with a total street value of $1.2 million, prosecutors said.

Information obtained during the bust led to the search of a tractor trailer at a truck stop in Lehigh County on Wednesday night. Authorities recovered nine more kilograms of heroin/fentanyl valued at $2.7 million.

The two searches also led to the seizure of more than $43,000 in cash, a handgun. six cell phones and additional drugs, including almost $29,000 in Percocet pills, Bucks County District Attorney Matt Weintraub said at a news conference on Thursday.

The driver of the Jeep was identified as 28-year-old Christian Ochoa, of Laredo, Texas. Investigators believe he drove the drugs from California and was likely passing through Bucks County incidentally on his way to New York.

"We saved somebody else a lot of heartache and pain," Weintraub said of police intercepting the drugs before they reached their final destination.

The passenger in the vehicle was identified as 27-year-old Edith Tomasa Rodriguez Cardenas, of Huntingdon Park, California.

Ochoa and Rodriguez Cardenas were charged Friday night in the initial traffic stop with narcotic possession with intent to deliver, conspiracy and related drug offenses. Both were arraigned and sent to Bucks County Correctional Facility under $1 million bail each.

According to prosecutors, the tractor trailer at the truck stop was parked in Upper Macungie Township and had the logo "Ochoa Transport Services." The vehicle contained a legitimate load of agricultural products in addition to the drugs, investigators said.

"As you all know we are in the midst of a twin pandemic," Weintraub said. "We were already in a pandemic before we heard the word COVID-19 and that is the drug scourge that we 've been battling for years. And as a result of the COVID pandemic, drug overdoses are up."

Weintraub thanked collaborators in law enforcement for their work in taking drugs off the streets.

"Because of it, so many of our loved ones will not suffer a death at the hands of these narco-traffickers," Weintraub said.