The Eagles' second-round pick is a man of many talents 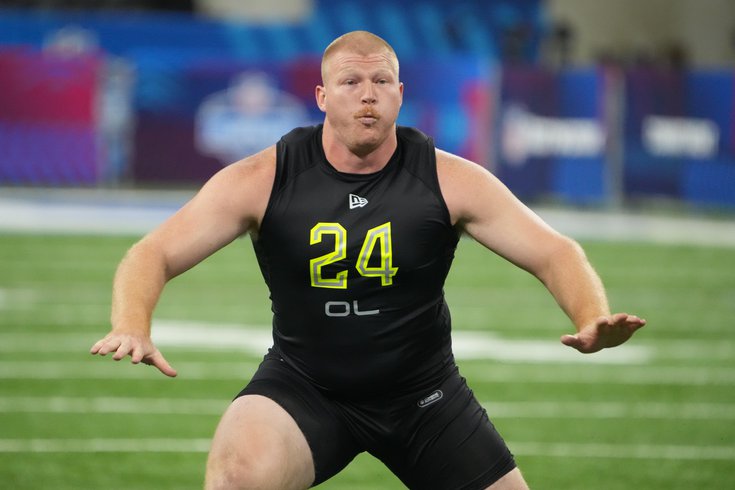 NFL football is a full-time job, so is cattle ranching.

"I would just say it never stops," Jurgens said after being selected 51st overall in the NFL Draft Friday night. "Farming never stops. You have to feed the cattle, I guess. There's a lot of stuff on the ranch to be done, and you have to treat them like they are family."

He's a man of many talents, just like current center Jason Kelce.

Coming out of Nebraska, the 6'3", 303-lb. lineman was taken by the Eagles in a clear move to prep for a post-Kelce future.

Kelce himself even helped with the selection during the evaluation process. He and Jurgens met during a pre-draft visit. They hit it off. Turns out, because of cattle ranching.

"It was good. We talked for quite a while," Jurgens said. "It was actually in the O-Line room with coach [Jeff Stoutland], he was quizzing me, going over the plays. And Jason Kelce walked in, and we started talking a lot about their offense and what I can do and how I can fit in.

"He started talking about how he just got some cows and is learning how to be a cattle rancher, and shoot, I grew up on a cattle farm and that's what I grew up around. We started talking some ranching and football and how we can help each other learn. It was just a great convo. Again, to meet someone like him that's such a superstar. He's down-to-earth and he's a good dude and somewhere that I can fit in really well."

So how does Jurgens look?

Well, I mean in football, great in college. That dude can be MEAN.

I feel bad for leaving him off my glass eater list pic.twitter.com/iDI5M3VDJB

Cattle-ranching? He uploaded this video last May.

Look at that technique! If he can box out a cow like that, there isn't any defender that's gonna get to the QB easily.

Jurgens has also shown off excellent strength and balance in wakeboarding.

May be a little sensitive to the sun though.

On a scale of bad to disgusting, guess how red my sunburn was after this range session? 🔥🔥 pic.twitter.com/FbeEgdqGnx

But overall, an ultimate outdoorsman, and, hopefully, a great NFL center in due time.