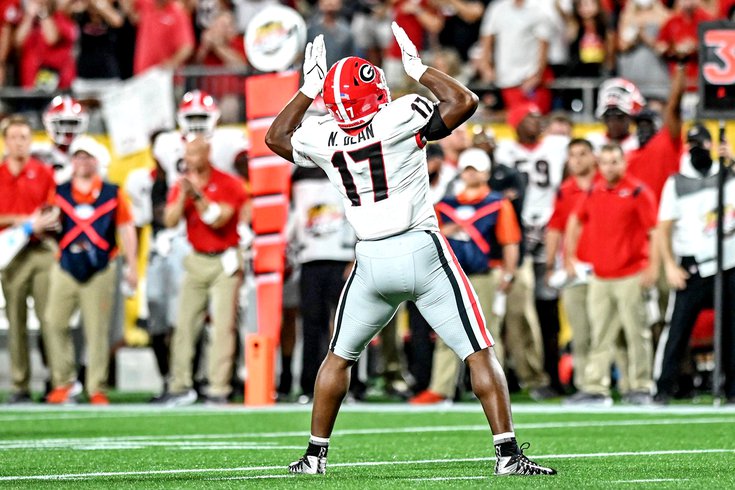 On Day 2 of the 2022 NFL Draft, the Philadelphia Eagles added their successor to Jason Kelce in Cam Jurgens, as well as the leader of the National Championship winning Georgia defense in Nakobe Dean. We'll find out how good Jurgens and Dean become over time, but for now, let's grade each move based on the process of the picks.

For the second consecutive year, the Eagles drafted a successor for Jason Kelce in the second round. Last year that distinction went to Landon Dickerson, who played center, guard, and tackle during his college career at Florida State and Alabama. This year it's Jurgens, who started at center in all 31 of his games played in Lincoln.

There were two centers linked to the Eagles in this draft — Iowa's Tyler Linderbaum, and Jurgens — mainly because they reminded draft experts of, well, Jason Kelce. Jurgens is a somewhat undersized but highly athletic center, as shown here:

He is also a prospect with a little nasty to his game. You can get a little taste here:

So, you can see why he drew some comparisons to Kelce.

That's for good reason. When teams draft running backs, wide receivers, tight ends, defensive linemen, linebackers, cornerbacks, or safeties, those guys don't have to be starters to get playing time. They can rotate in.

At quarterback, the offensive line, kicker, punter, and long snapper, the starters typically don't sub out of games. Obviously, there is no shortage of examples of teams drafting quarterbacks and having them sit initially, but it doesn't often happen along the offensive line, and it's particularly rare at center.

It's worth noting that when the Eagles drafted Dickerson last year, he could not be penciled in as an immediate starter either. However, he had more positional versatility than Jurgens, and the oft-injured Brandon Brooks was a projected starter. It felt likely that Dickerson would play substantial snaps as a rookie, and as it turned out, he did.

It is certainly possible that Jurgens could play guard if need be, but he does not have any guard experience, at all. The Eagles also already have robust depth along the interior of their line (including at center, by the way), so even if the Eagles think Jurgens can play guard, he might not be their choice in-season to be the first guy off the bench should Isaac Seumalo or Dickerson go down.

Last offseason, the Eagles were coming off a 4-11-1 season and nowhere remotely close to Super Bowl contention. If the Eagles were in that kind of situation this offseason, I may not protest quite as much. This year, you can squint hard and see a path through a really bad NFC. The ability to contribute immediately is only one piece when evaluating prospects. There's no doubt that the draft at its core is about the future, but certainly it's also nice when you can see early results.

Jurgens' path to playing time may only come via a Kelce injury. As a reminder, Kelce has started in 122 straight games, which is second-best in the NFL among all active players. It is assumed that Kelce is playing in his final season in 2022, and then he'll hang up his cleats. Of course, the same was assumed this time last year, and Kelce decided to come back for another season. If Kelce decides next year that he'd like to play one more year, does anyone think the Eagles will tell him no?

So how long exactly will it be that Jurgens sits during the four-year window of his rookie contract?

But he was the best player available!

When I took to Twitter to point out some of the reasoning against taking a center in Round 2 when the team already has a Hall of Fame center on the roster still playing at a Hall of Fame level, a common response was something to the effect of, "But Jimmy, you always say the Eagles should take the best player available and then when they do you bash them, you dirty scumbag hypocrite piece of garbage."

Jurgens may very well have been the best player on the Eagles' board when they picked, but it's not as if he was some sort of prospect where anyone was saying, "Good Lord, how is this guy still available?" He got picked in the vicinity of expectations, or maybe a slightly earlier at pick 51.

The Eagles' interest in Jurgens was known well before the draft. Tony Pauline of ProFootballNetwork even reported as early as Sunday that "Sources say Jurgens does not get past the Philadelphia Eagles’ 51st pick at the latest." It feels a little bit like the Eagles made their minds up well in advance that Jurgens was going to be their pick at 51, almost no matter what.

The Kelce stamp of approval

Kelce enthusiastically endorsed the pick, and even helped scout Jurgens.

"This is my favorite player in the draft," Kelce said during Bleacher Report's draft coverage. "I'm not just saying that because we picked him. The Eagles have been using me to evaluate some of the centers coming out and of all the guys that I've looked at, like for the past 2-3 years, out of all the guys that compare the most to myself, this guy is him.

"He is so athletic, so fast. You see him out in space, he runs. He's a natural athlete. You see the fluidity. He played tight end, a position convert. He's only been playing offensive line for two years...This guy is a freak athletically. He has the best chance to be a difference-maker at the center position. I like this kid a lot. I really do."

When fans were reassured by the center god himself, all worries about this prospect went out the window. Hell, the Eagles may have stumbled onto a new draft day strategy to win over fans. Just have a legend at the prospect's position stamp their approval, and any immediate blowback is gone. Safety? Call Brian Dawkins. Linebacker? Get Jeremiah Trotter to NovaCare, stat! (I'm kidding here, mostly. I do believe Kelce when he praises Jurgens because he legitimately loves him as a player, and not just because the Eagles picked him.)

I'll just conclude this section by noting that trying to find a carbon copy of Kelce does have its potential pitfalls. It took Jason Kelce years to become the legendary Jason Kelce that we know today, and along the way, there were rough years during which a decent number of fans would have wanted Kelce replaced. Drafting a prospect who is "the most like Kelce" will no doubt leads to expectations that, you know, he should be the next Jason Kelce, and fast. If he's not great immediately, there could be unfair criticism of this kid that wouldn't exist anywhere near as much in other cities.

Our own Nick Tricome has more on the Kelce-Jurgens lineage.

Final thoughts on the Jurgens selection

Ultimately, if there's a smooth, seamless transition from Kelce and Jurgens is very quickly a great player, then the above quibbling will no doubt seem silly, in hindsight. And if Jurgens can play guard immediately, potentially even replacing Seumalo in the lineup, then forget everything I said above.

Anything short of that, and it's really not a great use of resources.

Dean patrolled the middle of the field in Georgia's smothering, national championship defense in 2021. He's undersized, and while he did not work out at the Combine or Georgia's pro day, he's explosive on tape. Dean can cover running backs out of the backfield and blitz in the passing game. Against the run, he can either slither through blocks and make tough tackles in the box, or in pursuit outside of the tackles.

Dean is a three-down linebacker who can bring juice to the Eagles' defense in the middle of the field, where, oh by the way, they got destroyed in 2021. He was considered by many to be a first-round talent, but he unexpectedly fell to the third round because of injury concerns, specifically a pectoral injury.

So how debilitating will this pec injury be?

"He has a pec injury that does not require surgery from our doctor," Howie Roseman said Friday night. "He's going to be on the field this weekend. We don't anticipate missed time now. He'll come in here and take a physical, and we'll double-check all those things.

"Listen, I think I called our doctors three, four times to see am I missing something. We brought him in. Am I missing something? Because obviously this guy is way higher on our board, and we were considering taking him at – we talked to him before today because he was a consideration (in Round 2), and that's what we got."

Dean no doubt fell because of the injury, but also because he's small.

Fortunately for the Eagles, Dean doesn't play small, and in my opinion, getting him in Round 3 is an absolute steal.