The Eagles' first family, fresh off a comeback win against the Giants, will be having a baby girl 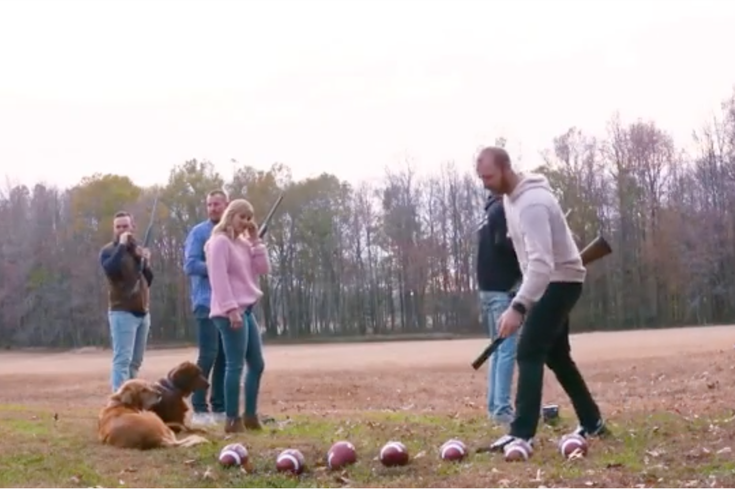 Carson Wentz and his wife Maddie Wentz chose quite possibly the most on-brand gender reveal of all-time.

Carson Wentz and his wife Madison Wentz chose quite possibly the most on-brand gender reveal of all-time, in a video shared on Wentz's Instagram account Tuesday.

The couple, who announced they're expecting their first child together on Thanksgiving, filmed themselves launching what appears to be a clay pigeon-style football in an open field, and then shooting said football to reveal (on the second try) a cloud of pink-colored dust.

That's right: the Wentzes' first child will be a girl.

Gender Reveal: Wentz Family Style 😎 Beyond blessed with this little one on the way! 🙌🏻 Can’t wait to meet you this spring!

Perhaps Wentz, an avid hunter and outdoorsman, can also use this video to teach injured wide receiver Nelson Agholor how to track a ball in the air.

MORE SPORTS: Handing out 10 awards from the Eagles-Giants game

The parents-to-be, who tied the knot in Bucks County last August, have yet to reveal when their first child is due. For now, the Wentzes have their eyes trained on the playoffs: the Eagles, currently 6-7 and tied for first place in the NFC East, are in the driver's seat as they battle the beleaguered Dallas Cowboys for the division title and a (perhaps undeserved) playoff spot.