Celebrate the Fourth the way the Founding Fathers did: With a beer

How the ale recipes from Washington, Jefferson and Franklin survive today 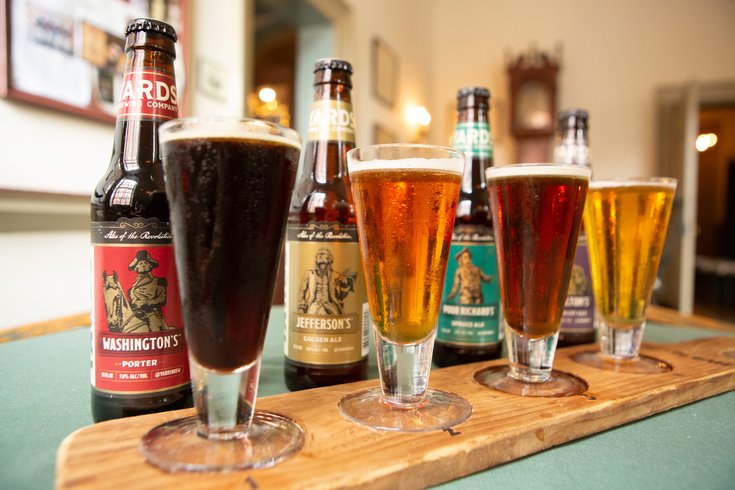 Yards Brewing Company's "Ales of the Revolution" at the City Tavern in Old City.

If the Founding Fathers celebrated the Fourth of July, they might have done it with a cold brew. And they probably made the draft themselves.

George Washington, Thomas Jefferson and Benjamin Franklin not only enjoyed beer and related drinks, but made them from recipes they learned or borrowed. You can taste what they drank at City Tavern in Philadelphia, which offers Washington's porter, Jefferson's ale, a “spruce ale” Ben Franklin imbibed, and an “every man's ale” or India Pale Ale, named for Alexander Hamilton. They are made at Yards Brewing Company in Philadelphia, which sells the first three in an “Ales of the Revolution” variety pack.

And the fathers were a hearty bunch: the drinks have an alcohol level of about twice that of today's beers and ales. According to Phil Gajari, who handles special events and public relations for the tavern, “the belief was that the higher the alcohol the better it preserved the beer. Thus imported beer, such as the India Pale Ale, was fairly high in alcohol content, between eight to 10 percent alcohol. Strong or dark ales were expected to last at least a year in a cask.”

Beer in the colonial times was as much a staple of life, if not more, than water.

The Pilgrims carried more beer on the Mayflower than water. According to one history of drinking in America, “this reflected their traditional drinking beliefs, attitudes, and behaviors. They considered alcohol to be a natural and normal part of life. They believed that God created alcohol and that it was inherently good.”

Stanley Baron in “Brewed in America: The History of Beer and Ale in the United States,” proclaimed, “It must be remembered that, in the seventeenth century, beer was the universal beverage of Englishmen and those who lived on the continent.”

According to Gajari, Walter Staib, Chef and proprietor of City Tavern, discovered Washington brewed his own beer while conducting research to create an 18th century menu for the restaurant. 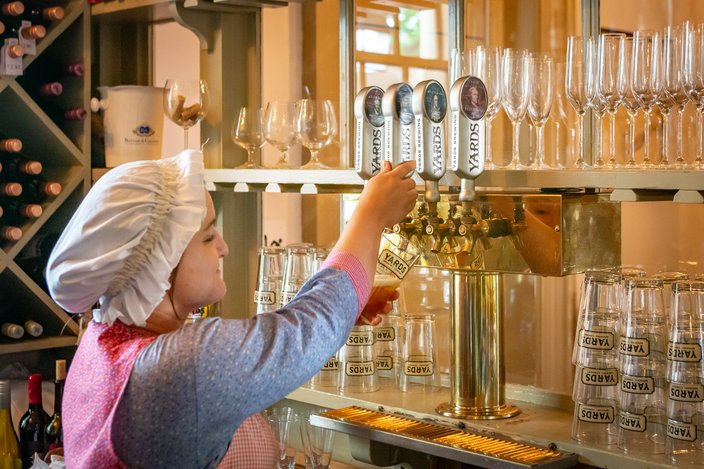 Bartender Janelle Grenfell pours one of Yards Brewing Company's “Ales of the Revolution” at the City Tavern in Old City Philadelphia.

Preserved in the manuscript collections of the New York Public Library is a notebook kept by Washington, which includes the following hand-written recipe:   “Take a large Siffer [Sifter] full of Bran Hops to your Taste. -- Boil these 3 hours then strain out 30 Gall[ons] into a cooler put in 3 Gall[ons] Molasses while the Beer is Scalding hot or rather draw the Molasses into the cooler & St[r]ain the Beer on it while boiling Hot. let this stand till it is little more than Blood warm then put in a quart of Yea[s]t if the Weather is very Cold cover it over with a Blank[et] & let it Work in the Cooler 24 hours then put it into the Cask -- leave the bung open till it is almost don[e] Working -- Bottle it that day Week it was Brewed."

“Jefferson’s recipe wasn’t as clearly printed out as Washington’s was,” said Gajari. “In fact, when someone once asked (Jefferson) for his recipe on beer, he famously replied, 'I have no receipt for brewing, and I much doubt the operations of malting and brewing could be successfully performed from a receipt.'”

Spruce ales had been around for centuries before Franklin's time. Many seafarers drank it to stave off scurvy. While Franklin was in France serving as ambassador, he wrote the following: “Way of Making Beer with Essence of Spruce:

“For a Cask containing 80 bottles, take one pot of Essence and 13 Pounds of Molases. – or the same amount of unrefined Loaf Sugar; mix them well together in 20 pints of hot Water: Stir together until they make a Foam, then pour it into the Cask you will then fill with Water: add a Pint of good Yeast, stir it well together and let it stand 2 or 3 Days to ferment, after which close the Cask, and after a few days it will be ready to be put into Bottles, that must be tightly corked. Leave them 10 or 12 Days in a cool Cellar, after which the Beer will be good to drink.”

Yards brews the beers using ingredients and methods of the original recipes, but employs now modern machinery to make them.

“We were a low-tech brewery when we started,” said Tom Kehoe, co-founder of Yards and now its president. “We had a flame underneath a kettle.” Kehoe said it took several tries to make each drink right. They experimented with using different types of malt to get the right caramelized flavor of the drink.

For the spruce ale, Kehoe said they went directly to the source: spruce trees. “We took the needles, and seeped them like a tea, that gave us the essence,” he said.

While not made by the first secretary of the treasury, the Hamilton ale is based on an “every man's” recipe from the period. “This ale was brewed in the style of the common man's ale, the India Pale Ale," said Gajari. (Apparently, Hamilton lived across the street from the original tavern.)  "In the 18th century, the English left their ports with beer for the British colonies. The only ales to survive the long journey to India were strong beers with more alcohol and more hops. Thus was born the India Pale Ale. Since Hamilton was frequently a diner -and drinker - at City Tavern, we named this style brew after him, a common man."

Porter, which Washington frequently drank, has a bitter quality to it. But if we envision Washington as the the father of our country, then this brew is representative of the man in that it is full-bodied and strong.

Jefferson's ale is a golden-colored drink that manages to be light but not weak.

Franklin's brew has a “spicy” zip to it, while the Hamilton beverage has a citrus flavor.

These are the only beers the restaurant sells, and they offer all four in a “sampler” of five ounce glasses that Gajari says is its biggest seller. 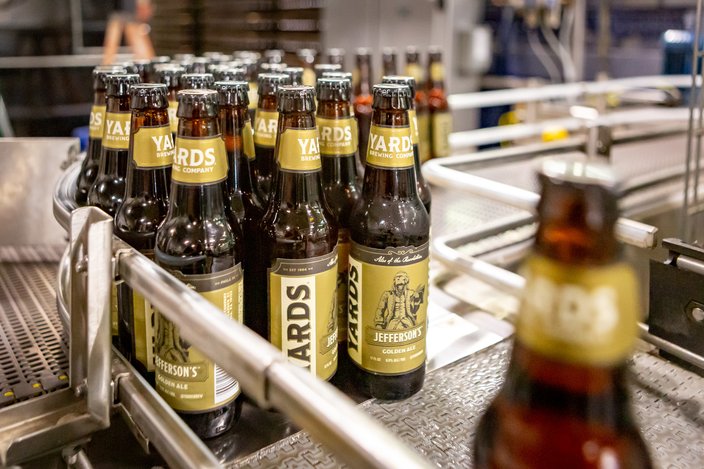 Jefferson's Golden Ale on the bottling line at Yards Brewing Company in Philadelphia.

City Tavern opened in December, 1773. It hosted members of the First and Second Continental Congresses and the Constitutional Convention of 1787. Washington met the Marquis de Lafayette there.

A fire in 1834 severely damaged it and the remaining structure was razed 20 years later. The National Park Service recreated the building to coincide with the nation's bicentennial in 1976.

This month, two suburban taverns founded in the 18th century will also be serving drinks and foods from the Revolutionary War era.

On July 6, The Black Powder Tavern in Wayne, founded in 1746, will serve “Beers of the Presidents” -- Jefferson's ale and Washington's porter. Also available is a “ patriotic beverage” from the era, Firecracker Lemonade, made with citrus vodka, blue curacao, and grenadine. There will also be historical impersonators portraying Ben Franklin, Martha Washington and James Madison, and a contest for best costume. A portion of proceeds will be donated to the nonprofit Valley Forge Park Alliance.

According to the inn's website, “It is believed that during the infamous winter of 1777–1778 at Valley Forge, a major figure in the Continental Army, master military mind Friedrich Von Steuben, designated the tavern as a secret black powder munitions stash for Continental Army couriers. All the while, the tavern continued to provide food, shelter and cheer to the hungry, weary soldiers”

On July 23, the General Warren Inn in Malvern, founded in 1745, will offer “Colonial Music and Dancing.” Patrons will learn the moves 18th century citizens did on the dance floor at balls and other social gatherings, while listening to period music. Musicians will be dressed in costume and playing instruments from that time.

The tavern is not far from the ground where the Battle of Paoli – or the Massacre of Paoli, from the American view point, says proprietor Patrick Byrne – was fought on September 20, 1777.

Ten times a year on a Monday night, General Warrren offers, “A Revolutionary Lecture Series.” An author or historian will make a presentation, and guests dine on 18th century cuisine and the Yards beverages.

Byrne said he and his chef used Staib's book on colonial cooking to determine the cuisine. The trick, he says, is to balance historical accuracy with the palate of the 21st century patron. This year's menu hasn't been finalized, but in the past they've served oysters, salmon cakes, corn, “lots of potatoes,” mutton, and in the winter, venison and seafood stew. The price includes a donation to support the Paoli Battlefield Historical Park.