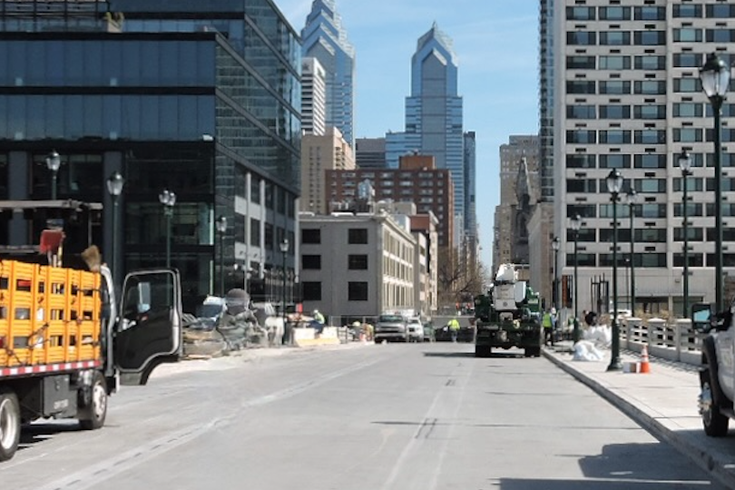 The Chestnut Street Bridge has been closed since August 2019 due to construction. It will reopen Saturday, March 19 with wider sidewalks and a parking-protected bike lane.

The bridge, which connects University City to Center City, will have wider sidewalks and a parking-protected bicycle lane.

With the bridge reopening, the parking-protected bike lane on Chestnut Street will extend from 45th Street to 22nd Street — except for a one block gap at 30th Street. It eventually will run as far west as 63rd Street.

Construction crews will begin removing a temporary access ramp connecting Chestnut Street to the parking lot at 2400 Chestnut St. on Friday night and finish up other tasks before reopening the bridge, PennDOT said.

The Chestnut Street Bridge closed in August 2019 to allow construction crews to repair its steel superstructure, install a new concrete deck and replace its lighting and railing. A section of the retaining wall underneath the bridge also had to be repaved, which shut down part of the Schuylkill River Trail for several months last year.

The stone arch bridges that carry Chestnut Street over the CSX Railroad tracks along the east bank of the Schuylkill River and 24th Street are still being renovated. Until improvements to the stone facade of those bridges are completed this summer, 24th Street will remain closed.

Some minor improvements to the Chestnut Street Bridge must still be finished. Its sidewalks and bicycle lane may be subject to short-term closures over the coming months.

The renovations are part of a nearly five-year, $105.1 million project to repair the bridge and seven nearby structures, including two viaducts on Schuylkill Avenue. The work, which began in August 2017, was financed entirely by federal and state funds.