Chris Christie: 'I didn't dump nachos' on Cubs heckler, though it 'was an option' 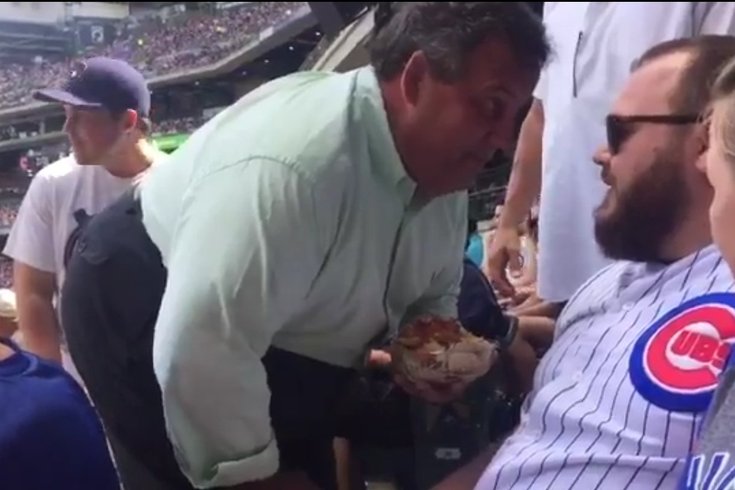 New Jersey Gov. Chris Christie publicly got into the face of one Chicago Cubs fan turned heckler during a recent game at Milwaukee's Miller Park, but things could have been worse.

Christie could have dumped his nachos on the guy, or so he said during an unrelated Wednesday press conference in Trenton, Politico reported, where he also called himself "restrained."

“For those of you who know me, I was very restrained,” Christie said. “I didn’t dump the nachos on him or anything, which I think was an option.”

The showdown happened during Sunday's Cubs game against the Milwaukee Brewers, when a man named Brad Joseph shouted "you suck" and called the governor a "hypocrite." Christie, with an order of nachos in hand, got in his face and called him "a big shot" – an exchange captured on video and shared widely online.

Chris Christie getting tough with a #Cubs fan 🙄 pic.twitter.com/WSQdqvOsgN

“When I’m at a baseball game with my son on a Sunday afternoon, I do have a right to sit there and enjoy the game,” he said at the press conference, according to Politico. “You get one shot to call me a name or curse me out. And I gave him that first shot to do that, but when you go at it a second time, you’re going to get a response.”

Joseph took to Facebook on Monday to break down what happened, calling Christie's behavior "aggressive" but said he did "regret" his own actions and apologized to the governor.

Christie sat down with CNN's Jake Tapper earlier this week and defended his behavior by saying that Joseph shouted some "really lousy, awful stuff."

The incident comes just a little over a week after Christie was booed for catching a foul ball at a Cardinals-Mets game and about a month after he was criticized for spending some private time on a public beach that he helped close as part of the state's government shutdown.

When asked if he'd stop attending baseball games following the viral exchange at Wednesday's news conference, Christie said that he would be "going to more."