Sports concussions eventually could be diagnosed via a sideline saliva test 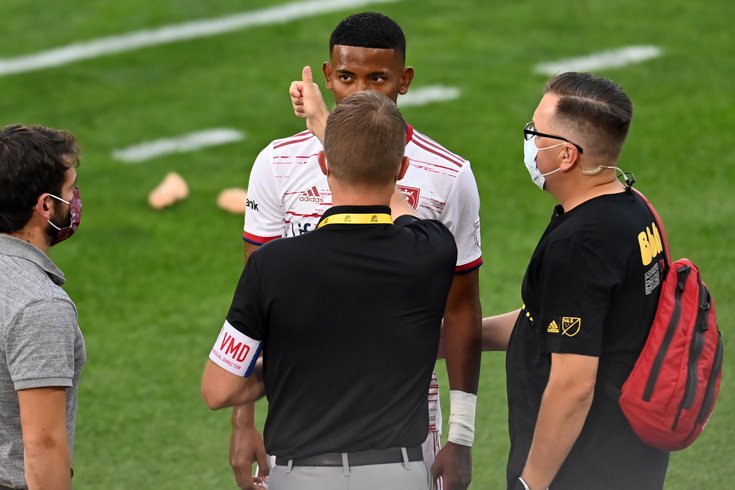 British researchers have developed a saliva test that could transform the way concussions are diagnosed. Above, Real Salt Lake forward Douglas Martinez is administered a concussion test on the sidelines in soccer game last year.

More than two million sports-related concussions occur in the United States each year. These head injuries can cause serious, long-term damage to the brain, but they can be challenging to diagnose.

A diagnostic test does not exist. Current protocols call for athletes to undergo a head injury assessment that involves a physical examination and an evaluation of any symptoms or behavioral changes. If a concussion is suspected, the athlete is not allowed to return to competition and must follow up with a doctor.

One of the biggest challenges in diagnosing sports-related concussions on the sidelines is that symptoms initially may be mild, leaving any brain injury undetected. Or a player may downplay symptoms to remain in a game.

Concussion experts have been searching for a more objective way to test for concussions for years, and now researchers from the University of Birmingham in the United Kingdom may have found a fast way to get an accurate diagnosis.

They designed a spit test that uses genetic markers in saliva to determine whether a concussion has occurred. It proved to be 94% accurate in a study involving male rugby players.

The researchers collected saliva samples from 156 Premiership and Championship players who had head injury assessments during the 2017-18 and 2018-19 seasons. Samples were collected before the seasons started and again when players were assessed for concussions or other injuries.

Certain genetic markers in the saliva indicate whether a concussion has occurred.

"What's exciting about this is we not only found a very accurate way of identifying brain trauma, but also we found it in saliva, which is not invasive," Belli told The Washington Post. "Everybody, including myself, has been looking at blood for many years. We've never really seen anything so exciting for mild traumatic brain injury."

This groundbreaking finding could have implications across sports with high concussion rates and among military personnel, who also have a greater risk for traumatic brain injuries.

The U.S. Centers for Disease Control and Prevention estimates that 5 to 10% of athletes experience a concussion during a sports season. However, many go unreported and undiagnosed, leading to delays in treatments and worsening symptoms.

Common concussion symptoms include headache, dizziness, nausea and vomiting, amnesia, brief loss of consciousness and difficulty concentrating. They can last for a few days or a few weeks. Athletes can't return to sport until they are symptom-free.

Getting the saliva test to the sidelines likely will be a years-long process.

The current test is laboratory-based and requires at least day for results to become available, but researchers are working to develop a form that would provide rapid results. An instant test could help confirm concussions and possibly detect others that otherwise would go undiagnosed. However, the test is not intended to replace a clinical assessment.

In the meantime, the researchers said the laboratory test could be used to test players after every game in search of concussions that went unreported, or to identify players who may be hiding symptoms.

The U.S. Food and Drug Administration would need to approve the test for it to be used in the United States.

Because the test was given to male athletes, its accuracy for female athletes is still unknown. Antonio Bell, the chief investigator of the study, told BBC Sports that women's symptoms are "more severe and more prolonged" so "to say this test would work in women would be wrong." Additional testing is necessary.

The study was published in the British Journal of Sports Medicine.