Dozens of potential cases are being investigated by health officials 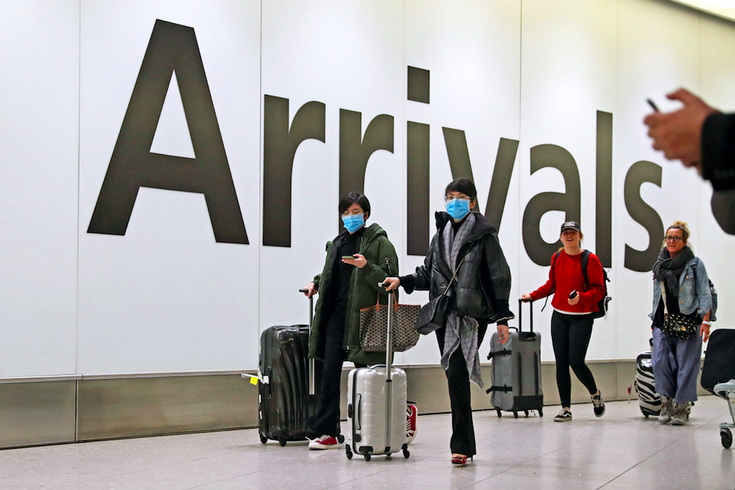 The U.S. Centers for Disease Control and Prevention say the risk of a coronavirus outbreak in the United States remains low, despite a second American case. Above, travelers wearing masks pass through London's Heathrow Airport.

A second U.S. resident has been diagnosed with the novel coronavirus after traveling to Wuhan, China, the U.S. Centers for Disease Control and Prevention confirmed on Friday.

The CDC is investigating at least 63 potential cases in 22 states, according to Dr. Nancy Messonnier, director of the National Center for Immunization and Respiratory Disease. Eleven cases have been confirmed as negative.

The CDC still considers the overall risk for Americans as low, Messonnier said. But she added that the situation is rapidly evolving. Investigators expect to identify more cases in the coming days and weeks.

Since originating in Wuhan, the coronavirus has spread to Thailand, South Korea, Japan, Singapore, Taiwan and the United States. As of Friday, at least 26 people had died of the coronavirus in China, where 13 cities have been placed on lockdown. China has confirmed 830 cases of the virus, according to Time.

Coronaviruses are a group of viruses that cause symptoms similar to the common cold. Most of the them only cause mild to moderate symptoms. But some of them, including severe acute respiratory syndrome (SARS), can cause severe illnesses.

The second American victim, a Chicago woman in her 60s, developed symptoms a few days after returning from Wuhan on Jan. 13, according to Dr. Allison Arwady, commissioner of the Chicago Department of Public Health.

The woman did not have any symptoms upon entering the country, Arwady said. But after experiencing symptoms, she alerted her doctor and has since been isolated in a hospital.

Health officials have been working with the patient to identify all possible close contacts she had during the two-week incubation period.

The woman has had limited contact and movement since returning from Wuhan, health officials said. She has not taken public transportation or attended any large events. Everyone in close contact with her remains healthy.

The American case involved a man from Washington.

Messonier acknowledged that health officials still have much to learn about the illness, but said officials have an "aggressive response" in place.

"Our goal is to always protect Americans," Messonier said. "We are working closely with all of our global partners. Information is coming in hour by hour, day by day."

More than 2,000 passengers have been screened for suspicion of coronavirus as of Thursday, according to Dr. Marty Cetron, director of the CDC's Division of Global Migration and Quarantine.

The CDC is asking people to err on the side of caution in regard to the virus.

Any returning travelers who have been in Wuhan within the past two weeks and develop a fever, cough or difficulty breathing should call their doctor immediately, officials said. They stressed that it is important to call ahead before going to the doctor or emergency room and to tell them about your symptoms and travel history.

Health providers are being asked to immediately alert infection control and their state and local health departments.

Respiratory and, in some cases, blood samples are being collected and sent to the CDC to confirm diagnosis. The test being used by the CDC will soon become available to state health departments too.

Wuhan has announced a complete travel ban on people entering or leaving the city due to the coronavirus outbreak. The CDC recommends anyone visiting China to practice good hygiene and avoid contact with anyone who is sick.

The CDC will begin providing regular updates about the coronavirus on its website next week. They can be found here.