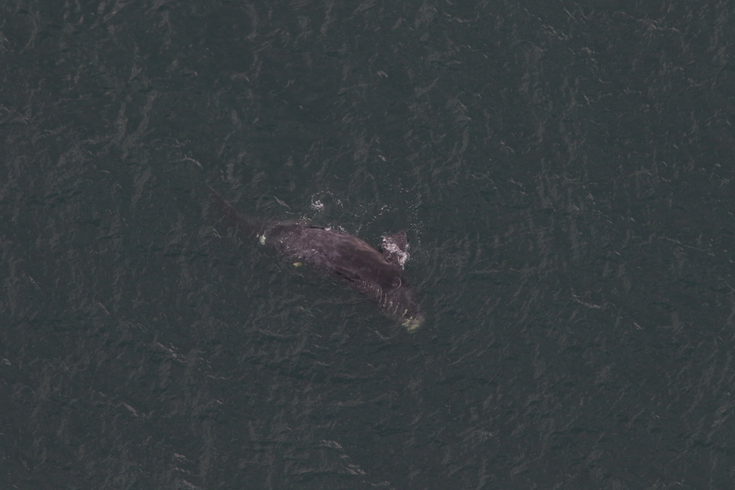 This North Atlantic right whale was discovered floating in the water near Elberon, New Jersey, on Thursday, the National Oceanic Atmospheric Administration said. The male calf was likely killed after being struck by a vessel, officials said.

An dead endangered whale that was found off the coast of Monmouth County likely was injured in two separate vessel collisions, wildlife officials said.

"Our hearts are broken by the news of the loss of this calf, which was the first calf observed this past season. The loss of every right whale is a detriment to this critically endangered species, but it is particularly hard when we lose a calf, given how few have been born in the last several years," Kim Damon-Randall, NOAA's deputy regional administrator for the Greater Atlantic Region, said.

Wildlife experts who performed a necropsy on the male calf said the marine mammals first collision with a boat likely took place several weeks ago. That resulted in the right whale suffering propeller wounds to its head and chest

A necropsy revealed the young whale was struck by the first boat several weeks ago. In that incident, wildlife experts believe the marine mammal suffered propeller wounds across its head and chest and skeg, or rudder, injuries to its back. Those injuries were healing NOAA said but may have impaired the whale.

The second collision with a boat proved fatal for the animal, and it resulted in propeller and skeg injuries to the right whale's tail.

Earlier this spring, the calf and its mother were seen being harassed by boaters off the coast of Florida in the Gulf of Mexico. Officials believe this could have contributed to its death. "This kind of exposure may have caused the calf to become accustomed to the presence of vessels," the NOAA said. Federal law requires that all vessels, including drones, stay at least 500 yards from whales.

The calf was first spotted with its mother off the coast of Georgia in mid-December 2019 and was last seen April 6 in North Carolina. It was the 15-year-old female's first calf. Her whereabouts are unknown.

There are only about 400 North Atlantic right whales remaining in the wild and less than 100 of them are breeding females. During the last three years, 31 whales have died and 10 whales were documented alive but with severe injuries in North America. The majority of deaths result from vessel strikes or entanglements in fishing gear.