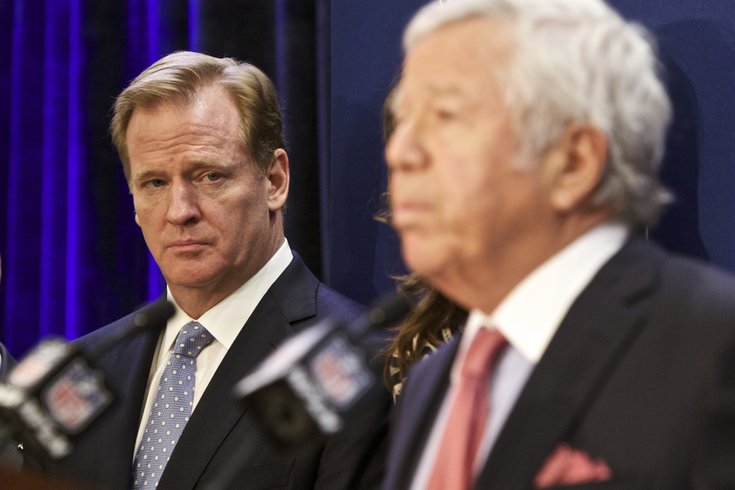 If they have not already done so, the owners of the 32 National Football League teams should be convening behind the scenes to remove commissioner Roger Goodell from power and put a person in that position who can at least pretend he has the respect of the players.

Unfortunately, the final act that should cause an end to Goodell’s tenure is not any of the very serious problems that have embarrassed the league over the past few seasons, but rather it is the truth-telling mouth of Seattle defensive back Richard Sherman.

And if that does lead to Goodell’s dismissal, Sherman should be applauded for stepping up, speaking the truth and stopping the NFL from falling into an even deeper pit of mistrust.

In the wake of this latest NFL mess, Deflate-gate, Sherman came forward and declared that he doesn’t expect the NFL to punish the Patriots because of the very close relationship Goodell has with team owner Robert Kraft.

Sherman left little to the imagination when he said he didn’t think the Patriots would be punished “as long as Robert Kraft and Roger Goodell are still taking pictures at their respective homes.

“You want to talk about conflict of interest. As long as that happens, it won’t affect them at all. Nothing will stop them.”

And Goodell can’t do a thing about it. He can’t do anything because he has made so many blunders over the past year that it is open season for criticism, and he cannot defend his position, or the position of the NFL on so many subjects.

If you want to add irony to the situation consider that a day after Sherman’s rant, it was Kraft – the owner of the Patriots, who stated Monday night that the NFL would owe his team an apology if it could not provide any proof that New England tampered with footballs before its lopsided victory over the Indianapolis Colts in the AFC Championship Game.

That is getting it from both sides of the equation, and that should be pretty good proof to the NFL owners that Goodell can no longer be the face of the league’s front office.

Consider that a player called out the credibility of the NFL and there is no question that he will play in the game, while teammate Marshawn Lynch would have been banned from a playoff game if he'd not replaced his gold warmup cleats.

In the short term – the very short term -- this might work because the National Football League has officially overtaken first place in American industry standings as the leader in the Too-Big-To-Fail department.

Despite leadership that has proven to be boorish, incompetent and downright dopey, the NFL will head into this weekend with a very real chance to put on a Super Bowl of monumental proportions.

After a season marred by the Ray Rice saga and the ensuing embarrassing investigation concerning domestic abuse, and despite some horrific officiating calls in critical playoff moments, and this latest installment of the Patriots' ongoing novel of Around The Rules in 16 Weeks or More, the NFL comes out on top of a pile of cash.

The end result of all of this is a Super Bowl that has everything the world of wrestling can only dream of producing. The match up between the New England Patriots and Seattle Seahawks has villains, cheaters, whiners, complainers, good guys, bad guys and a whole heckuva lot of pure talent.

It could be the most viewed sporting event in United States history, and there is plenty to anticipate with Patriots coach Bill Belichick in his darkest role as Coach Hoody, Tom Brady trying to prove he is not the bad guy who deflated footballs and the Seahawks trying to stop the evil, cheating empire from winning another trophy.

But in the end, when this game is over, the story with the bigger long-term impact will not be who won the Super Bowl, but who lost all credibility. The biggest loser will be Goodell. And if the owners don’t do something about it real quick, they will also be dragged down the same credibility drain.