A new number to watch with diabetes: your zip code 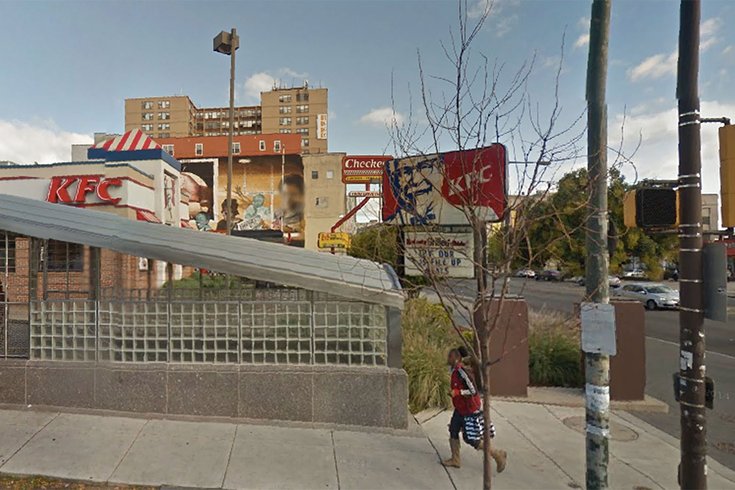 Research suggests you are more likely to get diabetes if you live in areas of Philadelphia that lack supermarkets or farmers markets with healthy food options. Without accessible grocery stores, many residents rely on fast food.

Within Philadelphia's diverse patchwork of neighborhoods, it turns out that where you live matters when it comes to your health.

Outside of individual risk factors like smoking and obesity, researchers have found that attributes tied to your community are also linked to your likelihood of disease.

An estimated 12 percent of diabetes risk in a given ZIP code was associated with its neighborhood characteristics, such as healthy food access, nearby exercise facilities, and safety level, new studies show. Living in an area with less of these perks translated to a more than 50 percent higher risk of diabetes than residing in a neighborhood with more privileges.

“Neighborhood can have a big effect: where you shop, where you walk, where you eat, where you buy food,” said Tina Phipps, the director of Einstein Healthcare Network's Center for Urban Health Policy and Research, who was not involved in the research. “It can also influence how positive you feel about yourself and your surroundings, that can affect your mood and stress level.”

Diabetes, already a major public health issue, remains on the rise in Philadelphia. Compared to the other four major cities in the United States — New York, Los Angeles, Chicago and Houston — Philadelphia now has the highest prevalence of the disease. Looking into factors that could contribute to why so many residents develop the disease is a first step toward prevention.

More than 8,000 Philadelphians were chosen randomly to participate in a public health phone survey during two periods, 2002-2004 and 2008-2010. Individuals from 46 ZIP codes were asked about their demographic information, health status and lifestyle — things like race, education level, smoking and physical activity.

Each ZIP code was also given a score based on how residents rated their access to fruits and vegetables, quality of nearby groceries, degree of trust in neighbors and poverty level. Economically worse-off neighborhoods had more people suffering from diabetes than better neighborhoods. In addition, the neighborhood score had a significant impact on the odds of having the disease, even after adjusting for individual risk factors like race, gender, smoking and body mass index. 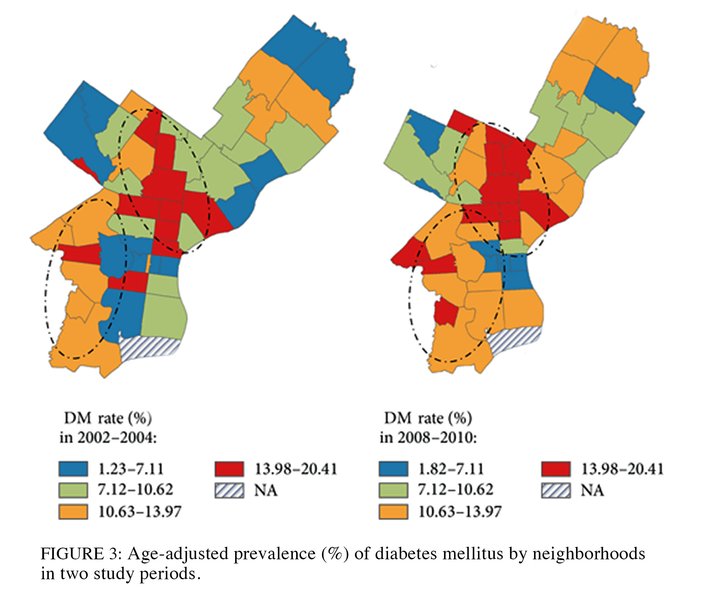 “In the same way that we talk about people who are sick, we also have communities that are unhealthy,” said study author Ana Núñez, associate dean for Urban Health Equity, Education and Research at Drexel University. The research was published online in the journal Advances in Preventative Medicine in November.

For instance, certain areas of the city lack supermarkets or farmers markets with healthy food options. Residents are forced to either take two buses to a decent grocery store or dine on offerings from the local fast food joint. Or the ever-looming threat of crime can serve as a barrier to outdoor physical activity, such as playing at the nearby park for kids or brisk evening walks.

The number of ZIP codes with a high rate of diabetes ( greater than 10 percent) increased from 21 to 29, out of a total of 46. These were mostly concentrated in the North, West and Southwest regions of the city.

“Increased access to healthy foods from farmers' markets, corner store initiatives, the planting of trees in neighborhoods, the painting of murals, walking groups — there's all sorts of things happening in the city that are trying to improve the quality of life in neighborhoods challenged by these issues.” -- Tina Phipps, director, Einstein Healthcare Network's Center for Urban Health Policy and Research

“If your doctor says the holiday weight is too much, and you live in Roxborough or Mt. Airy, you say 'I'll bundle up and go for a walk,' but that's not true for everybody in the city,” Núñez said. “In some of our neighborhoods in Philadelphia, if you a hear a bang, it's not a truck backfiring — it's gunfire.”

Living with such chronic stress is another big health issue, and is something that may contribute to heart disease, obesity, depression and gastrointestinal problems.

“Living under higher stress conditions increases the body's activation of the fight-or-flight pathway, which releases internal hormones that potentially put you at greater risk of diabetes,” said University of Pennsylvania physician Judith Long, who was also not involved in the study. Her own research focuses on socioeconomic and racial disparities in health.

Overall, she views the study's results as unsurprising and consistent with her own findings. In 2010, Long performed a study on black veterans with diabetes living in Philadelphia, attempting to see if certain aspects of a neighborhood could be linked to the patients taking better care of themselves.

“We did our own study showing that neighborhood was associated with glucose control,” Long said. “Even in poor neighborhoods and communities in which you might not have as much services, if people come together to help each other, patients were more likely to have better glucose control.”

Long and her colleagues used phone survey data as well, but focused on whether communities had come together in the past to work on projects or improve the neighborhood.

“There was a low-income neighborhood in Philadelphia where a new McDonald's was proposed, and the neighborhood organizations came together to block it,” she said. “Maybe that's how they could help diabetes risk — say, putting in a grocery store instead of a McDonald's.”

“The reality of it is, the one thing that privilege affords you is the luxury of being completely oblivious. Let's invest money to make our communities healthier, even if we don't live there.” -- study author Ana Núñez

Such findings emphasize the importance of feeling empowered as a community to improve the immediate environment. Indeed, there are efforts throughout the city that attempt to reduce wide neighborhood disparities in health.

“Increased access to healthy foods from farmers' markets, corner store initiatives, the planting of trees in neighborhoods, the painting of murals, walking groups — there's all sorts of things happening in the city that are trying to improve the quality of life in neighborhoods challenged by these issues,” Phipps said.

For instance, some local organizations are working to lower the impact of food deserts, or communities that lack access to fresh and affordable nourishment. For instance, Philadelphia nonprofit The Food Trust works with more than 650 corner stores to provide healthier options, sets up farmers' markets across the city, and educates kids from local school districts on nutrition.

“It's not just about building in communities that don't have grocery stores or inserting healthy food in corner stores — it's the comprehensive approach of targeting all of those things in an area,” said Annie Leary, interim manager of the Healthy Corner Store Initiative. “We have to approach it from all angles in order to make a big difference.”

Such initiatives can start to change the culture of underprivileged communities where health is not the top priority. As an example, a researcher from Penn State University surveyed residents of a Philadelphia food desert after the opening of a new supermarket, finding that there was no change in the amount of fruit/vegetable intake or obesity. Many families aren't used to cooking or buying healthy meals, since processed and fast food is often viewed as cheaper and easier.

To help address this issue, a new partnership between food service company Aramark and the Children's Hospital of Philadelphia called Home Plate aims to educate 60 low-income families about meal planning and healthy cooking. The program, launching this spring, will track the nutritional value of meals eaten, as well as the heights and weights of family members.

As for those corners of the city that have ample access to Whole Foods and a 24-hour gym — too often, the problems of other communities are out-of-sight, out-of-mind.

“The reality of it is, the one thing that privilege affords you is the luxury of being completely oblivious,” Nunez said. “Let's invest money to make our communities healthier, even if we don't live there.”