There are goodies from McDonald's, Wendy's, Burger King, Panera and KFC that I hope to eat again 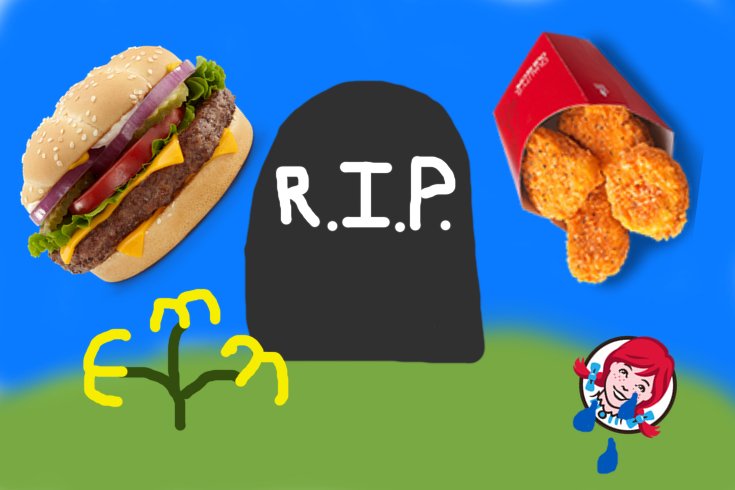 Illustration by Daniel Craig/Images via McDonald's and Wendy's

The Angus Burger from McDonald's and the Spicy Chicken Nuggets from Wendy's were both gone too soon.

One of the most fascinating things about fast food is the seemingly strained desire to innovate in uncharacteristic and sometimes outlandish ways.

Over the years, the industry trend has been for competitors to try to draw new customers and dip into each others' business with new menu items, which are occasionally beyond the pale.

Many of these items, of course, don't survive, as fast food joints cycle out experimental and seasonal dishes while the main menu stays mostly intact, save for the occasional sandwich or side that get becomes a permanent fixture. This process leaves many — sometimes beloved — menu items by the wayside.

Initially, when I started this list, I wanted to include as many popular and recent discontinued fast food items as possible, and leave it up to you to decide which ones should come back. However, that ignores the universal truth about fast food:  It’s not about you or caring what you think. Instead, it's about me and my personal gratification.

So, here are the discontinued items that I think need to be brought back to menus. And remember: I, the customer, am always right.

These are still available in select U.S. cities, but are unavailable at most locations, including here in Philly. When Wendy's took them off the menu last year, many customers were justifiably irate. The best part about the spicy nuggets, in addition to having the perfect amount of spice, was that you didn't need to dip them in a sauce to enjoy them, as the breading provided enough kick on its own.

When fast food chains decide to go big with their burgers, they tend to go overboard, throwing everything but the kitchen sink onto a giant patty. What's often overlooked is whether the burger is actually any good, and the Angus Burger, with its 1/3 pound of beef, was actually pretty solid, particularly the bacon and cheese burger.

It wasn't too much, but it was definitely more filling than an average McDonald's burger. They were axed in 2013. Luckily, the best fast food burger of all time is still on the menu.

Some of Burger King's more EXTREME approaches to breakfast were, frankly, embarrassing. The chain's partnership with Pillsbury in the late 1990s, however, was brilliant. The Cini-minis were a perfect portion for the appearance of a light breakfast — four mini cinnamon rolls — but had all the shameless indulgence of a fast food breakfast, complete with addictive icing dipping sauce.

Of course, I could always just make Pillsbury cinnamon rolls at home, but that would sort of defeat the purpose.

I don't go to Panera that often, save when I have a gift card, but every time I do, I can't even begin to describe the disappointment when I look at the sandwich offerings. As indicated by social media, the Chipotle Chicken Panini was wildly popular, but was phased out first as a seasonal option, then gone altogether. The love for this panini is so strong that someone actually bought a domain name to call for its return. The website, accurately, points out that Panera's attempt to replace the sandwich with an avocado variation, to put it bluntly, stinks.

The KFC snackers were originally a half-hearted attempt at reviving the Chicken Littles, the aptly named mini chicken sandwiches, from 20 years ago. In 2012, KFC officially went back to the Chicken Little name, and switched up the ingredients a bit, swapping lettuce for pickles. The switch, however, left the buffalo version of the sandwich in the dust. Just an awful decision. Chicken tenders are always better slathered in buffalo sauce, and KFC had found a perfect balance between bun, tender and sauce.

I know I initially said I don't care about your opinion, but I promise you, I do. If there's a discontinued fast food item you wish would return, let me know: daniel@phillyvoice.com. A separate list might be put together if I get enough submissions.