Renderings depict 6 of the 10 galleries included in Disney100, which examines the history of the entertainment giant 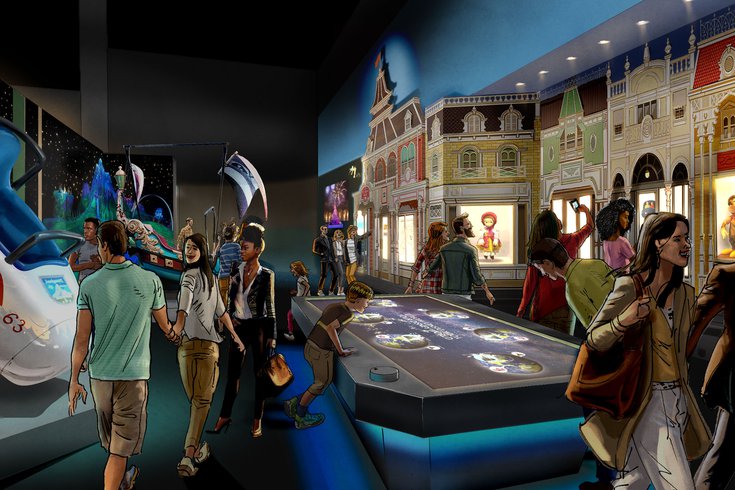 Disney100: The Exhibition opens at the Franklin Institute in Philadelphia on Feb. 18. It includes 10 galleries and more than 250 items from the Walt Disney Archives, including original artwork, artifacts, costumes, props and other memorabilia.

The highly-anticipated Disney exhibit coming to the Franklin Institute next year will include 10 galleries and more than 250 "crown jewels" from the Walt Disney Archives – rarely seen original artwork, artifacts, costumes, props and other memorabilia.

Tickets are now on sale for Disney100: The Exhibition, which will begins its world tour in Philadelphia on Feb. 18. The exhibit will continue through Aug. 27. Many evening time slots in February and March have sold out.

MORE: Children can ride life-size dinosaurs and dig for fossils at Jurassic Quest

The 15,000-square-foot exhibit is the result of a collaboration between Walt Disney Archives and Semmel Exhibitions, which also produced the Marvel: Universe of Super Heroes exhibit that visited The Franklin Institute in 2019.

Disney100, the first major event to mark the celebration of Disney's 100 years, was announced in September at D23 Expo: The Ultimate Disney Fan Event.

Each of the exhibit's galleries will have a different theme, allowing guests to travel through 100 years of magic. The exhibition will cover the classics, like "Snow White and the Seven Dwarfs," all the way up to Disney's latest involvement with Pixar, Star Wars, Marvel and National Geographic.

After premiering at the Franklin Institute, the exhibition will continue its North American tour in Chicago and Kansas City. The international leg of the tour will commence April 18 in Munich, Germany.

"The Franklin Institute has spent almost 200 years bringing stories of innovation and discovery to the public in an immersive and interactive way, so Disney100: The Exhibition is a perfect fit for us and our audience," Franklin Institute CEO Larry Dubinski said. "We are proud to host the world premiere at The Franklin Institute so fans across Philadelphia and beyond can have the first opportunity to see these crown jewels come to life in beautifully crafted galleries reflecting Disney's imaginative storytelling, innovation, discovery and wonder."

Last week, exhibitors shared a first look at six of the 10 galleries:

Where It All Began 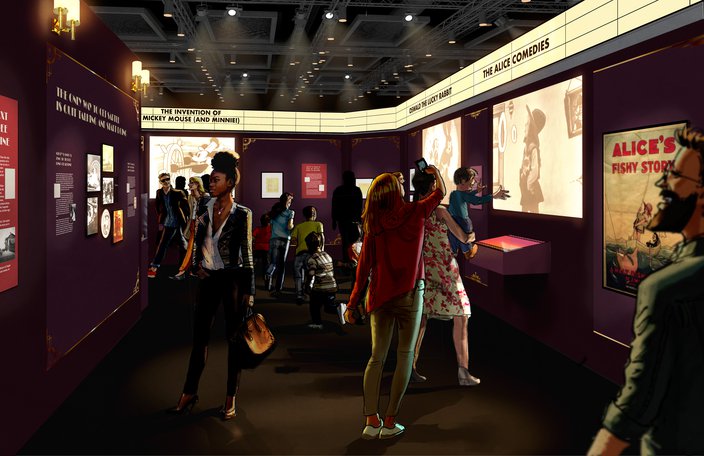 Guests will be introduced to visionary filmmaker and innovator Walt Disney and his philosophies that laid the foundation for the Walt Disney Company. They can learn about his life before Mickey Mouse, Mickey's 1928 debut in "Steamboat Willie" and the animation breakthroughs of the early 1930s.

Where Do the Stories Come From? 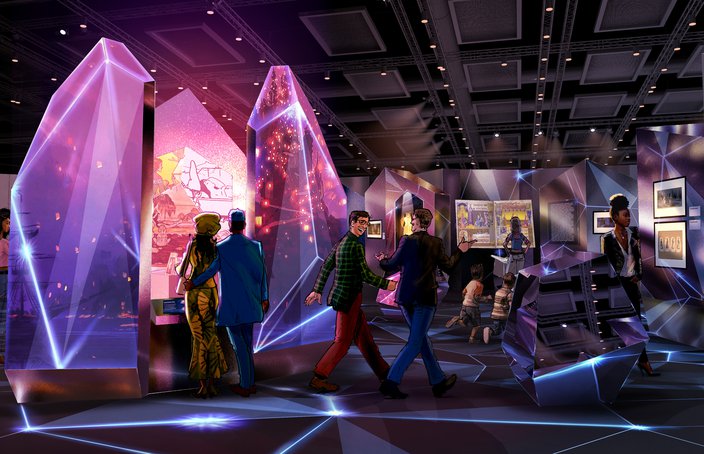 This gallery is dedicated to the art of storytelling with ever-changing multimedia environments. Visitors can learn how Disney storytellers bring characters to life through art and artifacts from films like "Snow White and the Seven Dwarfs," "Frozen" and "The Princess and the Frog." 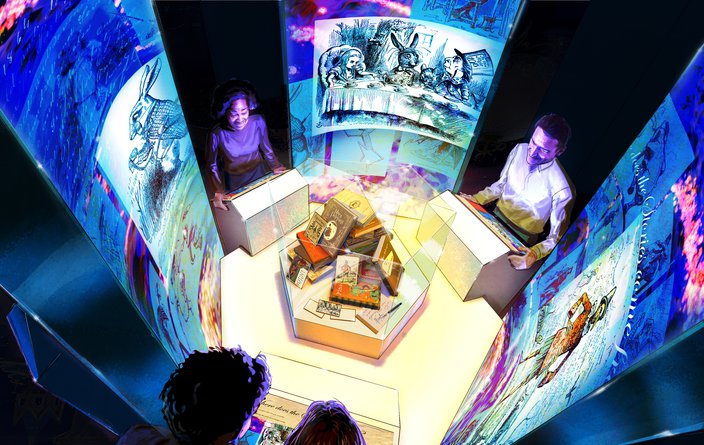 A rendering of the Sources of Inspiration gallery

The Spirit of Adventure and Discovery 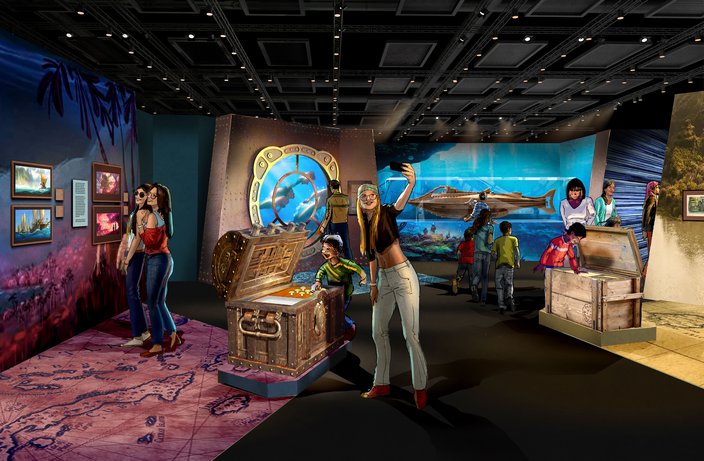 In this interactive gallery, guests can embark on a quest through mysterious jungles and ocean depths to uncover hidden artifacts from Disney, Marvel Cinematic Universe and Star Wars adventure stories. 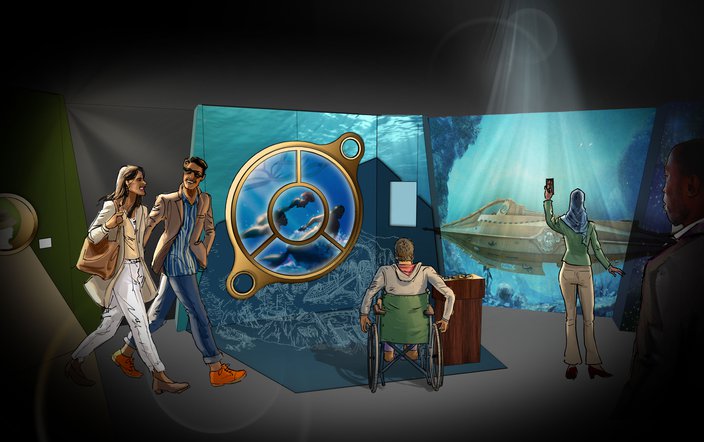 Visitors can look through an interactive window of Captain Nemo's legendary submarine, as seen in "20,000 Leagues Under the Sea," to catch a glimpse of Disney and Pixar's underwater worlds.

Your Disney World: A Day in the Parks 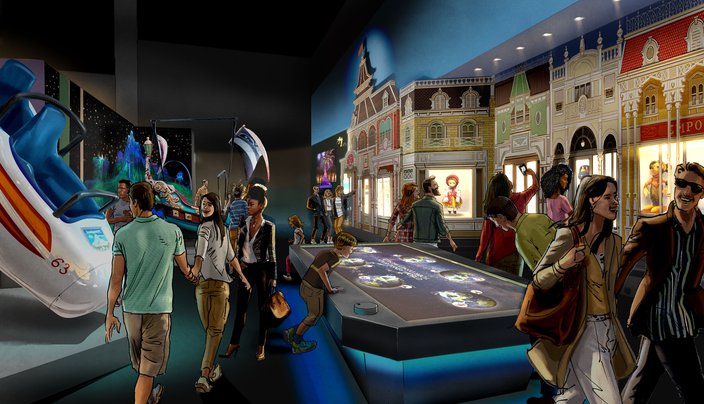 This gallery uses a recreation of Main Street, U.S.A. to explore the development and legacy of worldwide Disney parks and attractions.

The rare artifacts on display include a Disneyland employee badge from 1955, a 1937 prop storybook featured in "Snow White and the Seven Dwarfs"and a Skywalker Lightsaber Hilt from "Star Wars: The Rise of Skywalker" that Daisy Ridley used as Rey. 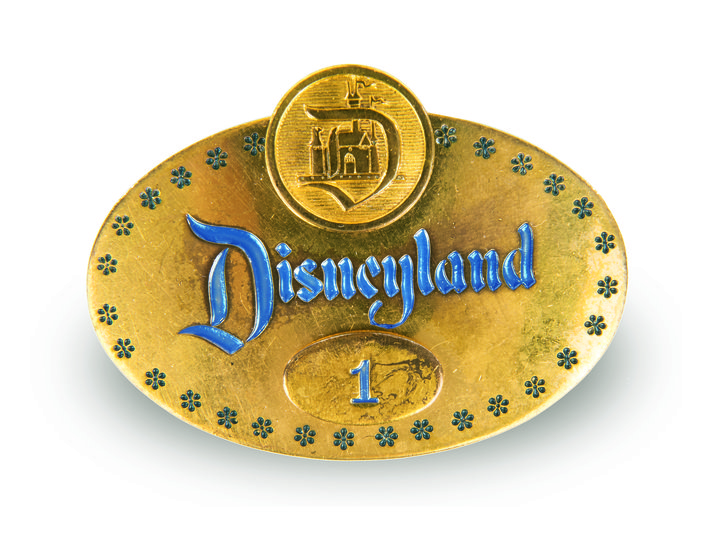 Composer Steve Mazzaro, whose work can be heard on soundtracks to the 2019 version of "The Lion King" and "Pirates of the Caribbean: Dead Men Tell No Tales," has created an original soundtrack for the exhibit. The music blends themes of beloved classics like "When You Wish Upon A Star" from "Pinocchio" and "Let it Go" from "Frozen" with a new theme crafted exclusively for the exhibition.

The exhibit will be open daily from 9:30 a.m. to 5 p.m. Daytime tickets, which include admission to the entire museum, cost $45 for adults, $43 for seniors and military members, and $41 for children ages 3 to 11. Evening tickets, which only include admission to Disney100, are available Thursdays through Saturdays, 5 p.m. to close, for $25. Tickets are timed and dated, and advance ticket purchase is strongly recommended.