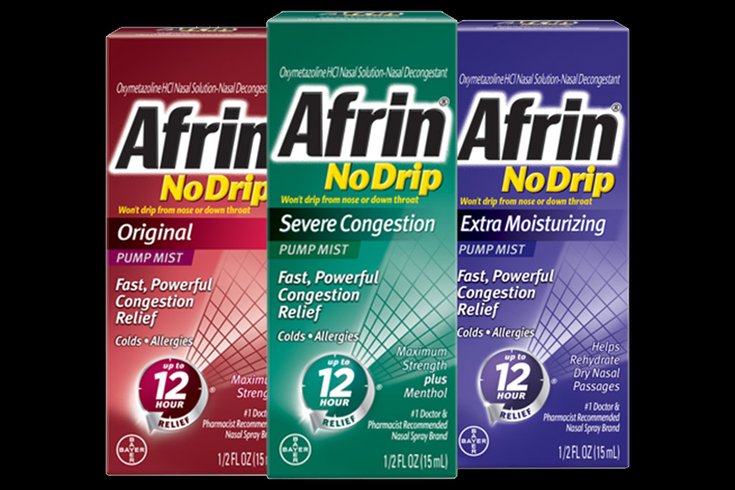 Decongestant nasal sprays such as Afrin (oxymetazoline) can be habit-forming. Most doctors suggest limiting their use to no more than two days.

It’s been an uncommonly nasty winter, especially after the comparatively mild last couple of years, and at any given time it seems like every other person is trying to get over a cold.

With spring still way too far away, sufferers of colds and other similar sicknesses are often turning to Afrin, Dristan and other over-the-counter nasal sprays in order to get some relief.

These sprays can provide an impressive amount of short-term relief. But they can also be habit-forming, and rapidly lose effectiveness after a couple of days, experts say.

So is it wise to use Afrin and other nasal sprays? We asked several top ear-nose-and-throat doctors in the Philadelphia area what potential users should know about these products. Their consensus? If you’re going to use nasal spray, toss it after two days.

“Traditional decongestant nasal sprays such as oxymetazoline (Afrin) can be habit-forming although not addictive in the same sense as opioids,” said Dr. Robert Sataloff, an ENT physician who is also professor and chairman, Department of Otolaryngology-Head and Neck Surgery and senior associate dean for Clinical Academic Specialties at the Drexel University College of Medicine.

“When such nasal sprays are used chronically, they damaged the linings of the nose resulting in a condition called "rhinitis medicamentosa." This damages nasal function and causes symptoms of chronic congestion that often lead to continued misuse of the nasal spray, and overdosing, such as using the sprays much more frequently than appropriate.”

Sataloff added that steroid-based nasal sprays such as Flonase and Nasonex are "generally not habit-forming.”

Dr. John Bosso, director of the Otorhinolaryngology Allergy Clinic at Penn Medicine, also drew a distinction between the two types of sprays.

Decongestants like Afrin and Dristan, he said, should be used for short-term periods, such as during a cold.

“They work very well and rapidly,” Bosso said, “but after 3 or 4 days of consecutive uses, people start getting a rebound effect.” That means that users often start getting more congestion once they stop using the spray – and the longer they use it, the more it causes the medicine to work for a shorter period of time. That, he said, is “where the addiction can come in.”

Dr. Seth Zwillenberg, the chairman of Einstein's Division of Otolaryngology and also an associate professor at Drexel, described Afrin and other sprays like it as “a very effective, very good, short-term solution to the problem. The big issue is, it becomes habitual. It’s very bad to use for more than 1 or 2 days.”

So is it worth it? Zwillenberg says it almost always isn’t.

“We discourage the use of Afrin because people get seduced,” he said. “We make sure that if we tell anyone to use it, we warn them, just like with narcotics. Two days, but throw the bottle out.”

What happens when a patient says they’re stuck in the Afrin habit, as happens a few times a month? He usually puts them on a nasal steroid.

What drives people to nasal spray dependency, beyond just colds?

Allison Calcaterra fell into the habit after she moved away from California and it made her allergies considerably worse. She used Afrin and generic versions of it, and noticed that the label advised not to use it for more than two or three days.

“Usually stuff like that you can kind of ignore,” she said. “This [warning] is true.”

“Your nose does become addicted to it,” she said. She got off of it for a long time, she said, but fell back in when she got sick for several weeks during the holidays last year. She also remembered that her grandmother had heavily used the stuff as well.

Actress Kaley Cuoco, from the CBS show "The Big Bang Theory," admitted in 2015 that she was once addicted to Afrin and other nasal sprays “for years,” to the point that she required surgery on her sinuses – which led to false rumors that she’d undergone a nose job.

So what should people do with their colds, in this coldest of cold winters?

“Wait it out,” Zwillenberg said. “Do what your grandmother would have told you – bundle up and wait it out. Don’t take antibiotics and don’t start using Afrin.”