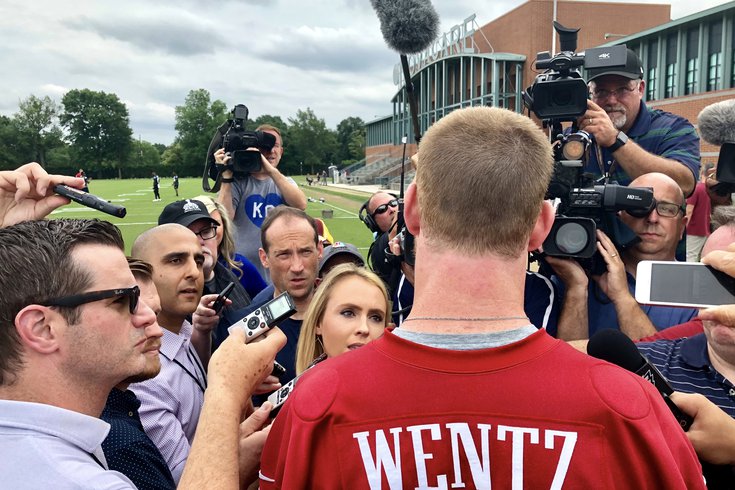 Training camp is going to look quite different in 2020 than it has in the past.

Philadelphia Eagles head coach Doug Pederson took to the podium for his final press conference before Saturday's scheduled off day, which coincides nicely with Brian Dawkins' induction into the Pro Football Hall of Fame, and there was no doubt what the first question was going to be about: Carson Wentz's noticeable absence on Friday.

In fact, the majority of the questions posed by the media following practice had to with the Eagles quarterback.

And after Wentz was fully involved early on in camp, we've seen his participation be steadily scaled back over the course of the week. In case you've been living under a rock — or, more likely this time of year, you've been on vacation — here's a great timeline of his practice schedule from Jimmy Kempski's Friday practice observations:

So what specifically did Pederson have to say after practice? Funny you should ask, because it was actually quite a bit — especially considering Wentz didn't even practice (and hasn't really seen a change in his workload since the level of physicality at camp was ramped up earlier in the week). But, naturally, Wentz is franchise quarterback, and when a player of that importance is recovering from a serious injury, everything he does — and everything he does not — is going to be put under scrutiny.

It also doesn't help that Pederson is playing Wentz's recovery extremely close to the vest, which is to be expected.

With the team now off until Sunday night's open practice, let's break down some of his answers from Friday's press conference:

PEDERSON: Well, that's not controlled. The situation is controlled, but the actions are not at the snap. It's still part of the plan and I’m not going to subject him to that right now.

Again, this jives with what Pederson said earlier in the week about trying to keep Wentz out of harm's way when at all possible. Eventually, they're going to have to let him take some hits, but it's looking like that won't come until the games actually count.

And, as we'll see in a minute, that decision is going to be made by a committee of people from Wentz all the way up to Howie Roseman.

Q. To follow-up on Carson, is he going to do team drills before he's cleared, or at this point does he have to wait until he’s cleared for contact?

PEDERSON: You're talking about full contact? When I get to that bridge, I'll make a decision. Right now, we are where we are with him.

I’m not going to subject him to any more. What I saw last week, a week ago is good enough right now at this time. Now, whenever that day comes, we'll cross that bridge when that day comes.

Q. But going forward here, we should expect to see what we've seen until he’s cleared?

PEDERSON: From a medical standpoint, yes.

In other words, the reporter is asking if we'll see Wentz in 11-on-11 drills, now that the pads are on and there's some actual hitting, before he's cleared for full-contact. The question makes sense, since the quarterbacks are hands-off anyway and, at least in theory, he shouldn't be in any real danger. But Pederson's answer also makes total sense: Why risk Wentz banging knees with someone or getting rolled up on by an offensive lineman if you don't need to. [Note: He gets asked a very similar question later.]

Again, Pederson reiterated what he said earlier in the week: he's seen enough from his quarterback already this summer. And after seeing just a glimpse of that over the first few days of camp, it's hard to argue with the thought process here.

Q. So, this was all part of the training. He did not suffer any sort of swelling?

PEDERSON: No setbacks. Not at all. Nothing.

Q. Usually in a rehab, you ramp up and there’s steady progression. Well, he got to a certain point and now he’s going backwards in terms of what he’s actually doing.

PEDERSON: What you see out here is considered backwards. What we see in the building and what he does with our strength and conditioning staff is still progressive. It doesn't have to be every snap, every football situation for him to go forward. You know what I mean? What you see out here is only one small sort of tidbit of what he's doing collectively inside this building too.

This is the best answer Doug gave all day and a good reminder that when it comes to Wentz's knee, we're looking at an iceberg from above the water, while the Eagles are seeing the other 95 percent under the surface. Go look it up.

Q. Is this a question of putting him in team drills and there was traffic around him and we just don't need that, and that’s why the team portion … ?

PEDERSON: That's part of it. That's what we saw last week. We were out here for a couple days when he was there, and right now is not the time to risk that. Again, it's all part of our plan, part of his progression, and he's doing an outstanding job.

Q. At what point do you have to worry about rust with him? Because if he is going to play Week 1, I would imagine you want to see him with the team in drills more.

PEDERSON: Listen, you saw how at the end of the year, [QB] Nick Foles, he missed all of camp, regular season, played extremely well. Took some time, but played extremely well. Carson's out here working his tail off every single day. He's throwing individual routes. There is going to come a time when we game plan, and we're game-plan specific and he gets a chance to be in there. Then we work. But right now, seven-on-seven and the things that we're doing with the starters and Carson and all that is preparing him for that day we cross that bridge.

This is the other part that Pederson was talking about when saying that he's already seen enough out of Wentz to feel comfortable reigning him back in. There was little-to-no rust on Wentz this summer, and we wrote as much earlier in the week when we said, "Not only has Wentz looked healthier than expected, but he doesn't look like he was ever injured in the first place, save for the black brace on his surgically-repaired left knee."

A day later, Pederson said the same thing about his quarterback, and I'm willing to bet that he wasn't just talking about Wentz's physical health either.

Q. Carson's obviously a pro's pro, but how much disappointment, if, any do you sense from him that he's not full team drills, 11-on-11s at this point?

PEDERSON: I mean, listen. He's an athlete. He started what, 13 games for us last year. I'm sure he feels a little disappointed, but listen, that’s part of the plan. I remember when I hurt my back in 2004. It sucks. You're not out there with your team. I get it. I understand. I've been through it. I know what he's going through. But he's working every single day to get himself back on the field.

Translation: We're just lucky we don't have to chain Carson to the goalpost to prevent him from running out into the huddle.

Honestly, I'm surprised Wentz hasn't tried switching jersey's with Sudfeld to try to get a few reps in full 11-on-11s.

Q. It's a new training staff, a new medical staff. Who’s putting this plan together for Carson? Is it you?

PEDERSON: It's collaborative. Doctors, trainers, [Eagles Executive Vice President of Football Operations] Howie [Roseman], myself, Carson. The doctors – it's in their hands.

Q. Do you reevaluate the plan every day?

PEDERSON: Point X will be Point X. I'm not getting into that.

As he was walking away, Pederson turned to Zach Berman, who asked that last question, and said, "You didn't think you were going to get that one by me, did you?"

"I had to try," Berman answered.

And we'll keep trying until Doug reveals his plan, or until Carson takes his first hit.