The Maxwell Club's Pa. Player of the Year leaves for Kansas State on Thursday 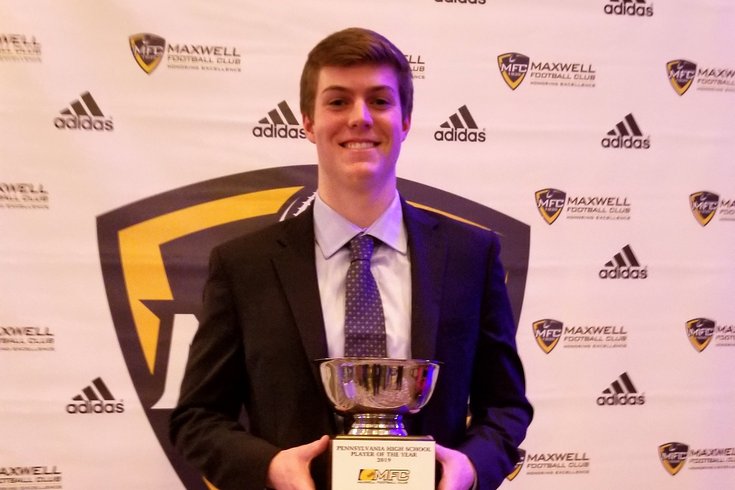 Will Howard will be playing on Saturdays next year.

Maureen Howard made a subconscious mistake in buying plane tickets for the return flight home from Manhattan, Kansas, this weekend. She instinctively ordered six instead of five.

Mothers are allowed to do that, especially when it’s so tough to let go this early.

Her oldest, Will, is a highly sought 6-foot-4½, 225-pound high school quarterback at Downingtown West with great grades, a cannon for an arm and maturity beyond his years. And he’s about to make a move Thursday that is becoming commonplace among elite high school football players across the country — mid-year college enrollment.

Will, the Maxwell Club Pennsylvania Player of the Year, signed with Kansas State. His family is flying down with him January 16 — and Will won’t be coming back home to Downingtown until late spring for his prom.

Mid-year enrollment is when high school student/athletes graduate a semester early, allowing them to enroll in college for the spring semester. This enables them to acclimate to college life and the demands of a Division I program earlier, so by midway through their freshman year they know the system and have an advantage over the other incoming freshmen arriving during the summer. Mid-year enrollment became popular and was somewhat rare in the early 2000s.

If anyone is equipped to do this, it’s Howard. He possesses all of the components, carrying a weighted 4.34 GPA and a 1,380 score on the SAT. He was the leader of the Whippets’ best season ever, and displayed great character in standing up to questions after throwing two interceptions in the state semifinal loss to Central Dauphin.

“Coming out of this recruiting process, I admittedly didn’t know much going into it,” said Howard, who threw for 2,543 yards and 27 touchdowns this past season in leading the Whippets to their first District 1 6A championship in school history, and first since 1996 before Downingtown split and a school-record 13 wins.

“I’d let to help as many guys as I can, and the best advice I can give is to make sure you’re 100-percent certain that you want to do it. For quarterbacks, it’s a big move. It is a case-by-case basis, but you have to feel that you’re ready, and if you are, go for it. If there are any doubts, don’t do it and enjoy the rest of your senior year.

“For me, I felt that I was ready. I knew this was the right decision for me and one of my goals is to play college football as early as possible at K-State. They have a senior quarterback (Skylar Thompson) there now, and hopefully back him up next year and win the job my sophomore year. I want to be prepared. That’s what is motivating me.”

Kansas State head coach Chris Klieman and quarterbacks coach Collin Klein did tell Howard the mid-year move is challenging. They stressed to Howard to stay home if there is an inkling of doubt even up to the morning he’s scheduled to board the plane.

The old-school dictum says “let a kid be a kid and enjoy his senior year.” Howard took those thoughts into consideration, considering that he was closing in on 1,000 points in basketball, which he’s chosen to play while still at Downingtown West when he could have easily bypassed the season considering the risk of injury involved.

“There are a lot of sacrifices involved,” said Howard, who will be joined by 10 other mid-year high school seniors at Kansas State. “I’m leaving a lot of friends I grew up with my whole life behind, and instead of leaving for college in August, I’m leaving now in January. I had to take a good load of class work over the summer to get the required credits, and I was cramming in a lot of work over the Christmas break.

“But if you want to do something bad enough, and you’re committed, like I am to this, it’s worth it. The Kansas State coaches told me that they want me to do what is best for me. Georgia wanted me to come a whole year early.”

The first college coach that suggested mid-year enrollment to the Howards was Shawn Watson when he was at Pitt. (He was since fired and joined Kirby Smart’s staff in Georgia as offensive quality control coach). Watson sat down Howard and his father, Bob, and walked them through the process. The subject would be broached in a series of casual conversations between Howard and his father. It started to progress as the college visits increased.

One of the biggest challenges Howard will face is going from being king of his current world at Downingtown West, to starting over again on the bottom at Kansas State without the benefit of the summer buffer.

Another test will be time management, between school, football and finding the time to do the mundane things like washing clothes.

“Kansas State provides a lot, and I’m as ready as I’ll ever be for those challenges,” Howard said. “I could have taken the easy route and taken it easy the rest of my high school career. But I want this challenge. I don’t want to go the easy way.”

Downingtown West coach Mike Milano has seen Howard grow up right before his eyes. Howard strapped the program on his back to do amazing things this season, leading the Whippets to the PIAA 6A state semifinals.

“Downingtown West isn’t a split-semester school, so it was discussed and the administration was very, very cooperative,” Milano said. “Will had this opportunity and he was going to do what he had to do to make this work. Will is one of those guys who sees what has to get done —a nd he gets it done.

“I miss him already. I’m going to go to weight room on Monday looking around for him knowing he’s not there.”

“My mom might not let go,” Howard said, laughing. “She gets a little emotional. It’s hitting me that this is approaching. It might not really hit me until I’m on the plane flying down there. I’m sure my mom will cry, because she’s a crier. But when I see her get emotional, there’s a good chance I’ll get emotional, too. It’s something I have to do, and my family understands this and supports me. It’s a move that I have to make to reach my goals.”

In the meantime, Maureen Howard will use the ticket back home for another time.