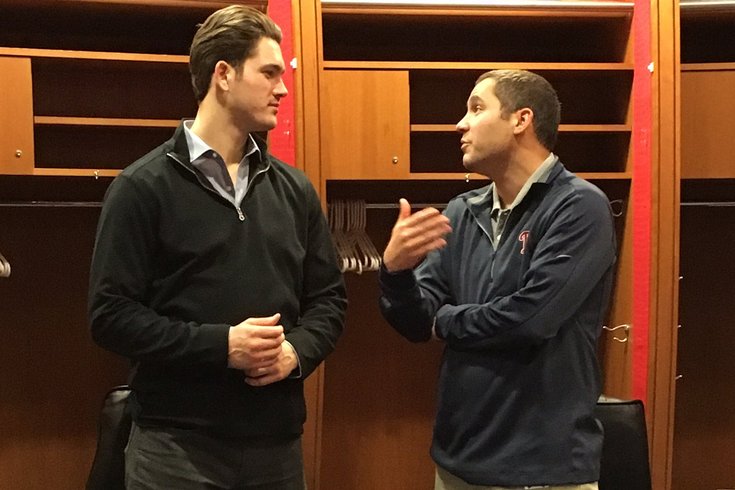 Pitchers and catchers aren’t required to report to spring training for another 33 days (on Monday, Feb. 13) but Drew Anderson had plans to arrive in Clearwater, Fla. on Jan. 25 – more than 2 1/2 weeks early.

Like many a young prospect, the length of Anderson’s stay in big league camp is uncertain but likely to end earlier than most.

The 22-year-old right-hander is one of nine Phillies minor leaguers at Citizens Bank Park this week for the organization’s annual prospect education program. Unlike any other prospect in town, Anderson has yet to graduate A-ball. It’s highly probable he’s packing his bags bound for minor league camp before the first weekend in March.

But Anderson, a Tommy John survivor yet also someone who could jump onto the fast track in the Phillies farm system, plans on enjoying the major league environs in Clearwater for as long as he can.

“I just want to have fun, see what it’s all about,” Anderson said Wednesday in the big league clubhouse at Citizens Bank Park.

Anderson could also open up some eyes within the Phillies front office, but here’s the thing: they’re all very aware of his talents. Despite the fact that he hasn’t stepped foot in Double-A yet, Anderson was added to the 40-man roster two months ago so he wouldn’t be eligible to be selected by another team in the Rule 5 Draft in December.

In his first action since sitting out the 2015 season recovering from Tommy John surgery, Anderson went 3-4 with a 2.70 ERA in 15 starts between Class A Clearwater and Low-A Lakewood. He sported a 1.10 WHIP while striking out 78 and walking 22 in 70 innings.

The way player development director Joe Jordan explained it, adding Anderson to the roster sounded like a no-brainer, despite the difficult decisions the front office had to make with so many prospects eligible for the Rule 5 Draft.

“It wasn’t me alone,” Jordan said when asked if he went to bat for Anderson in particular. “It’s one of those things, I think internally when you talk to our staff and some of the people that have a little more of an inside information of the players we have, I think it may have surprised some people that would put him on, but it really wasn’t one that we discussed a lot.

“I don’t even remember if he was a consensus, but we got to ‘yes’ pretty quickly. It’s just easier (for major league teams) to hide an arm in a major league bullpen when you plan on losing 100 games. We just feel like this guy has a chance to be a real meaningful rotation piece. We did what we did.”

Since Anderson has made just eight starts at Class A Clearwater, it would seem likely that he’ll begin 2017 there, too. But if he shows off the poise and promise that was there in 2016, an early season promotion to Double-A – often the last jumping board to getting on the big league radar – could be in order early in the season.

It’s a remarkable ascension for a former 21st-round pick who was uncertain how his arm would respond following a 13-month layoff while rehabbing from elbow surgery.

Anderson underwent Tommy John surgery in April of 2015. On May 22, 2016, he took the mound at FirstEnergy Park in Lakewood and held Delmarva to one run on two hits in five innings, striking out five of the 17 batters he faced while walking just one.

Anderson made the jump from Lakewood to Clearwater seven weeks later and helped throw a combined no-hitter in his first start with the Threshers. Anderson allowed more than two earned runs just twice in 15 starts between the two teams.

“I think everything just clicked,” he said. “I got bigger, I got stronger. I started throwing harder. And I needed to develop the changeup so I was working on that, too.”

Anderson’s fastball sits in the 93-95 MPH range and he features a plus breaking ball, too. The uptick in velocity was a benefit from Tommy John surgery – not the actual procedure to his arm but the time he spent during the rehab working on his core and bulking up his lower half.

“I think I did legs every single day,” Anderson said. “Squating a lot. (And) I’m outside all the time hiking and mountain climbing, so legs are every strong. I’m from Reno so I’m up in Tahoe (a half hour drive) all the time.”

After watching Aaron Nola, Jerad Eickhoff, Jake Thompson, Zach Eflin, and others graduate to the big leagues in the last two seasons, the Phillies will be eager to see the next wave of young pitching make their own case for a chance to call Citizens Bank Park home in 2017. Anderson was one of seven pitchers added to the 40-man roster in mid-November, along with Mark Appel, Ben Lively, Ricardo Pinto, Nick Pivetta, Alberto Tirado, and left-hander Elniery Garcia.

Anderson probably isn't likely to reach the major leagues before 2018 at the earliest, but his addition to the roster made it abundantly clear what the Phillies think of his future.

“I like a lot about him,” Jordan said. “He’s got very good weapons to begin with, a good arm and a good breaking ball. … I think what I really like about him is he was a low-round high school pick but all he’s done is compete. He’s got a lot of confidence. I think he has a lot of the intangibles good pitchers have. … He’s got a chance to be a good piece.”