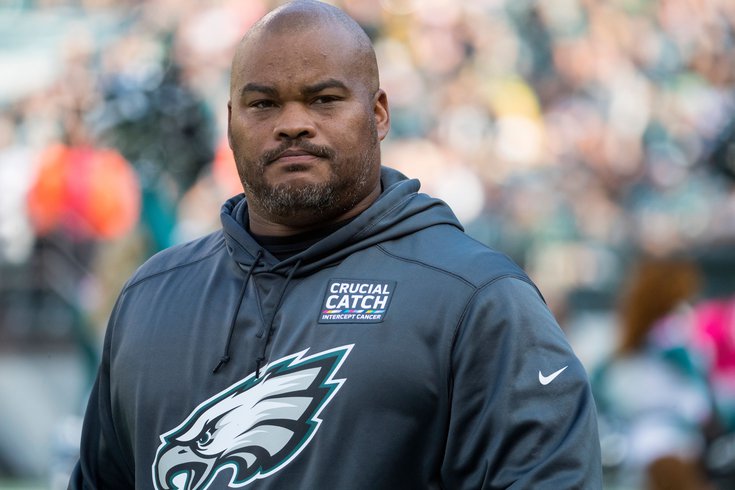 Duce Staley spent seven seasons as a running back for the Philadelphia Eagles from 1997-2003. He joined the coaching staff in 2011 and remained with the Eagles for a decade. He will now move to the Detroit Lions as assistant head coach and running backs coach.

As the Philadelphia Eagles assemble their new coaching staff under head coach Nick Sirianni, the familiar face and comforting presence of Duce Staley will no longer be with the team.

Staley, 45, was one of a long list of candidates who interviewed for the Eagles' head coaching vacancy after the team fired Doug Pederson. It was not the first time he had done so, and while current and former Eagles players endorsed him for the job, the organization ultimately went in a different direction.

For many Eagles fans, Duce bridged two decades of the organization, from a hard-nosed running back during the Andy Reid years to a reliable coach and mentor who helped lead the team to victory in Super Bowl LII.

On Thursday, Staley wrote a farewell letter to the city published by NBC Sports Philadelphia, thanking the Eagles organization and fans for their support over the years. In the letter, Staley assures fans that he will be an Eagle for life:

I am very sad to leave this great organization and city and fans, but I am looking forward to the growth opportunities that lie ahead despite the uncertainties. The way you embraced me, gave me the best nickname I’ve ever heard (Duuuuucccceeee), the way you expect the best from your athletes, the fact you deserve our best given what you’ve invested in us — all of this motivated me to reach heights I never thought possible growing up as a country boy in South Carolina that loved playing football more than I was necessarily good at it.

This has been an incredibly tough year for our fans dealing with issues like COVID and social justice. Regardless of where the rest of my career takes me, I will continue to lead from the front to help our community on these and other issues. While you know I will give my all to every team I have the pleasure to work for, you should also know I consider myself an Eagle for life. Best wishes to the best sports city of all time and never forget what we accomplished together. The grit and character of this city will allow you to accomplish even more going forward.

While Staley's departure is tough to take in for fans who saw him as a link of continuity, his opportunity in Detroit will ideally get him closer to his ultimate goal of becoming an NFL head coach.