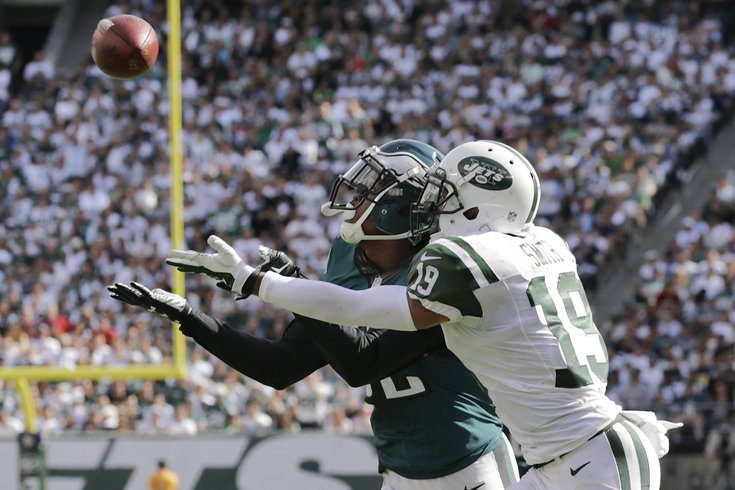 The suddenly embattled Eric Rowe will be fighting for a starting job.

If there's one positional group where the Eagles' defense definitively doesn't have any "standout" players, that would be at cornerback. Still, while there are no notable stud players on the corners, the Eagles do have quite a bit of depth, and there should be a heated competition at corner throughout the summer.

Let's look at the corners individually:

McKelvin was the first of five corners selected in the first round of the 2008 NFL Draft, 11th overall, in a class that included Pro Bowl selections Dominique Rodgers-Cromartie, Aqib Talib, and Brandon Flowers. However, he didn't quite begin to break out under he played under defensive coordinator Jim Schwartz in Buffalo in 2014, when he was 29-years old and in his seventh year in the league.

In 2014, in his only season with Schwartz, McKelvin was really good. After the first seven weeks of the 2014 season, McKelvin had four interceptions, which led the NFL. He was playing at a Pro Bowl level. Unfortunately, that season was cut short when he fractured his ankle in the Bills' 10th game and he was done for the season.

Now 30 (he'll turn 31 before the 2016 season begins), McKelvin will get his second chance to play for Schwartz on his second team with the Eagles. McKelvin was an under-the-radar free agency signing before the NFL's free agency period began, as the Eagles quickly inked him to a two-year deal worth $6.2 million four days after the Bills released him.

As we first speculated way back in May, McKelvin is likely to land one of Philly's starting cornerback jobs, and I've liked what I've seen from him as a competitor. When he gives up a completion, he's angry. When he makes a play, he lets the receiver know it. He brings energy to practice.

A season ago, Rowe had his "Welcome to the NFL" moment when he was forced into action against Calvin Johnson in a national spotlight game on Thanksgiving in front of the entire country. Johnson had a monster game that day, and Rowe was heavily criticized. (Personally, I didn't think he played that poorly). From there on out, Rowe played well, starting the last five games of the season.

Enter a new coaching staff, and Rowe found himself initially in OTAs as the nickel corner. McKelvin and Ron Brooks were the "starters" with the first team offense. When Rowe would enter the field as the nickel, he would play outside, with Brooks moving inside to the slot.

That was before Nolan Carroll began practicing. When Carroll felt healthy enough to go, Carroll assumed Rowe's spot as the first-team nickel, with Rowe being bumped to the second team.

At the conclusion of OTAs and minicamp, we named Rowe as one of five players who disappointed in spring practices. Generally speaking, the Eagles' defensive backs had a boatload of pass breakups, but Rowe didn't really get in on the action all that much.

The Dallas Cowboys have themselves another domestic abuse issue

Most Eagles observes (self included) figured Rowe to be a slam-dunk starter in 2016. That may not be the case after all. He's going to have to earn his way into the starting lineup in training camp. To note, I've been asked quite a bit if Rowe could be traded.

Rowe will count for $1,109,060 against the Eagles' cap this season. If he's traded, he'd count for $1,356,744. On the financial end alone, trading him would make no sense whatsoever. But beyond that, the Eagles aren't trading a talented corner for pennies on the dollar because he had a lackluster spring.

Carroll was a training camp star a year ago, winning a starting job and outplaying Byron Maxwell during the regular season until he broke his ankle in the aforementioned Thanksgiving game against the Lions.

Carroll was a free agent this offseason, when he seemingly drew concerns around the league about that ankle, as he signed a modest one-year, $2,360,000 contract to stay in Philly.

As noted above, Carroll initially missed time in OTAs. When he was ready to play, if practice reps are any indication, he jumped Rowe on the depth chart. Carroll is very much in the hunt for a starting job.

Brooks (5'10, 190) is bit undersized, but is known as a physical defensive back who is also a quality special teams player. Over the last two seasons, Brooks has 18 special teams tackles. Here he is destroying a poor Patriots tight end:

In his four-year career, Brooks has a grand total of zero INTs, forced fumbles, sacks, and fumble recoveries, so he's not exactly Charles Woodson.

Still, Schwartz has familiarity with Brooks, who has consistently been running with the first-team defense all spring.

We've covered Mills at length, as he was a spring camp darling, drawing praise from players, coaches and media. Malcolm Jenkins went as far as to say that Mills is competing for a starting job.

A lot of times in minicamp and OTAs, rookies look like, well, rookies. Mills looked nothing like a rookie, in terms of his demeanor. Pederson noted that Mills doesn't back down from the Eagles' veteran receivers, and why should he? This is a guy who had to cover Odell Beckham Jr and Jarvis Landry in practice every day at LSU, in addition to an absurd list of receivers he faced playing in the SEC:

Here is a list of WRs drafted into the NFL that Jalen Mills played against during his college career at LSU: pic.twitter.com/yjU40OBZvl

Having said all of the above, when you watch Mills' games at LSU, he wasn't exactly the most willing tackler on the field. Doug Pederson has said that he is going to run a physical camp. It's one thing to impress in shells and shorts. We'll see if Mills can play at the same level when they put on the pads.

Shepherd is an interesting case. A season ago, the Eagles felt comfortable enough to trade Brandon Boykin, which opened up a clear path for Shepherd to become a "starting" slot corner as a rookie sixth-round draft pick. Soon after, Shepherd tore his ACL and was done for the season.

Enter a new coaching staff, and Shepherd not only has to show that he has recovered from that injury, but he has to win over his new coaches. Shepherd did not compete in team drills during the spring, so he's a little behind some of the other corners competing for jobs.

Rice is sort of a forgotten man, but he did make the 53-man roster a season ago and remained on it for the entire season. Like Shepherd, he has an entirely new set of coaches to try to impress.

• Randall Evans was a sixth-round pick in 2015, but he spent all but the final game of the season on the practice squad.

• C.J. Smith is an undrafted free agent who had 16 pass breakups and 4 INTs in 2015 with Carson Wentz's North Dakota State Bison.