The Eagles' blitzes sucked against the Chargers, with gifs and stuff 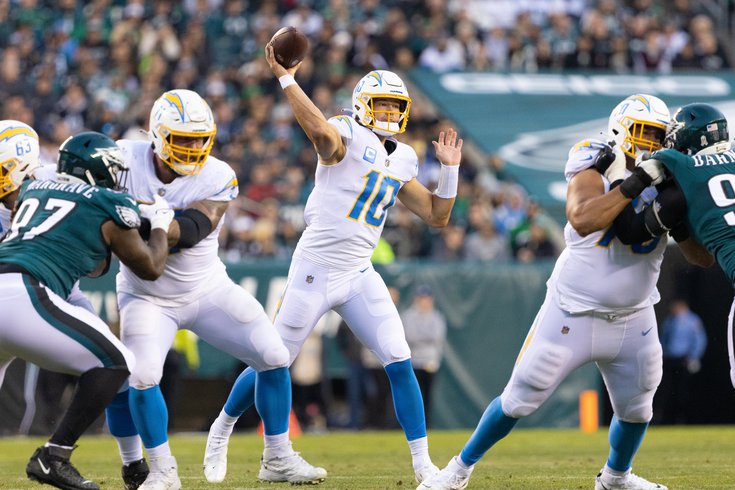 In their loss to the Los Angeles Chargers last Sunday, The Philadelphia Eagles registered zero sacks and one measly quarterback hit. That nearly complete lack of pressure came on a day in which they blitzed 12 times on 41 dropbacks (29 percent), which was their highest blitz percentage on the season, per Pro Football Focus:

Because it didn't feel like they blitzed much at all, I was curious to see what those blitzes actually looked like. I found them, and cut them up in the following video, which shows the 12 times they sent at least five rushers on Sunday, plus a couple of additional plays in which they only brought four, but they sent a linebacker and dropped a lineman into coverage. Those blitzes resulted in very little pressure.

So, what did we just look at? My notes:

• The Eagles only more than five rushers once. (They sent six once.)

• They "blitzed" Genard Avery six times. There was nothing creative about those blitzes whatsoever, as the Eagles did little to disguise them, and it seemed that the intent was to do nothing more than create one-on-one's across the board against the Chargers' offensive lineman, which oh by the way, they mostly lost. On those blitzes, there was no real intent to get a free rusher after Herbert. Those blitzes mostly looked like this:

Those blitzes did little more than than take a player out of coverage. Josh Sweat managed to get good pressure on Herbert in the red zone on one occasion, but with no other defensive linemen beating their blocks, Herbert was able to run for a TD.

• The Eagles blitzed a defensive back three times, and in fairness a couple of them should have worked, but the rest of the defense didn't hold up on their end of the bargain. In chronological order:

• They blitzed a non-Avery linebacker once. That was T.J. Edwards, with Derek Barnett dropping into coverage on a zone blitz, Herbert recognized it, said out loud "Lol," probably, and threw right at him.

• The rest were near the goal line. It was tough to decide if those were blitzes or not because they had a lot of bodies near the line of scrimmage, but I included a couple of those in case PFF counted them as blitzes.

So, yeah, the Eagles blitzed more than usual, I guess. However, there was very little creativity in trying to get rushers free runs at Herbert, and when blitzes were designed to create one-on-ones, the Eagles' defensive linemen mostly didn't win those matchups.

The blitzing schemes were vanilla, the defensive line didn't play well, and it was easy for Herbert to get the ball out quickly and hit open receivers. Also, it's hard to understand why Avery is on the field, at all.