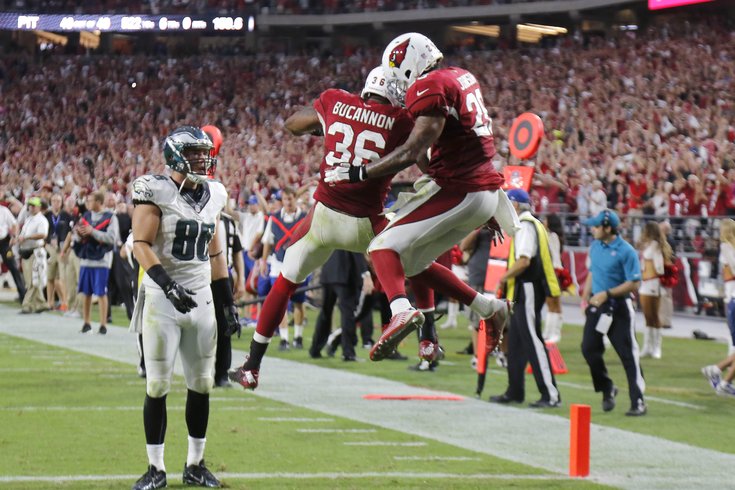 The funny thing about the Philadelphia Eagles' upcoming matchup against Carson Palmer and the Arizona Cardinals is that it actually means very little, almost nothing, in terms of their playoff chances.

If the Eagles lose, they'll actually still control their own destiny since their final two games -- against Washington and the New York Giants -- offer the chance to hand both these teams a loss and pick up two in-division victories that will decide the tiebreaker. Sure, a win this weekend would potentially allow them to seal a playoff birth against Washington in Week 16, but in the grand scheme of things, the two games that matter most are still ahead of Chip Kelly's Eagles.

Just because their playoff hopes won't take a significant hit against the Cardinals, that doesn't mean this isn't a big game for the Eagles. A strong showing, even in a loss, will not only prove that this team belongs in -- and is capable of winning in -- the postseason. A loss like the kind they suffered against Tampa or Detroit, and we're back to wondering just what this team is.

Here's what you need to know about Sunday night's matchup at the Linc.

Not surprisingly, a lot of writers are taking the Cardinals, despite the Eagles' recent wins over the Bills and Patriots. Only one of the seven writers over at Bleeding Green Nation is picking the home team to pull off the upset. Over at the Philadelphia Inquirer, both Jeff McLane and Zach Berman are taking the Cardinals on Sunday.

As for the national outlets, here's how they see the Eagles' Week 9 matchup playing out...

•    Eleven of the 12 ESPN.com analysts are going with the Cardinals.

•    There's also just one lone CBSSports.com writer picking the Eagles. Seven of the eight like the Cardinals.

•    And if you want to go by the numbers, Nate Silver and the FiveThiryEight crew gives the Eagles a 35 percent chance of beating the Cardinals -- don't forget they gave them just a 12 percent chance against the Patriots -- and think the spread should actually be closer to 4.5 points.

The Cardinals have the #1 ranked offense and #4 ranked defense in the NFL. They also have a +153 point differential, which is second-best in the NFL, and the best yardage differential in the NFL at +95.1 per game.

Simply put, the Cardinals are a better football team than the Eagles. When you're overmatched to the degree the Eagles will be this Sunday, ideally your special teams units can make a play to swing a game. Over the last two weeks, the Eagles have come up with enormous special teams plays. Can they summon one or two more? It's probably not a sustainable trend.

Again, I will hammer the point home: There is no piece of content on this entire site more worthless than my weekly Eagles prediction. Considering that my record on the season is hovering in Cleveland Browns territory, there is an excellent argument to be made that any of you gamblers out there should fade my pick until it doesn’t work.

Anyway, I like Arizona in a close one this week. Why? Well, they have both a really good offense (Cam Newton will probably win MVP, but Carson Palmer is right there) and really good defense (probably shouldn’t throw in Patrick Peterson’s direction, Sammy). My expert analysis is that those are nice things for a football team to have. And while the Cards have to travel across the country, they get the benefit of a couple extra rest days since they last played on Thursday night.

More than anything, the Eagles have some pretty bad recent history against this team: NFC Championship Game, John Skelton (ugh), Larry Fitzgerald consistently running free through the secondary, and last year’s late-game catastrophe at the goal line. It just sort of seems like they have the Birds’ number.

My dad's winning streak continued last weekend -- it's at least five games at this point, maybe longer -- as he not only accurately predicted an Eagles win, but also nailed the final point differential (3 points). His 27-24 prediction was impressively close to the final score of 23-20, and he even predicted that the deciding score would be a late field goal by Eagles kicker Caleb Sturgis, who kicked the game-winner with just over three minutes left to play.

With that being said, I opened it up to Ol' Bill again this week -- if it ain't broke, don't fix it, right? -- and he's not feeling very confident in his pick this week. He's so shaken that he asked if he could update it tomorrow should he wake up and feel different. When I first asked, he said he was too tight to call, so I was surprised when he gathered his thoughts and blurted out a final score of 31-21.

I think the pressure is getting to him. That being said, his reasoning behind picking against the Eagles is simple.

"They just scare me," he said when I asked why he was taking the Cardinals.

"Everyone. Against our secondary? Their whole team scares me."

And he even wanted a caveat with his pick. Since Washington plays earlier in the day, and the result of that game will be known when the Eagles take the field, he thinks that if they win, the Eagles will win. If they lose, the Eagles will lose. When it comes to predictions, that's as sound reasoning as you'll get. I mean, does anyone really know what's going to happen at The Linc on Sunday night?