For second year in a row, Eagles D steals show vs. Giants at home 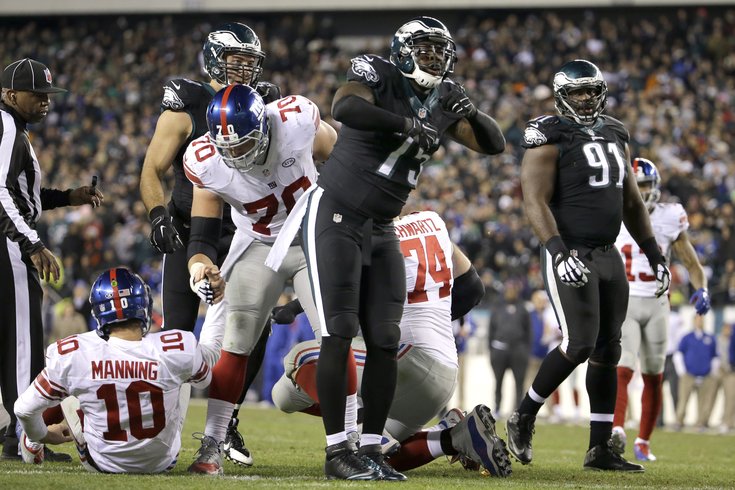 Vinny Curry celebrates after knocking down Eli Manning during the Eagles' 27-7 win.

The Philadelphia Eagles' defense may not have pitched a shutout against the New Yok Giants on Monday night at Lincoln Financial field — the Eagles beat the Giants, 27-0, in their Week 6 matchup last season — but it wasn't that far off.

After allowing Eli Manning and the New York offense to systematically march down the field on their eight-play, 80-yard opening drive, which ended with a 13-yard TD pass to Odell Beckham, the Birds didn’t allow the Giants to score again over the next 55 minutes of football.

And thanks to that stellar performance from the defense, the Eagles (3-3) are now in first place in the NFC East following their 27-7 primetime win.

“I thought [the defense] was outstanding,” head coach Chip Kelly said after the game. “Especially after that first drive, where [the Giants] just went right down the field and went 80 yards and it’s 7-0 right off the bat. It kind of neutralized the crowd, kind of hushed everybody up. And then I think they only had 160 yards after that.”

Why was the Eagles defense so effective?

A week removed from their four-turnover performance against the Saints, the Eagles had three takeaways in their 27-7 win over the Giants. And that’s especially impressive because it matched New York’s turnover total through that team’s first five games.

Furthermore, the defense got in on the scoring for the first time all season, courtesy of Nolan Carroll’s 17-yard interception return in the second quarter. And although it was early in the game, the pick six, which gave the Eagles a 14-7 lead, was technically the game-winning score. That was only possible because of the defense’s impressive performance.

The other two turnovers involved a pair of veteran defenders, DeMeco Ryans and Malcolm Jenkins.

Jenkins forced the Rashad Jennings fumble, which was recovered by Ryans. The Eagles linebacker, who forced his first fumble in an Eagles uniform in Week 5, also had the other interception. That was a good sign, especially since Ryans was the player beaten by Beckham for the Giants’ only score. Why he was covering one of the most dangerous receivers in the game, I do not know.

"I think the interception by DeMeco really stemmed the tide," Kelly said. "They were moving the ball again on that drive, and DeMeco made a nice play on the wheel route and kind of knocked the ball out, but I thought our defense played outstanding all game long."

The Eagles defense sacked Manning three times Monday night, and got pressure on him several other times, including two instances that resulted in the Giants QB taking an intentional grounding. It’s part of the reason Manning had a season-worst 62.3 passer rating and threw for just 189 yards, his lowest total since … last year’s meeting between these two teams at the Linc.

Vinny Curry was credited with a sack and a half, Fletcher Cox had one sack, and Brandon Graham had a half sack.

"I think a lot of times with what [the Giants] do, because they get the ball out quick, so they're releasing five guys into the route, there's a lot of single blocks going across the front," Kelly said. "So obviously it becomes a matchup of our D-line against their O-line. And I thought Vinny [Curry] played really well; I thought Fletch [Fletcher Cox] played really well; I thought all those guys [played really well]. It was good to see that. The one thing you have to do to disrupt the rhythm and timing, because the ball's out so quick, is get a push in the pass rush, and I thought we did that."

A focal point of the defense this season has been eliminating “X-plays,” or plays of 20-plus yards. And against the Giants, the Eagles didn’t allow a single one all game. New York’s longest play from scrimmage was a 17-yard reception by Beckham.

After an opening drive that saw the Giants basically do whatever they wanted against the Eagles D, perhaps the most surprising thing to happen Monday night was the fact that Beckham — he had four catches, including the TD, on the Giants first two possessions — was held in check for much of the game.

In fact, Beckham had just three catches the rest of the game, all of which came in the second quarter. By halftime, the second-year wideout was, statistically speaking, done for the game. He was only targeted once in the second half and finished with seven catches on eight targets for 61 yards and a touchdown.