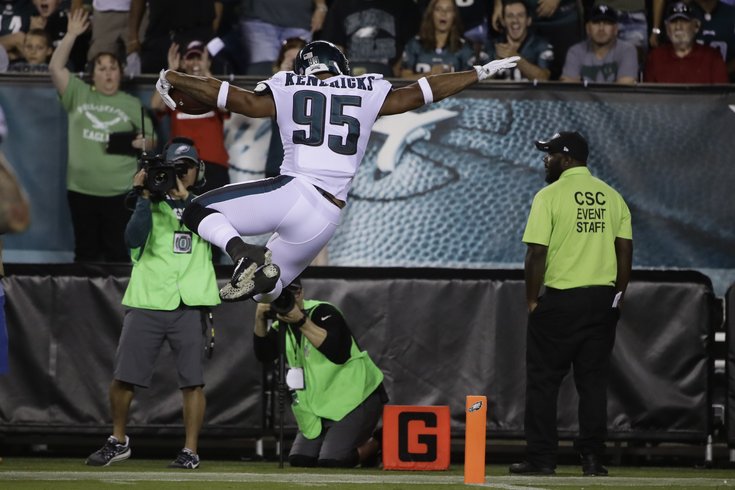 Nelson Agholor is making catches, and Mychal Kendricks tackling people. What is going on in Philly?

One of the most pleasant surprises of the Philadelphia Eagles' 2017 season has been the play of linebacker Mychal Kendricks, a player the Birds almost traded this offseason.

Thankfully for the Eagles, that trade never materialized, because they have needed him to fill in for Jordan Hicks, who is done for the season with a ruptured Achilles. In the Eagles' first game without Hicks starting in the middle of the defense, Kendricks came to play.

MORE ON THE EAGLES: Sure sounds like NFL wants the Eagles to play in London next season | Eagles DT Fletcher Cox could receive league discipline for block on Niners OT Joe Staley | Will the Eagles be 'very aggressive' at the trade deadline? | Mortensen: Eagles and Jaguars linked to Calvin Johnson | Handing out 10 awards from the Eagles-49ers game

Let's take a look at Kendricks' game against the Niners in chronological order, in gifs:

1) Kendricks gets a tackle for loss on a blitz

These gifs are sped up a bit for some reason, but Kendricks' speed is still very obvious. Here he times out a blitz nicely and gets in on a tackle for loss.

2) Kendricks closes on QB to force an incomplete pass

Here the Eagles blitz, and the Niners pick it up. It appears as though Kendricks is in man coverage, and his man is the running back. Once the back picks up Rodney McLeod on the blitz, and is no longer a threat to catch a pass, Kendricks sprints to the QB, and gets there quickly, causing the incompletion.

On a pitch to RB Matt Breida, Kendricks reacts quickly and then beats Breida to the outside. Kendricks misses the tackle, but the cavalry is there to clean up with the runner having been slowed down.

Kendricks actually missed three tackles in this game, by my count, but he gets to the play so quickly this year that those missed tackles haven't hurt yet.

4) Kendricks gets a sack while in coverage

Kendricks is in coverage on the running back, but when he sees QB C.J. Beathard begin to scramble, he takes off for him and actually turns it into a sack somehow. His speed here is ridiculous.

The object of a screen pass is to allow defenders into the backfield and throw it over their heads, thus allowing them to run themselves out of the play without using blockers on them. Here, Kendricks gets a free run at Beathard and he gets there so quickly that he kills this screen pass anyway.

Kendricks isn't fooled on this misdirection play and is there to clean up on the tight end short of the line of scrimmage.

This was one of the ugliest QB sneaks I've ever seen, and credit Beau Allen for making the play in the middle of the defense. Still, watch Kendricks fly around the end and put the final touches on this play with violence once there's nowhere for Beathard to go.

8) Kendricks strings out another play to the sideline

Once again, Kendricks misses a tackle, but is the reason for the play going nowhere. He runs through a terrible blocking attempt by the wide receiver (19) and beats the running back to the corner.

In the fourth quarter with the Eagles up big, the Niners ran an angle route to running back Matt Breida near the goal line. In years past, running that route against Kendricks was like stealing candy from a baby. Think Theo Riddick on Thanksgiving, for example. On Sunday, not so much. Kendricks did an outstanding job breaking up the pass to Breida with a diving PBU.

Kendricks wanted to be traded so that he could be a three-down linebacker somewhere. He'll get his chance the rest of the season, and he's off to a great start.