Week 1 NFL picks: Rounding up the experts' predictions for Eagles vs. Lions 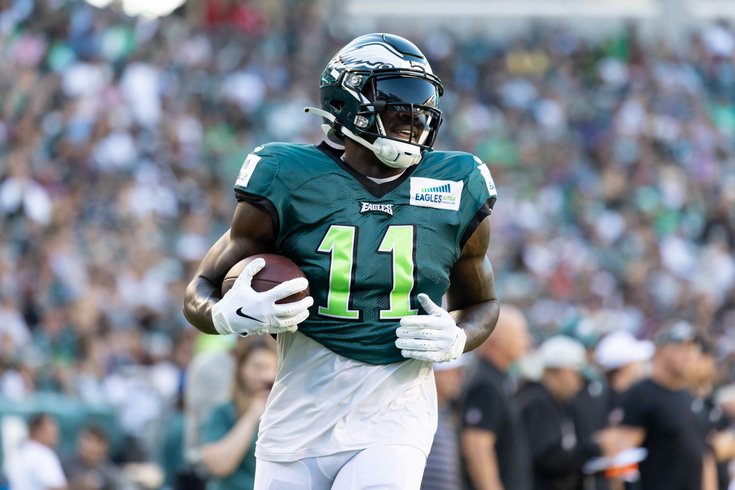 The Eagles finally kick off their season at Detroit on Sunday putting months of hype, speculation, and anticipation over a bolstered and talented roster into practice.

A.J. Brown, Haason Reddick, Jordan Davis, and the rest of the new acquisitions will all be taking their first official snaps as Eagles, while Brandon Graham will make his grand return from an Achilles tear nearly a year ago in front of his hometown crowd.

Last time these two teams met, it wasn't even close. The Eagles went to Detroit last Halloween and crushed the Lions, 44-6, through a dominant game on the ground.

Will things be different this time? Will Jalen Hurts step up as a passer thanks to his new receiving threat along with a returning DeVonta Smith and Dallas Goedert? Could Detroit, looking to improve and build under endearing head coach Dan Campbell pull off a Week 1 upset?

Maybe, but after polling our own writers, the latter doesn't seem likely. We all have the Eagles off to a 1-0 start.

But how about predictions from other local and national media?

More of the same, really. The Eagles are a very clear favorite to beat the Lions.

• PhillyVoice: First, let's loop back to us real quick. Again, all of our writers are picking the Eagles to win in Week 1. Here's a look at what Kyle Neubeck wrote:

I am probably less bullish on the Eagles over the long haul than everybody else submitting picks here. They had what looks like a very good offseason, but when we get to the point of the offseason where the GM is getting praised for trade returns on major draft busts as if he didn't create those problems himself, that’s when it becomes clear we need actual football to be played. I remain a skeptic of the primary signal caller, who will have to prove he can win games against quarterbacks with a pulse after mostly beating up on has-beens and never-weres most of last year.

But hey, enough of me being the vibe killer before the season even begins! The Eagles enter the season relatively healthy, have talent spread around the roster, and a good blend of youth and experience. With an entrenched coaching staff who proved capable of adapting on the fly last season, they're set up to hit the ground running and maximize their potential this year. An easy pick against the Lions to open the season, and we'll see where it goes from there.

• Inquirer.com: It's a clean sweep over at The Philadelphia Inquirer for their Eagles beats too. Here's what EJ Smith wrote:

Even if Detroit has a raucous crowd at Ford Field, the Eagles have a decided talent advantage and the motivation to prove they haven’t been reading their own press clippings the last few weeks.

• NJ.com: It's a near sweep for NJ.com's football writers also, save for a Lions upset from their Jets reporter Andy Vasquez. Columnist Les Bowen on why the Eagles will win and why they really shouldn't lose:

I think the Lions have some talent along both lines now, but of course, so do the Eagles.

Openers can be really weird, sometimes one team is way more into the regular-season flow than the other; I think that’s a possible hazard here for the Eagles, who definitely eased through the preseason.

But local talk radio would melt into a puddle of goo if the Eagles were to lose this, and who wants to deal with that?

• Bleeding Green Nation: Six writers, six picks of the Eagles over at BGN.

• The Athletic: The Lions gained some fans through this season of "Hard Knocks" but The Athletic's Vic Tafur, who ran through every Week 1 game for the outlet, isn't one of them. He's going Eagles.

I must be getting old. I don’t like “She-Hulk” and most of the Marvel shows on TV, and I don’t get why she is twerking with Megan Thee Stallion at a law office. And I had the opposite reaction to most fans who watched “Hard Knocks” and are excited about the Lions’ chances.

The one scene leading up to a pivotal last play of a preseason game spoke volumes, with coach Dan Campbell repeatedly yelling at players that it was for the game instead of letting them focus on the play call. Campbell is must-see TV but I am not buying him or his young staff, or Jared Goff or a defense that Goff torched all training camp.

The public has bet up the Lions’ season total to 6.5 wins (-145), and going the other way might be my new favorite bet. They open against one of the most improved teams in the league in the Eagles, and tight end Dallas Goedert especially should feast against the Lions linebackers.

• Gregg Rosenthal, NFL.com: Eagles 33, Lions 27. That Detroit secondary might not be in for a great day.

In a battle of two teams that did so much right this offseason, the Lions' secondary stands out as an unaddressed area. I can't see the unit holding up against A.J. Brown, DeVonta Smith and Dallas Goedert when so much attention will be paid to stopping the Eagles' running game.

• Pete Prisco, CBS Sports: Eagles once again. The Lions will do their best to be a pain, but a difference in talent will override that.

The Eagles look to have the makings of a deep playoff team. That's if quarterback Jalen Hurts can make strides as a passer, which is what he's supposedly done this offseason. The Lions will be a feisty tough team every week, taking on the personality of their coach. But facing this Eagles offense will be a challenge for their defense. Hurts will get his season off to a good start.

• ProFootballTalk: Eagles are the consensus pick for Mike Florio and Michael David Smith over at NBC.

Florio’s take: The Eagles have high expectations. The best way to begin living up to them is to beat an inferior team.

• USA TODAY Sports: A near unanimous pick of the Eagles. Six of seven writers going with the Birds.

• Bleacher Report: Eagles 30, Lions 24. The Eagles are the consensus pick here – to win and to cover – but two of B/R's writers think the Lions will play them tough enough to get the upset. Said Brent Sobleski:

"This pick has nothing to do with the Hard Knocks effect. Some of us don't even watch the show. However, many saw how the team played for Dan Campbell last season. The Lions were competitive every game and never gave up despite obvious roster deficiencies. Detroit will be a tough hard-nosed team.

"The squad is strong in the trenches since it features one of the league's best offensive lines and a defensive front that now includes Aidan Hutchinson. The passing game should be improved as well with the addition of DJ Chark, plus Amon-Ra St. Brown and Josh Reynolds going into their second years with the squad. This isn't to say Detroit is going to win outright. The Philadelphia Eagles should be considered the favorites to win the NFC East, but the Lions are definitely improved enough to keep this contest close."

• Sheil Kapadia, The Ringer: Sheil, now writing and picking against the spread for The Ringer, likes the Eagles to open the season too. there's just two much of a talent difference that Detroit can't make up for.

This preseason did not go according to plan for Eagles fans. Ideally, they wanted everyone to pick the Cowboys to win the division and say mean things about their team. Instead, pretty much everyone jumped on the Eagles bandwagon. Now, if the team is good, there will be no one to antagonize. And if the team is bad, it will feel like a huge letdown. This is pretty much the worst-case scenario, and the Eagles haven’t even played a game yet.

The bar is not nearly as high for Detroit, but Lions fans are feeling optimistic about a team that at least has the potential to be frisky and likable. The problem? I just don’t think this team has above-average talent on either side of the ball. If some of their young players have surprisingly significant impacts, maybe I’ll be proved wrong.

It won’t get as ugly as last year when the Eagles blew the Lions out 44-6, but I still like them to cover.

The Lions haven't won their opener since 2017, but the opportunity for Dan Campbell to get the second season off on the right foot is there. Philadelphia was 6-1 S/U as a favorite last season, and they made some solid additions on defense. Jalen Hurts and A.J. Brown combines for a strong connection early, and the Eagles escape Ford Field with a victory.

The Lions have some good vibes to have a surprising second season under Dan Campbell, to the point of getting into NFC wild-card contention. Unfortunately, they are facing another buzzy team with improved offensive upside. Jalen Hurts will use new go-to guy A.J. Brown to open up the passing game behind the Eagles' elite line as they go back to more complementary running from the backs and Hurts.

Detroit's offense can hang a little, but the defensive work in progress is seen as Philly is free to score often.

Hey, we told you the Eagles were a very clear favorite for this one.