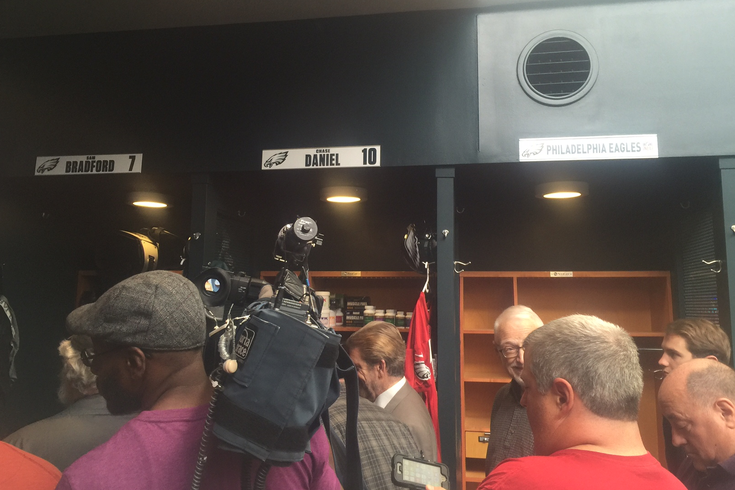 During the Andy Reid era in Philadelphia, the Eagles' locker room was set up so that each positional group sat together. The quarterbacks were over here, the defensive backs over there, and so on.

When Chip Kelly came to town, he mixed it up.

Now that Andy Reid Jr. Doug Pederson is back, the lockers are back to positional groups again. Pederson actually mentioned it Tuesday in his pre-draft presser. "I think it's important to (arrange the players) by position group in the locker room, so that they kinda hang," said Pederson. "The locker room is a unique area. It's easier for (the media) when you're in there during the season."

He's right, actually. It is helpful for the first week or two before you learn where the new guys are. Anyway, I map out the Eagles' locker room every year on the first day we have locker room access. Some people like it. Others think it's dumb. If you're among the "it's dumb" crowd, you're terrible and I hate you.

Things that stood out:

• Hey look... The Eagles left an empty stall next to Sam Bradford and Chase Daniel. Wonder what that could mean.

• Connor Barwin formerly had the Sam Bradford spot, while Jason Kelce had the JaCorey Shepherd spot. Those are easily the two best locker room stalls in the room. Barwin isn't thrilled. Shepherd must be feeling good about himself.

• The offensive linemen seem to be lined up according to projected starters at the top right. Allen Barbre would be at the "left guard" in this scenario over Stefen Wisniewski.

• My pick for most likely "camp body row" player to make the team: Malcolm Bunche.