What they're saying: Jalen Hurts is a Tier-1 fantasy quarterback 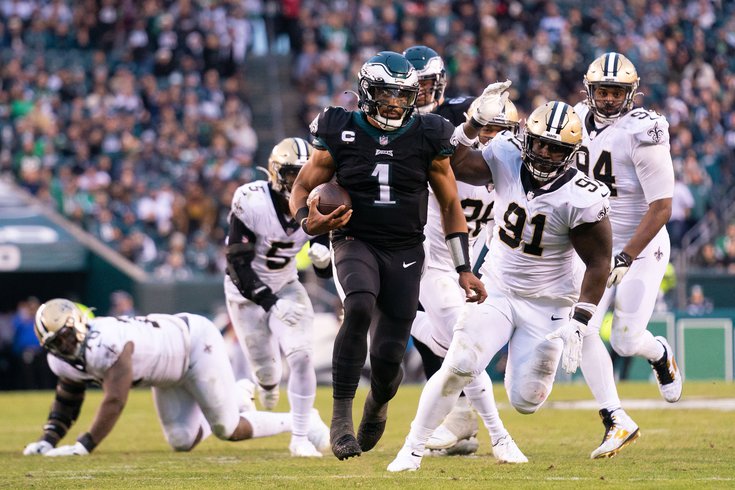 Jalen Hurts breaks a bunch of Saints players' ankles on a touchdown run.

64 days until the Eagles' Week 1 matchup with the Lions! I'm in football mode. Am I ever not in football mode? That's a different discussion entirely, but I'm jonesing to see the Birds out there, so let's round up what people out there are saying about the squad and I can chime in on these takes.

How many fantasy football leagues are you in? I'm in more dynasty leagues than sane people are in standard redraft leagues. I'm already amped for fantasy football, which means real football is closer and closer. PFF has listed Jalen Hurts as a tier "1B" fantasy QB. Here are their rankings:

I'm more bullish on Hurts from a fantasy perspective than this. If he winds up with 3,700-or-so passing yards, roughly 24 touchdown passes, 700-plus yards on the ground and 10 rushing touchdowns, he's going to outperform his ADP. It might be different if you're in leagues with fellow Philadelphians though. They always overvalue Eagles players (been there!). Perhaps Hurts' status as an overall NFL quarterback undersells his fantasy potential though, making him a steal if you're in a league with some college friends or co-workers.

After starting the 2021 season as a pass-heavy squad, the Eagles moved toward a run-heavy attack in the second half of the season. We will probably see something in between after Philadelphia made a blockbuster trade on draft day to land A.J. Brown, which now provides Hurts with three legitimate passing threats in Brown, DeVonta Smith and Dallas Goedert. That development and the strides we saw Hurts take as a second-year passer could mean the Eagles’ offense might not be as run-heavy in 2022.

It will be tough for Hurts to miss out on a top-10 finish, given his 52.3 rushing yards per game and passing-game upgrades. He offers QB1 overall upside three rounds after Josh Allen is drafted. Consider him an arbitrage play on Lamar Jackson and a primary target in Round 6 after Kyler Murray is off the board. [PFF]

Here are my fantasy QB rankings as of right now:

Over at Football Outsiders, veteran NFL writer Mike Tanier listed a "boom or bust" candidate for every NFL team, a player who could either reach a high ceiling or crash through the floor in 2022. For the Eagles, Tanier chose rookie linebacker Nakobe Dean.

Here are Tanier's best-case and worst-case scenarios for Dean this fall:

Best-Case Scenario: The only rookie on our team. The Eagles have the playmaking tough-guy linebacker fans have dreamed about since the days of Jeremiah Trotter, and they stole him in the third round of the draft.

Worst-Case Scenario: The draft-weekend injury rumors prove true, Dean cannot stay on the field, and the Eagles will be forced to rely heavily on Kyzir White, who (based on my study of Chargers film for Football Outsiders Almanac 2022) will make fans yearn for the days of Nathan Gerry. [FO]

This shouldn't come off as a slight to Dean the player. Tanier is right about the risk that Dean's injuries prevent him from being a consistent on-field contributor and that his falling in the draft made sense. Still, if the dude gets out there, he's going to be a legit impact player immediately.

Burning in the Slot 💨

Quez Watkins... an analytics darling? His efficiency from the slot was great in 2021:

His volume is lower than those guys, but if the Eagles and Hurts throw the ball more in 2022 like everyone assumes, Watkins should be a true contributor as the team's WR3.

Bring on the outrage from Eagles fans! ESPN ranked the top-10 cornerbacks in the NFL. A glaring omission? Darius Slay. Here are the rankings Jeremy Fowler put out:

Based on last season alone, Slay should be up there. He had a Pro Bowl campaign in 2021 and should've merited All-Pro consideration. Fowler did give Slay a "honorable mention" blurb though:

Slay is a nine-year vet who made his fourth Pro Bowl in 2021 and, like White, he was a fixture in the rankings the past two years. But he has 15 pass deflections since joining Philadelphia two years ago. "His ability has held up pretty well, I don't feel like he's lost a major step [at age 31]," an AFC scout said. "Love Slay. I would just take others ahead of him due to ball production." [ESPN+]

Unsurprisingly, Slay wasn't happy about it:

I'm sure he'll remember that when he lines up against top wide receivers this season...