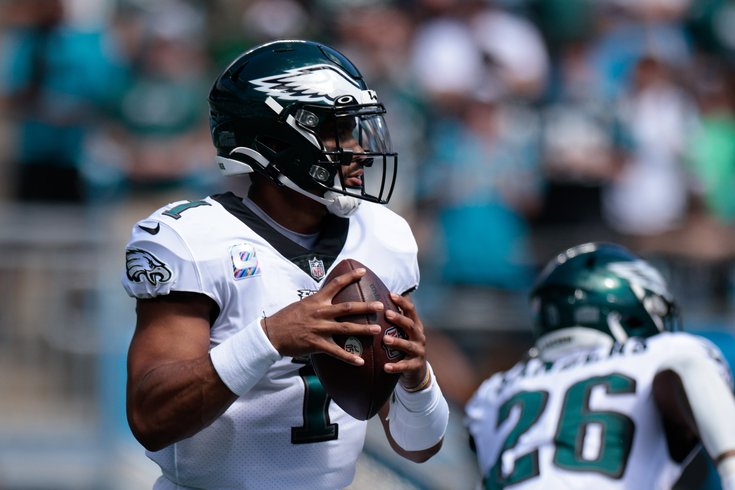 Philadelphia Eagles quarterback Jalen Hurts looks to pass the ball during the first half against the Carolina Panthers.

The Eagles' offense reached comical levels of ineptitude against the Panthers, with a safety capping off a terrible half that has them trailing 15-6 on the road. Things are not looking good for Nick Sirianni, Jalen Hurts, and the rest of the gang.

• Give the Eagles credit for this much — they put a ton of pressure on Sam Darnold early in this game, and despite Derek Barnett's involvement, they were able to do so without picking up some sort of egregious personal foul penalty. That's something like progress around these parts, and it helped Philly hold the Panthers to three points after they got off to a promising start on their first drive.

Javon Hargrave's attempt to prop up the entire group continued on Sunday, as the pressure he created in the interior freed up guys on the outside to get into the backfield and cause trouble. With the offense in dire straits midway through the second quarter, Hargrave came up with a big-time, third-down sack to kill a Carolina drive, adding to what is already on track to be his best-ever season in the NFL period. He is only a sack away from beating his career-best total for a full season, so there's no telling where he'll end up by the time is year over if he stays healthy. There has been some grumbling about the defensive scheme from prominent players, most notably Fletcher Cox, but Hargrave is taking advantage of the setup under Jonathan Gannon.

.@Jay_MostWanted kicking in the door on a weekly basis#PHIvsCAR | #FlyEaglesFly

Not a bad homecoming for Mr. Hargrave so far.

• The Eagles were an absolute mess on offense to start this game, desperately in need of a pick-me-up to try to get things going. Enter Darius Slay, who finally lived up to his "Big Play" nickname with an interception of Sam Darnold midway through the second quarter.

Big Play is what they call him@bigplay24slay | #FlyEaglesFly

Considering the number of interception opportunities that have dropped harmlessly to the turf in recent seasons, it was refreshing to see an Eagles player go up and get the ball to make a reasonably difficult catch. The only shame of this play is that Slay wasn't able to return it for a touchdown, because the ball went right back into the hands of their inept offense. Can't win them all, I suppose.

That wasn't the only standout play from an Eagles corner in the first half on Sunday. Darnold tried to go deep downfield to Robby Anderson early in the second quarter, and though he slightly missed on the throw, Avonte Maddox still did well to recover and get a hand on the deep toss, preventing a possible touchdown that would have put Carolina up by two scores early in the game.

Avonte Maddox with an OUTSTANDING play to save a touchdown!#Eagles #FlyEaglesFly pic.twitter.com/L93pfsxPNb

We haven't had many chances to spotlight the secondary so far this year, so credit where it's due after that half.

• It's honestly just kind of infuriating to watch Jalen Reagor on this team, even if you set aside his lack of production compared to other players they could have drafted. On the first play from scrimmage, the Eagles go to him and he drops the pass. On third-and-long, they use him as one of the blockers for a throw to the flat to Miles Sanders, he picks up a holding penalty. On the pivotal third-down play next drive, Reagor and Jalen Hurts did not appear to be on the same page, and while it looked initially like Hurts threw behind him, Reagor has done so little to gain trust over the last year-plus that you basically assume he screwed it up somehow. And even when he makes a catch, Reagor will often go backward after catching it, mitigating part of the gain.

Rarely do you see this guy do anything right, let alone "explosive" as it was expected coming out of TCU. A maddening player to watch who is consistently less productive than Quez Watkins, who has a case to take most or all of Reagor's snaps. If he's not going to perform with a former wideout coaching and leading the entire team, I don't have high hopes for him. He's basically the poster child for everything bad about this team.

• Philadelphia is a town that has had borderline bloodthirst for running the football, even as they've had creative offensive coaches leading the way and putting points on the board. I'm not sure the city has ever been more unified in their desire to run the ball more, and boy is it justified given the playcalling we have seen from Nick Sirianni recently. Balance is basically non-existent for this group, and even when there are obvious opportunities to ride Miles Sanders and march toward the endzone, Sirianni opts to go elsewhere.

Handed a first-and-goal following Slay's big interception, Sirianni opted to try out some slow-developing plays instead of doing the simple thing and handing the ball off to Sanders, and the Eagles suffered as a result. Use of the screen game and short throws can be an extension of your running game to some degree, but their over-reliance on screens is comical at this point, and teams are picking up on it more and more each week. They're able to break off gains here and there, but the Panthers spent most of the first half sniffing those plays out and either minimizing gains or dragging the Eagles down behind the line of scrimmage. There isn't a lot of mystery to this group, and while they're not at Chip Kelly level of predictability yet, they're trending in that direction.

Philadelphia having a developmental year is something a lot of fans (and analysts) would have been happy to accommodate on some level. Getting beaten because you're not talented enough to win yet isn't something to get worked up over. And while the Eagles have talent issues, it's hard to focus on those when you have a repetitive, relatively bland gameplan week in and week out, with little in the way of adjustments shown from a young staff that should be more flexible as a general rule early in their careers. This has just been ugly.

• I'm not sure any quarterback would look good in an offensive system that dials up screen after screen after short throw, but maybe that's sort of the problem with Jalen Hurts. The Eagles have boasted about their improvement in team speed, but rarely do we see them try to take shots down the field. They have the talent to attack with intermediate routes, but they either don't draw up those plays very often or Hurts doesn't see them. As time wears on, it's hard not to conclude they don't trust Hurts to do much more than we're seeing, which is an indictment in and of itself.

In the intermediate zones, I sort of get it. Hurts does not deliver the ball with the same sort of velocity as a lot of quality quarterbacks around the league, turning throws that should be relatively easy completions into contested catches or pass breakups. Saying "arm strength" is a problem is a bit of a misnomer because he has shown he can get a bit of air under the ball and hit guys downfield, but his arm traits do limit him and their offense in certain ways, at least through four-and-a-half weeks. From my seat, it's a lot harder to see if Hurts is just not seeing these guys downfield than it is once All-22 tape is available. But there are a lot of plays where he stares downfield and nothing develops, which is either a reason to worry about their skill position guys or a reason to worry about the quarterback they're evaluating as a building block. Both of those issues are problematic, especially when you consider the resources invested in each.

Here's the thing — even if you have no confidence in Hurts to make tough throws to all areas of the field, you gain nothing from neutering the offense by taking parts of the field completely out of your gameplan. At the very least, this season has to be about learning whether or not you believe Hurts can be the guy, and they're not even testing his capabilities with enough rigor to figure out the answer to that question. Just an embarrassing approach on several levels. You are not going to win games, develop talent, or gain important institutional knowledge playing football that has you throwing behind the line of scrimmage more than you throw downfield. Hurts averaged under two yards per completion for most of the half. Calling this a Pop Warner approach is disrespectful to Pop Warner quarterbacks and offenses.

(Hard to blame him for the insane snap from Jason Kelce that led to a safety, but not sure what Hurts was trying to do on that play, either. They were at real risk of giving up a touchdown rather than a safety because Hurts refused to fall on the ball.)

• Another Hurts-centric complaint — if you get a free play because of an offsides penalty and take a shot downfield, you have to at least put the throw in bounds. That might have been the most infuriating play of the half in a half of football filled with excruciating nonsense. And then he missed a streaking Quez Watkins for a potential touchdown immediately after that!

• The Eagles picked up a penalty on their first defensive snap and a holding penalty on their third play from scrimmage on offense. They had yet another touchdown wiped off of the board because of an obvious offensive pass interference penalty on Greg Ward, whose pick on Carolina's DBs was clear as day in real-time and on replay.

This is a dumb, undisciplined football team. They are infuriating to watch. Even when they do the right thing and get a stop in the backfield, they can't help themselves from picking up another stupid penalty, as Alex Singleton did when he hit DJ Moore who gave himself up and laid on the ground. This looks like a coaching staff with no control of their team.