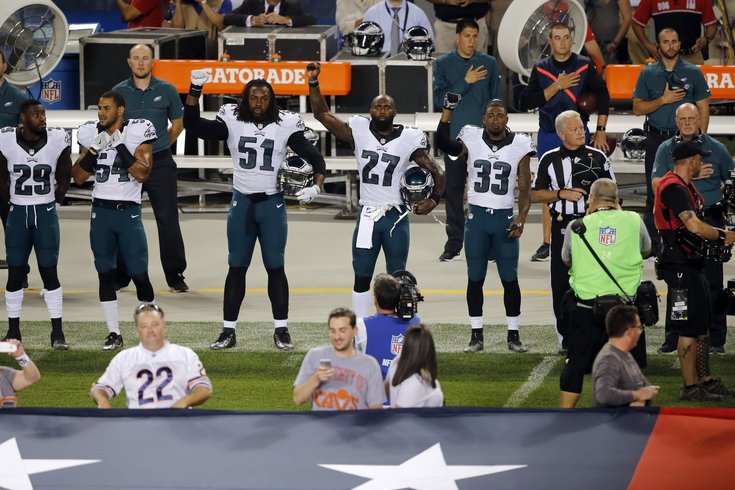 As promised by team leader and veteran safety Malcolm Jenkins late last week, several members of the Philadelphia Eagles joined in a symbolic gesture to protest social injustice during the playing of the national anthem prior to their Monday Night Football matchup against the Chicago Bears.

Jenkins -- along with Steven Means and Ron Brooks -- raised their fists in the air as the anthem played at Soldier Field.

Because of when the protest took place -- during the playing of the "Star Spangled Banner" -- it's easy to see why some feel the recent wave of anthem protests across the sports world is directed at the military or at police. Jenkins, however, wants it made clear that the stance he and his teammates took in Chicago on Monday was not meant to disrespect them in anyway.

“I’m not anti-police, or anti-military, not at all, and I want to make sure people get that point,” Jenkins told PhillyVoice on Saturday. “Like I said, I’ve had multiple conversations with Philadelphia police. I have a lot of friends who have served in the military, my grandfather served in the military. By no means would I do anything to disrespect them.

“I think that’s where the message is lost. I have great respect for the police and military, and I respect what they do. It’s why we didn’t think about this move [prior to the Eagles opener against the Cleveland Browns on 9/11]. I respect the first responders. I had to spitball call my buddy who is the Air Force and is actually deployed. We spoke on the phone about this and I asked what his feeling were before I made a decision on anything, because I respect our armed forces and what they do. At the same time — and I want to make it a point — this has nothing to do with them.”

This, according to Jenkins, is about "social injustice."

“Especially the justice system that’s in place that directly affects the under-served community, which most times affect African-Americans,” Jenkins said. “I already do a lot in the community and I feel this falls in line with what I’ve been doing since I got into the league. You know, people see and read headlines and assume something without actually reading the message that’s under the headline. The police are part of the solution. It has nothing to do with the military or the flag itself. But that’s what keeps the conversation going.”

The 28-year-old New Jersey native is a man of action, and not just the symbolic kind he helped orchestrate in Week 2. Over the summer, before 49ers quarterback Colin Kaepernick made headlines when he sat during the anthem throughout the preseason, Jenkins and some of his Eagles teammates actually sat down with Philadelphia police commissioner Richard Ross, Jr.

But the kind of systemic injustice onto which Jenkins is hoping to shine a light is wide-ranging -- one not isolated in any one city or area of the country -- and the bright lights of Monday Night Football provided the kind of stage necessary to put this conversation front and center. As Jenkins put it, "the goal is also not to beat around the bush."

"At the same time, it’s bigger than football. I don’t plan on kneeling, but it’s my own way of expressing myself with the same exact message. I support what Kap is doing. The immediate reaction when they saw [Kaepernick] take a knee, everyone was left to question his motive and message. The days and now weeks after that, people continuously heard his message and reasoning, they found it makes sense.

“Listen, I respect players' decisions," he said over the weekend. "Everybody has their right to either protest or whatever they are going to do. Malcolm and I have talked about this. It's going to happen regardless of what I decide or say, and I respect the players' decisions on it.

Pederson not only approved of Jenkins' plan but added that if the entire was to take part, he would join them in a show of solidarity.

"If they want to do something teamwide, I'd definitely be for that," Pederson said. I think it just shows unity and there's no division that way. I think it sends a great message, from our standpoint. We love this country and what it represents and the flag and the national anthem and everything. Listen, we're not perfect, obviously, and for us to stand sort of united that way, I'd be OK for that."

Ultimately, it was only a few players, so the first-year coach did not participate.