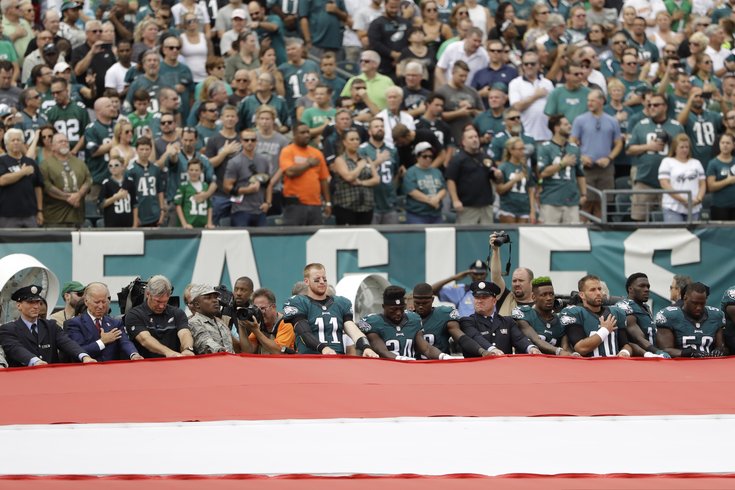 Vice President Joe Biden, second from left, and Eagles coach Doug Pederson, third from left, help to hold an American flag during the playing of the national anthem at the Eagles opener against the Browns.

As if there wasn't going to be enough attention on the Eagles this Monday night when they visit the Bears in primetime, safety Malcolm Jenkins just made sure Carson Wentz won't be the only story line surrounding the team in Week 2.

Speaking on Sportsradio 94 WIP on Friday evening, Jenkins, one of the unquestioned leaders in the locker room said that he and some of his teammates are planning something for the pregame playing of the national anthem at Soldier Field.

Eagles safety Malcolm Jenkins tells us on @SportsRadioWIP that he expects members of Eagles - including him - to make stance during Anthem.

Originally, some Eagles players planned on holding a protest during their opener against the Browns, but given that it was on 9/11 and Vice President Joe Biden was in attendance (and on the field for the anthem which was followed by a flyover) that idea was apparently scrapped.

Or, as it turns out, just put on hold.

(1) Malcolm Jenkins on @SportsRadioWIP on why he may protest during Anthem: "it's not any the flag or the Anthem itself - it's to push ....

(3) put minorities at a disadvantage."

How exactly Jenkins and his teammates plan to protest is uncertain, as Jenkins wouldn't say what specifically it could include. Players around the NFL -- and in college and even high school -- have taken to kneeling during the anthem. Others, however, have opted to raise a fist or interlock arms during the anthem.

We'll have to wait and see what the Birds are planning, as well as who is involved.

Asked if he and other Eagles might kneel or raise fist during Anthem, he said "I don't expect anyone to kneel."

One thing Jenkins did make clear, however, is that he's already spoken to coach Doug Pederson about whatever it is they're planning.

Malcolm Jenkins tells us players have spoken with coach about a potential of gesture during Anthem Monday night.

This shouldn't be a surprise coming from Jenkins, who not only supported then-teammate Myke Tavarres' plan to protest the anthem during the preseason, but also supported the message 49ers quarterback Colin Kaepernick was trying to send when he started the movement earlier in the preseason.

"If you want change and you want things to get better across the country, there's different ways to go about it. What's going to get lost is all the stuff that he was trying to point out. I think everybody is going to talk about how him making the money that he does as an NFL player and basically kind of shaming the flag or whatever, shaming the country, is unpatriotic. You talk about troops and being able to honor that, that's what's going to get talked about. It's not going to be about the lives that have been lost across the country, the injustices that are being done to minorities all across this country, that's what's not going to be in the headlines.

"It's going to be about him. It's a tough situation, but at the same time, if you've got something that you're passionate about and that's your way of expressing it, you've got all the right to do it. I'm a guy of conviction, I speak out on things I see, so I can't really look at what he's doing and tell him he's wrong."  [Tim McManus, ESPN.com]

Sure, Jenkins didn't agree 100 percent with Kaepernick's method, but that was less about the act and more about how it was going to be received by the masses.

For those that think this is just a hollow gesture by Jenkins, it's worth pointing out that this summer, he and other Eagles teammates (including Jordan Matthews and Jason Kelce) met with Philadelphia Police Commissioner Richard Ross, Jr. about civil unrest following recent violence by and against police.