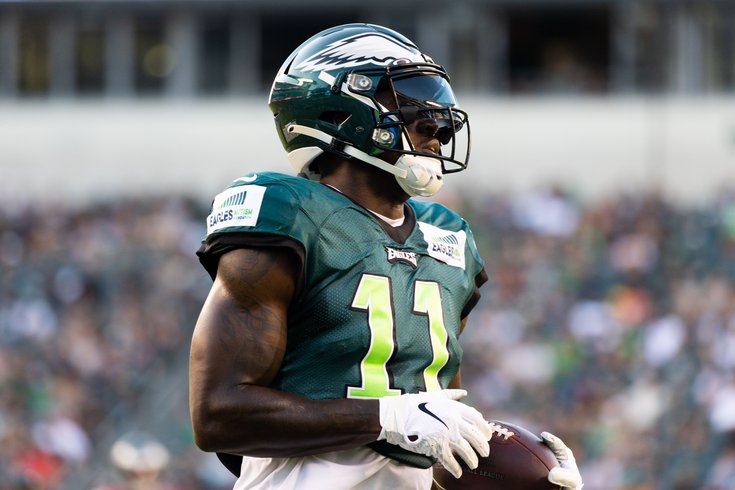 The Eagles are set to go for preseason game No. 2 in Cleveland, but before that, they had two days' worth of joint practices with the Browns out in Ohio.

It was definitely a different look for the team after running drills against only each other for the better part of the past month, and different competition brought new takeaways that you can check out in Jimmy Kempski's observations HERE and HERE.

What did the Eagles think?

Here are some of the best quotes from their media availability after both practices:

"I'm always gonna pick me. I'm gonna pick me first...I don't know about anybody else, but hopefully the whole offense, defense, we all have a great season." – WR A.J. Brown when asked to pick one guy on the team to have a big season

the exact type of energy a No. 1 receiver should have https://t.co/7S8Cu6z1Mh

"You just see the difference. Between both of those guys, [Kyzir White] and [T.J. Edwards], they're making each other better. So, it's really, really good to see them flying around on tape, and I think they push each other, which, when you got backers like that are pushing each other the way that they are and doing the things they do together, I think they got a chance to be special as a duo." – DT Fletcher Cox on LBs T.J. Edwards and Kyzir White

"We were talking about how this felt easier than last year at the Jets. I felt like we were all dying las year when we scrimmaged the Jets. I don't know if it was the weather...I just remember last year being really bad. Today, as far as the weather, wasn't too bad." – RT Lane Johnson recalling last year's open practice against the Jets

"Coming back from what he came from with his foot, how he's playing, how he transitioned from the left side to the right side is unbelievable. I feel like he doesn't get enough credit...He's a special guy to play next to. – Johnson on RG Isaac Seumalo

"He's a special guy to play next to."@LaneJohnson65 | #FlyEaglesFly pic.twitter.com/n5dN3EYJYH

"I don't think you look at it like 'Who won?' at an intrasquad practice like that. It's 'Did we get work done? Did we get better at what we wanted to get better at that day?' I thought we did. – Head coach Nick Sirianni on the approach to open practices

"I actually had found out this year that he just started playing football when he got to the NFL, so to see how far he's come – I can only imagine how he was when he first started playing, especially on the NFL level – and then just to see how good he is now...Man, as he continues to get more experience, I feel like he's going to continue to get better. We're already talking about how good he is. Will we be talking about him being one of the best?" – "Weapon" Haason Reddick on LT Jordan Mailata's development

"Myles is a hell of a player. Feel like we were one-for-one, but that's just a personal opinion. He got me on the first rep, got him on the second one. But yeah, he's a hell of a player. I asked him for that second rep and he was like 'Yeah, let's do it!' So I appreciate him trying to get me better every day, and I might go talk to him after this and see what I can do better." – Jordan Mailata on taking reps against Cleveland DE Myles Garret

"I think he's taken tremendous steps. He put a lot of work in in the offseason. I've seen it. I was there with him every day, the grind we put in, and to see it come out and pay off, to be on the same page with him is good. So we just need to build on it, continue to grow, and do what we need to do for the team." – QB Jalen Hurts on WR DeVonta Smith's improvement in route running

"I don't I just play...I don't want to make it more than what it is." – Hurts on what he considers when he breaks the pocket