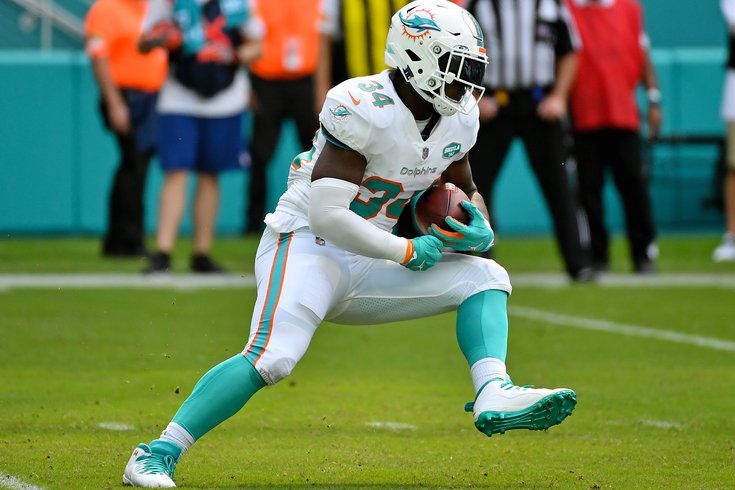 Jordan Howard had 28 carries for 33 yards for the Dolphins this season.

The Philadelphia Eagles are poised to re-sign RB Jordan Howard, who was released by the Dolphins on Monday. Howard played with the Eagles during the 2019, and he will join the Eagles' practice squad, according to Ian Rapoport of NFL Network.

The #Eagles are expected to sign FA RB Jordan Howard to the practice squad after he clears COVID-19 protocols, source said. A very familiar face.

Howard proceeded to have a horrible 2020 season, as he carried 28 times for 33 yards (1.2 YPC) and 4 TDs. It has been mentioned by some that Howard was solely a short-yardage back, hence to extremely low yards per carry. That is false, as 15 (more than half) of Howard's carries came on plays in which the Dolphins had at least four yards to go for a first down. On those carries, Howard averaged 1.9 yards per carry.

Even as a short yardage back, Howard wasn't very effective, even if he scored 4 TDs. He carried 13 times on short yardage situations (1-3 yards to go), and only managed 8 yards (0.6 YPC), and 6 first downs (which would also include his 4 TDs).

As a receiver, Howard had 1 catch for -3 yards. He fumbled on that play.

The following is a cutup of all of Howard's touches this season. It's... unimpressive.

The Dolphins were willing to part with Howard despite owing him the aforementioned $4,750,000 in guaranteed money, showing a willingness to pay him to play for some other team.

The Eagles' desire to bring Howard back continues an alarming trend of bringing back familiar players. In fact, they now have 8 players who were with the Eagles, then another team, then the Eagles again.

It's an odd signing for a team that has hit on some players unfamiliar to them, like Travis Fulgham, Boston Scott, and Cre'Von LeBlanc.

There wasn't a practice squad player out there worth taking a flier on instead of a seemingly cooked Jordan Howard, especially for a team that is clearly not going to contend for a Super Bowl this season?