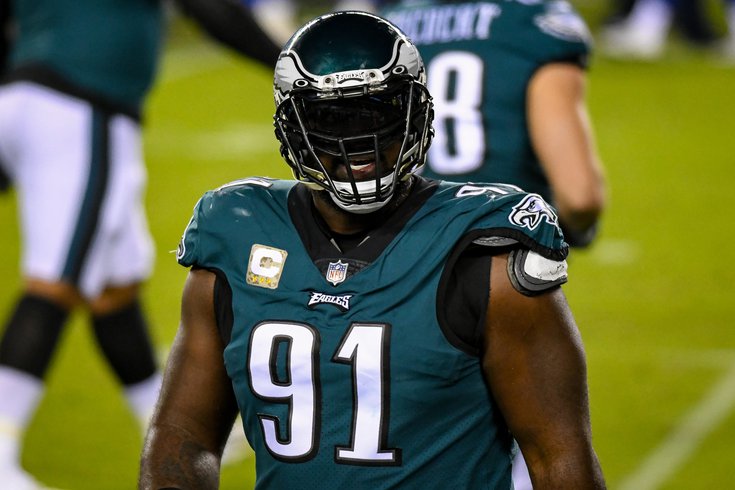 Eagles defensive tackle Fletcher Cox could find himself on a new team in 2021.

Following a disappointing loss to the Giants in Week 10, the Eagles will look to bounce back on Sunday against a Browns team that has been playing a much better brand of football this season — and has the much better record that comes along with it.

That's not to say that the Browns are some kind of juggernaut. As you'll see in our first prediction of the day, the two teams have nearly identical point differentials through their first nine games while having nearly opposite records. Part of that has to do with the divisions in which these two teams play — and the fact that despite all those losses, the Eagles have been able to keep most opponents close, losing just one game all season by more than 10 points. The Browns, meanwhile, have two in-division losses that really threw their point differential out of whack — a big 36-point loss to the Ravens in the opener and an even bigger 37-point loss to the Steelers a few weeks later.

Moreover, the Browns don't really have an impressive win on their schedule, beating the likes of Washington, the Cowboys, the Texans and the Bengals twice. Their best win was probably against the Colts. And their other loss, aside from Pittsburgh and Baltimore, came against a 6-3 Raiders team that has surprised many this season.

So, what does that make their matchup against the Eagles? Well, according to oddsmakers, it's a game the Browns should win. Despite the differences between their two records — and the fact that the game is in Cleveland — the Browns are just a 3.5 point favorite, according to TheLines.com. It feels like that spread should be more, no?

Either way, let's take a look at how our writers see Sunday's game playing out with our weekly predictions...

It has become nearly impossible for any informed football watcher to pick Carson Wentz to win this year. He's been the Eagles weakest link all season long — regardless of whether injuries, scheme or bad luck has assisted in his terribleness.

Wentz is just bad. The Browns are far from the strongest opponent the Eagles will face the rest of the season, but until the Eagles play a complete game and Wentz plays better than a bottom 10 NFL QB, there's no justification for picking them to beat a team with a 6-3 record. I also have Nick Chubb in fantasy and need a big week to make the playoffs, so...

The Eagles probably have no business winning this game. They're really bad — the types of questions Doug Pederson and Co. have been fielding in press conferences in recent weeks are the kind you face when your season is totally off the rails. And, despite their first-place standing in the NFC East, that's where the Eagles are through nine games this season. They're just a bad team.

So, why do I have them beating the Browns? Because I don't think the Browns are as good as their record suggests. I think they're just a middle-of-the-road team that, while perfectly capable of blowing this Eagles team out, is also capable of laying an egg. Head coach Kevin Stefanski will be pumped up to face his hometown team, but the Eagles are a desperate team, especially after losing to the Giants last week. If the Eagles lose this one, they're going to be in real trouble as their next three games all feel like guaranteed losses, with a game against the Cardinals to cap off that stretch that feels more and more like a loss with each passing week.

If the Eagles can find it in them to remember how to stop the run, that will go a long way in this one. And, if Pederson suddenly remembers that his team is at its best when they present a more balanced attack on offense, then they can certainly sneak out a win against Cleveland. Hey, someone had to pick them, right?

https://twitter.com/BrodyLogan/status/1329483956039905283
Look, am I supposed to pretend I have a real opinion on this game after covering the NBA draft and free agency until my brain leaks down the side of my face like Rudy Giuliani’s hair dye? The Eagles suck and I think they’re going to lose, but since they are specifically engineered to annoy as many people as possible, I’m picking them to win and begin another cycle of, ‘Are they turning the corner?’ Spoiler alert: the answer is no.

Okay, this is going to come off as rather strange under my name, considering that I’m the so-called “anti-Carson Wentz guy (haha).” But through the last three years, listening to various and many criticisms of Wentz from the very guys in the huddle with him, the one criticism I NEVER HEARD, was that Wentz WAS NOT a hard worker. The one constant I heard about him was that he had a great work ethic, to the point where he worked “too hard.”

So, needless to say, it surprised me when it came out that Wentz was supposedly “sloppy” at practice. Do I think Wentz’s fundamentals have slipped since Frank Reich and John DeFilippo have left? Yes, I do. Do I think he gets away with things that he wouldn’t under Reich and DeFilippo? Yes, I do (helps when your buddy Press Taylor is your coach). What is fair is that Wentz works hard. No one I spoke to ever questioned that (and that’s over 13 people in and around the organization).

“Are my practices perfect? No, that’s why it’s practice,” Wentz said himself this week. “As far as sloppy practice habits and those things, for one, you guys are out there every day, and then you’re asked to leave, so the media is not even out there. So, I don’t know where that’s coming from.

“But it is what it is. I know I’m not perfect. I know that’s why it’s practice and I’ve got to be better all the time. I’m always out there working and I know everyone else is. I haven’t seen that from myself or anybody. We’re out there busting our tails every day. Do mistakes happen? Absolutely. Is that something that I’ve seen, or that I’m worried about from myself or anybody else? No, I’m not.”

But here are some hard, cold facts that show Wentz’s fundamentals and how he sees the field have fallen to pieces: He’s thrown a league-leading 12 interceptions this season. He’s committed a league-high 16 turnovers. He holds on to the ball too long, which is part of the reason he’s been sacked a league-high 35 times. He has a passer rating of 73.1, which is 31st of 33 in the league.

The Browns’ six victories have come against teams with a cumulative record of 14-30-1, with two coming against the rebuilding Bengals. But the Browns did beat Indianapolis, the only team with a winning record on its victory ledger. The Eagles’ three victories have come against teams with a combined 9-20 record. They have yet to beat a team above .500 (and no, I will not count the 2-1 49ers led by the illustrious Nick Mullens on the list).

The Eagles show no signs of being even a shadow of what the 2017 team was. Some in this city still view them that way. Keep believing. You can join the line of Donald Trump supporters and their voter fraud beliefs. The Eagles have not given any indication that they’re a competitive playoff-caliber team (in the real NFL, not in the NFC East weak world). The Browns have a stout running attack, though if game-changing defensive end Myles Garrett, who did not practice on Wednesday due to an illness, is not available, this game can become more interesting.

MORE: Shander: Eagles stink, but should not bench Carson Wentz

The Eagles have turned no corner and continue to hide behind this notion that everything will eventually work out. It won’t. Not this weekend in Cleveland. The Browns are going to run the ball effectively and punish the Eagles defense. We also can’t rely on Carson Wentz to go without a turnover. The Browns are no laughingstock, no joking matter. Those titles are now reserved for teams like the Eagles.

There has certainly been a theme this week when it comes to the Eagles and the Cleveland Browns, and it's stopping the run.

Rookie Browns head coach and Philadelphia-area native Kevin Stefanski, a St. Joe's Prep and Penn alum who started his NFL career as an intern with the Eagles, looked at his personnel with two very good running backs and perhaps the NFL's top offensive line, and smartly shifted to a run-first mentality, no surprise since he came from Minnesota where everything revolves around Dalvin Cook.

More so Baker Mayfield is still far too inconsistent throwing the football and the loss of Odell Beckham Jr. to a torn ACL took the top deep threat out of the equation for Stefanski. The result is the fourth-ranked rushing offense in Cleveland vs. No. 30 when the Browns decide to pass it.

In other words, this will be as straightforward as it gets.

If Jim Schwartz's defense can stop the run the Eagles will have an opportunity to steal this game late and that means T.J. Edwards, the Eagles' best pure run-stuffer, needs a Dallas game, not a Giants game. The biggest hurdle to the former might be the Browns' Wyatt Teller, who is a real road-grader and has been perhaps the best RG in football this season. Helping is that right tackle Jack Conklin, another top 10-level player at his position, is on the reserve/COVID-19 list as a close contact, and while Conklin likely will be able to play, he essentially won't practice this week.

As for Carson Wentz against the Browns' 15th-ranked defense, it's about the enteral search for more consistency. The good news is that the struggling QB at least played a clean game in North Jersey so perhaps that's a foundation that can be built on.

The Eagles aren't good enough right now to beat a 6-3 team but Cleveland is also a bit of a mirage with that record right now. Expect a close one with Philadelphia coming up just short.