St. Joe’s Prep, Penn grad Kevin Stefanski up to task of turning the Cleveland Browns around 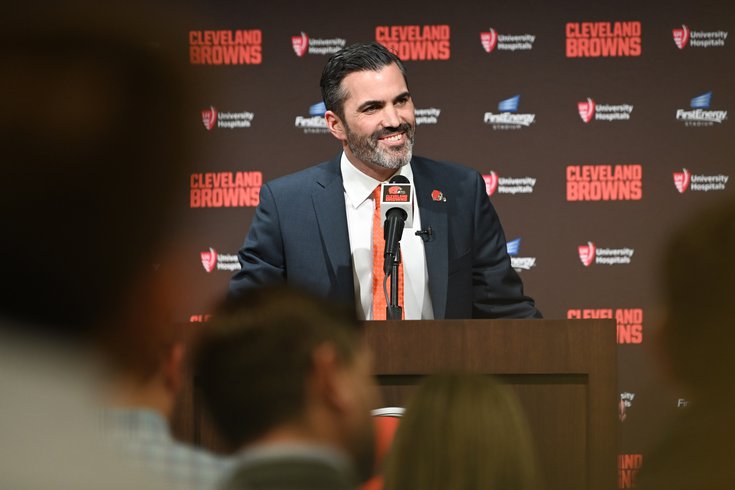 The family meeting would take place in the car ride home from church. That was only one way he could do this, Kevin Stefanski thought. He had to be direct. It had to be face-to-face. That’s the way he’s always done things.

So, he scrambled home, then off to church that January Sunday morning to explain to three of the most important people in his life what just happened for him—and what was about to occur to them.

Stefanski assumed the front seat and turned to tell his three school-aged children, two boys and a girl ranging in age from 5 to 10, that their father just got a new job as the head coach of the Cleveland Browns.

“Once the wheels started clicking and they realized that they had to move away from all of their friends, the tears followed shortly thereafter,” recalled Stefanski, laughing. “It didn’t make me feel too good at the time, but it’s an exciting time and anyone with young kids realizes moving is a big thing. The great thing about young children is how resilient they are.”

Merchandise was the key. Once covered in Browns’ gear, the Stefanski kids were happy, which made their dad happy.

Now, it’s time for Stefanski, who was raised in Drexel Hill, Delaware County, was a three-year starter at St. Joe’s Prep, and an all-Ivy League safety at Penn, to please a long-suffering fanbase in Northeast Ohio.

With the Browns' hiring of Stefanski, coupled with the New York Giants' hiring of Joe Judge (Lansdale Catholic), the two join the Bills' Sean McDermott (La Salle) to make NFL history as the first three concurrent head coaches from the same high school football league (The Philadelphia Catholic League). Locally, these are the first three head coaches from the Philadelphia area since John Rauch (Yeadon, now Penn Wood High School), who led the Raiders to Super Bowl II and last coached the Bills way back in 1970.

The Cleveland Browns are one of four NFL teams to have never been to the Super Bowl (the other three are the Detroit Lions, Houston Texans and Jacksonville Jaguars).

The last time Cleveland made the playoffs was in 2002, under Butch Davis. Since then, the team has gone through nine different head coaches, including two interim head coaches and another Philadelphia-area guy, Mike Pettine for a few years, and another with Philadelphia ties, Pat Shurmur.

The Browns have not had a winning record since 2007, when they went 10-6 under Romeo Crennel, who’s had the longest term as a Browns head coach since Davis was fired, coaching four years in Cleveland.

Since the Browns returned to Cleveland in 1999, they’ve gone through 30 starting quarterbacks, the most recent being Baker Mayfield, the No. 1 pick in the 2018 NFL Draft.

This is the challenge for Stefanski—and he’s ready for it. He’s been ready for it. He left Minnesota as the longest-tenured Vikings coach, serving with the NFC North franchise since 2006, literally moving up from the bottom, as an assistant to former head coach Brad Childress to being the team’s offensive coordinator the last two years.

The Giants wanted him as their OC after the 2017 season, but the Vikings nixed that. Two days after the Vikings lost in the NFC playoffs to conclude their 2019 season, the Browns announced Stefanski signed a five-year deal as their 18th coach in franchise history on January 13, 2020.

This is Stefanski’s first head coaching job anywhere—and it comes at the top, in the NFL, with the Browns, who finished a disappointing 6-10 last year.

If anyone can turn around the Cleveland Browns, it’s the hard-nosed 38-year-old grinder with the Philly roots.

“Listen, the bottom line is, we have a lot of work to do,” Stefanski admits. “I’m confident, because I have good people around me. That’s what makes me feel this way. It’s where my confidence comes from.

“For me, I also have great people that I can always go to if I need feedback. I can go to Brad Childress, or Leslie Frazier, or Gary Kubiak, or Mike Zimmer, or Pat Shurmur, all people a phone call away who I know and trust who can help me with any questions that I may have.”

An NFL head coach is essentially a CEO.

Stefanski was raised in the business as a quality control coach.

“It’s where I learned, from the bottom,” Stefanski said. “What you don’t want to do is totally remove yourself from what I’ll call the daily nitty-gritty of a football operation. I never want to get too far away from what those guys are doing. I’ll certainly influence as much as I can, while being as hands-on as possible, too. But I have to continue to be myself. That’s being a grinder, and continuing to have that attitude to do everything I can, as best as I can.

“This job, I need to remind everyone, I haven’t coached a game in the NFL yet. It’s why I have such a great staff. We have a lot of great people, and great teachers on this staff. Smart people around me only makes me smarter. If anything, I will continue to seek out information, and ultimately make decisions, but they’re going to be informed decisions.”

The Browns can win. And Stefanski may be a good reason why.

“I’m walking into this job with the future in mind, and we’re going to make it a very strong point that we’re not going to make any bold proclamation as to what we’re going to be,” Stefanski said. “I don’t know what coach said it, but it’s a famous line: You win with people. The good news, we have some really great people here already. We just have to add to that group.”

Out in public, whether at the airport or at a gas station, there is a Browns’ presence everywhere.

“These people are so supportive of the Browns, and that’s new to me and something I take seriously,” Stefanski said. “This fanbase is very unique. They’re extremely loyal, they’re extremely passionate and they want this team to succeed so badly.

“I’m certainly reminded of that every day.”

Within his first couple of days in Cleveland, Stefanski went to a local mall to pick something up. He wore a North Face cap tucked low over his eyes to stay private. As soon as he walked through the double doors, someone walked by and wished him luck this season.

“Every place I go, I’m so taken aback by how this fanbase loves their Browns, and it is a lot like Philly,” Stefanski said. “Cleveland is a lot like Philly as a region, because there is a grittiness to it. There are great neighborhoods, so it does remind me a lot of being back in the Philly area.”

Stefanski inherits a good group, beginning with Mayfield. In Minnesota, Stefanski did wonders for quarterback Kirk Cousins, who finished 2019 by setting a single-season career high with a 107.4 passer rating mark, which was fourth best in the NFL. 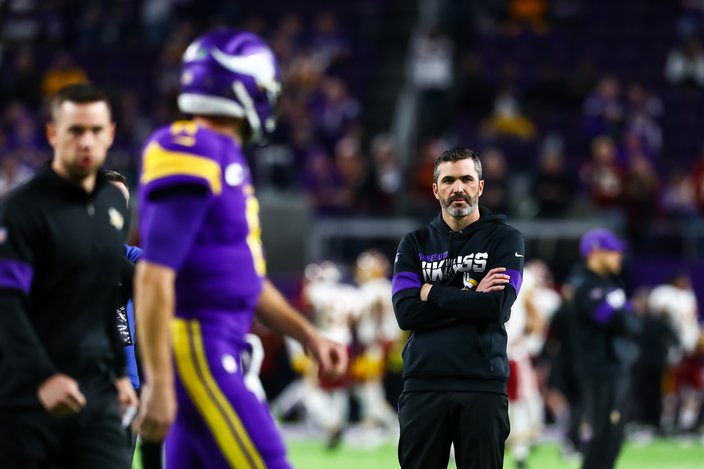 Minnesota Vikings quarterback Kirk Cousins walks past former offensive coordinator Kevin Stefanski prior to a game during the 2019 season.

Under Stefanski, Cousins also threw a career-low six interceptions, while tossing 26 touchdowns and a 69.1 completion percentage, which was also fourth in the NFL last season. Cousins set a Vikings record for completions in a season (425) and finished with the second-most passing yards (4,298) and second-highest passer rating (107.4) in Vikings history.

Cousins, running back Dalvin Cook and fullback C.J. Ham were named to the Pro Bowl—Cook and Ham for the first time.

The Browns may have a nice, young synergy going between Stefanski and Cleveland’s new general manager Andrew Berry, a 33-year-old Harvard graduate.

“Andrew is outstanding and I’m so excited to be working with him on a daily basis, we’re joined at the hip,’ Stefanski said. “Andrew is as sharp as they come.”

I’ve reached a comfort zone. There are the rhythms of the first year, and I’m well in the midst of that rhythm. We’re checking the boxes as we go.

But Stefanski couldn’t resist a playful Philly dig, “but he couldn’t get into Penn (laughs). I won’t hold that against him (laughs). Again, in all seriousness, it goes back to, 'You win with people.' You won’t find a more intelligent, better person than Andrew."

Stefanski stressed that he won’t fit a scheme around the personnel, but rather the talent around a scheme.

“That’s our job, see what players we have, see their skill set and maximize their talent,” he said. “That’s absolutely what we’re going to do. Within that, you have to put in a system that allows you to have a base core of plays, with the ability to pivot and adapt based on the players that you have and the opponent that you’re facing.”

Growing up an Eagles’ fan, Reggie White was Stefanski’s guy. He can remember as a kid asking his mother to pencil in ‘White’ and ‘92’ on the back of a white t-shirt. This season, the Browns are scheduled to host the Eagles on Sunday, Nov. 22, at 1 p.m. at FirstEnergy Stadium.

“Oh yes, I’m well aware. I’ve had many text messages reminding me of that,” said Stefanski, laughing. “The Eagles are the team I started with and Doug Pederson is a class act. I know Doug through many years in coaching.

“We played the Eagles many years when I was with the Vikings. I loved the Eagles growing up. I loved Reggie White and I loved that era of Eagles football. But it is certainly something that when you’ve been in the league long enough that it is a faceless, nameless opponent as you walk on to the field a lot of times.

“I’ve reached a comfort zone. There are the rhythms of the first year, and I’m well in the midst of that rhythm. We’re checking the boxes as we go. Coach Kubiak gave me a great piece of advice when I was leaving Minnesota. He said make a list and check them off, and remind yourself that it will get done.”

One box is certainly checked. There are three new pint-sized Cleveland Browns’ fans in the Kevin Stefanski home.