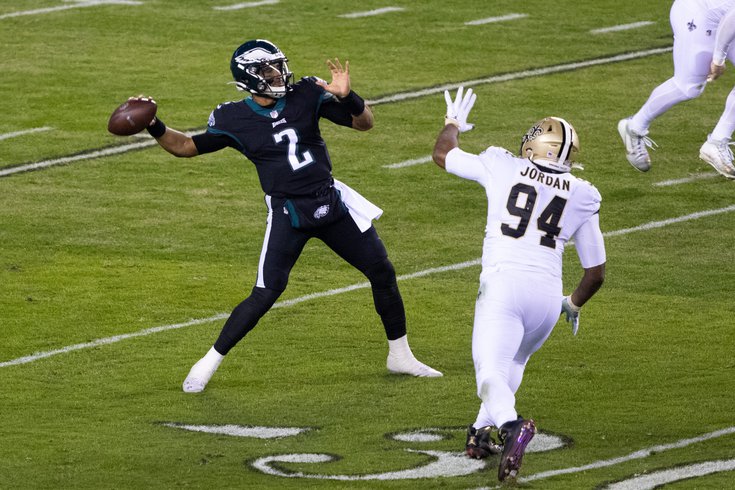 The Philadelphia Eagles' 2020 season continues to spiral toward rock bottom, as they are coming off four straight losses to the Giants, Browns, Seahawks, and Packers. Who's waiting for them next? Only the New Orleans Saints, arguably the best team in the NFC, and a team that has owned the Birds is recent years.

The Eagles will start Jalen Hurts, as you're all no doubt aware, with the team having benched Carson Wentz against the Packers last Sunday, and announcing on Tuesday that Hurts would get the nod against New Orleans.

The Saints will be without Drew Brees, who remains on injured reserve, however, they have a perfectly capable backup in Taysom Hill, who has won all three of his starts this season. Otherwise, the Saints are extraordinarily healthy for a Week 14 game. You can find the full Eagles-Saints injury report here.

We have pretty much stopped publishing our five matchups to watch each week, because, well, who cares? So here's the short-short version. With Hill at quarterback, the Saints are a run-heavy offense, with Hill being something of a sledgehammer type who pairs nicely with the elusive Alvin Kamara. The Eagles have done well to stop opposing running backs, but quarterbacks have gashed them on the ground. On the other side of the ball, the Saints have one of the best defenses in the NFL, and Hurts' first start should be a challenging one.

The Eagles are 8.5-point underdogs, according to the consensus odds at TheLines.com. That's up from 6.5 points earlier in the week. You can find my Week 14 NFL picks here. Here are our staff writer picks, who some others around the country are picking, and some over/unders.

Feel free to discuss the game in the comments below the live tracker.