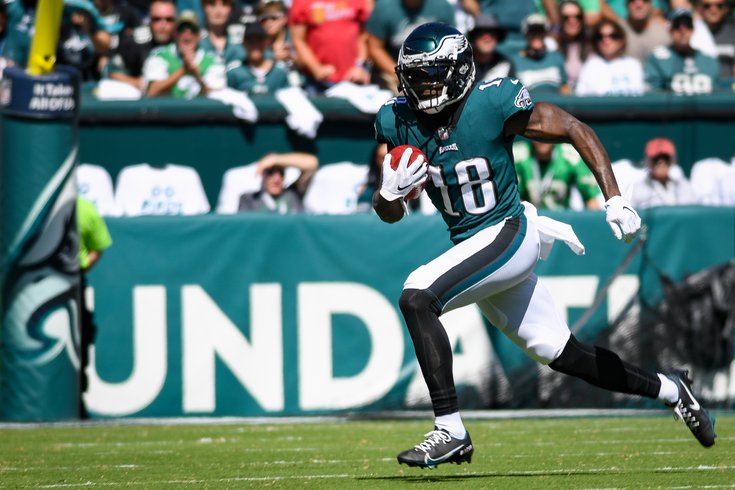 Now that the Philadelphia Eagles' 2021 season is over, we'll be taking a position-by-position look at which players will likely be back with the team in 2022, and which ones likely won't. Today we'll look at wide receiver.

Smith was one of the most decorated college receivers ever, and his skills translated to the next level as a rookie.

"I think [we] have a No. 1 guy in DeVonta Smith," Nick Sirianni said during his year-end press conference. "I think he is a No. 1 receiver, and he continues to get better. Why do I think he's a No. 1 receiver? Because he can consistently win one-on-one, he can get the ball into his hands and make plays with the ball in his hand, maybe run a short pass. He catches everything. His competitive nature. I don’t think that there are a lot of true No. 1 receivers in the NFL, and I think we have one that is going to continue to get better."

There were some concerns about Smith's wiry frame entering the NFL, but it never inhibited him as a rookie in any obvious way, either in terms of durability or getting outmuscled by defenders.

Smith broke the Eagles' single-season rookie receiving yards record in 2021. He finished with 64 catches for 916 yards (14.3 YPC) and 5 TDs, despite playing in the most run-heavy offense in the NFL, and with a quarterback who struggled at times with accuracy. In another offense, he probably would have done even more damage.

In addition to the positive attributes listed by Sirianni above, he also made his share of highlight reel catches, and was a toe-tap machine near the sidelines.

#JimmyVerdict: The Eagles have themselves a No. 1 receiver they can build around. Stay (duh).

After a rookie season during which he had 7 catches for 106 yards and 1 TD, Watkins made significant strides in Year 2. He had a fantastic training camp and earned a starting spot in the Eagles' offense. On the season, Watkins had 43 catches for 647 yards and 1 TD. He ranked third on the team both in receptions and receiving yards, with a big gap between himself and the rest of the Eagles' receivers below him.

Like Smith, Watkins suffered from playing with an accuracy-challenged quarterback, perhaps even more so because of his down-the-field ability. For example:

"He has big-time speed, and he has a knack to make plays," Sirianni said. "The style of offense that we played this year didn't allow for Quez to get as many touches as he probably deserves, but we did everything we could do to win each individual game.

#JimmyVerdict: At a minimum, Quez is a good No. 3. We'll see if the Eagles address the wide receiver position either in free agency or with yet another high pick in the draft. Stay.

After a disappointing rookie season, Reagor had an absolutely dreadful second season in the pros. Despite playing 803 snaps in the regular offense, he had a paltry 299 receiving yards and had three games in which he actually had negative yards from scrimmage.

Against the Giants Week 12, he dropped TWO potential game-winning touchdowns. On the first one, at least he had a defender draped all over him. On the second one, I mean holy crap, catch the freaking ball.

And then in the Eagles' playoff game against the Bucs, he punctuated his 2021 season with a team-deflating muffed punt.

#JimmyVerdict: I know that a common sentiment will be that Reagor absolutely cannot come back to this team under any circumstances in 2022. But we all know that he'll be back, right? Beyond the salary cap hindrances (it'll cost more to cut him than keep him) he's a first-round pick, the Eagles have zero depth at wide receiver, and the general manager has control over the 53-man roster. So, you may as well mentally prepare yourselves to see him again in 2022. Maybe not as a starter, but he'll be back. Sorry. Stay. 🤷‍♂️

Ward is a good story and a true professional, and I'm sure the coaching staff likes him, but he's a restricted free agent this offseason. The cost to retain Ward in 2022 on a "right of first refusal" basis is projected by OverTheCap.com to be $2,433,000.

#JimmyVerdict: The Eagles should not tender him at that number, however, if they can get him back into camp at something closer to the league minimum, it can't hurt to have him back in camp.

MORE: WTS: Eagles 'stuck in QB purgatory' with Hurts, but have options to improve | Three free agents who make sense for Eagles

Arcega-Whiteside is not the receiver the Eagles hoped he would be (or anything close, for that matter), but he transformed himself into sort of a blue collar, lunch pail kind of guy who deserved some positive recognition for working hard on special teams and doing some of the dirty work as a blocker on offense.

On the season, Arcega-Whiteside played 170 snaps in the regular offense, mostly as a blocker. Sirianni called him an "enforcer" in that role. But he only had five targets. In the Week 18 practice squad game against the Cowboys, he reminded us why:

#JimmyVerdict: It's fine (I guess) if the Eagles have Arcega-Whiteside back in training camp on the final year of his rookie deal, but if he, Ward, and Reagor are all on the roster during the regular season in 2022, it will have been a failure to address a positional group that still needs more weapons. Blocking is fine and good, but the Eagles may as well have just put Jack Stoll out there for Arcega-Whiteside's snaps. Go.