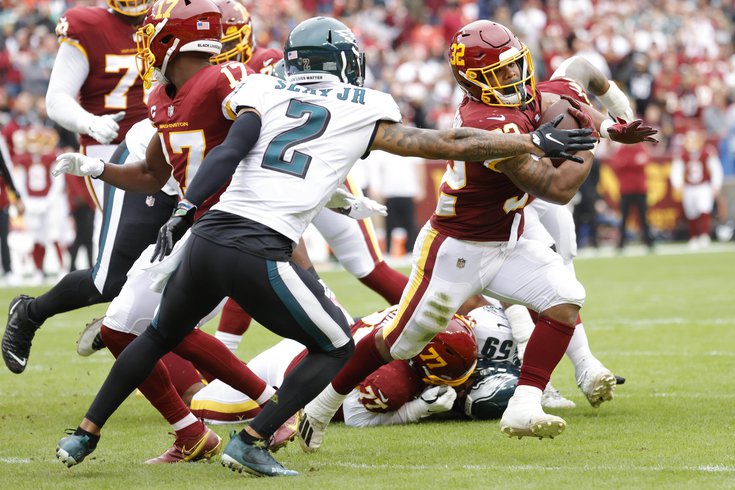 The Eagles trail Football Team 16-7 at halftime, with Taylor Heinecke doing almost anything he wants against Philadelphia's defense so far today.

• Jalen Hurts has been one of the primary culprits for Philadelphia's slow starts in recent weeks, but he was mostly good in the first half on Sunday. The Eagles moved the ball with ease for most of the first half, and if they continue to eat up yards the way they did through the first 30 minutes, you'd expect they'll come up with more than seven points in the second half.

With Washington bottling up the rushing attack, Hurts was forced to keep up the Eagles in the game through the air. There weren't any particularly difficult throws, but Hurts did a good job of navigating the pocket and playing decisively, hitting receivers with room to run after the catch over the middle and down the sidelines. Filling in for Miles Sanders, Boston Scott did some nice work as a receiver out of the backfield, and the QB did a nice job to put the ball out in front of him for YAC opportunities.

To no one's surprise, DeVonta Smith was the leading man for the Eagles for most of the first half, his route running giving Football Team fits from the very first play of the game. In fact, Smith would have had an even bigger half if Hurts had been able to find him running free in the back of the end zone, with a touchdown there to be had if Hurts had been slightly more accurate.

But immediately after Hurts missed Smith, Nick Sirianni decided to go for it in a critical spot on fourth down, and Scott was the man who found paydirt, bringing the Eagles within a field goal with a lot of football left to play:

Not a lot of complaints to be made about the offense so far, and if they can continue their trend of playing better in second halves, the Eagles will be in a good spot by the time this one is over.

• Hurts' ability to run the ball isn't really separate from what he contributes to the passing game, because a lot of his rush yards come on broken plays and scrambles rather than designed runs or RPOs. But it's worth noting that he looked great as an open-field runner in the first half, moving further past the ankle injury that briefly interrupted his season. He put his foot in the ground on their opening drive and made a vicious cut that earned him a few extra yards, and Hurts had a huge run on third-and-eight to push the Eagles to around midfield late in the half, even if the drive would eventually fall apart. The sidestep to find a sliver of daylight here is beautiful:

🔥Jalen Hurts says his ankle is fine and looks more than fine here!!!

A pretty good half from him, a mistake or two aside.

• The result of the play notwithstanding, I liked Sirianni going for it on fourth-and-short on their opening drive of the game. Pretty obvious spot to do so, and Sirianni was not spooked by the early Washington score. Can't play afraid.

The play call, on the other hand, could have been better. A power run out of shotgun is not my favorite, though given that it worked for them on their first score of the day, I suppose that's just a personal preference.

• Other than stopping the run and defending the pass, the Eagles had a good first drive on defense. (Receives message in earpiece) Ah, someone is telling me being bad at both parts of defense is actually bad. The first series was very bad for Jonathan Gannon's boys, and it stung to see them blow an opportunity to get off of the field on third-and-four ultimately conceding a touchdown as Washington carved them up.

If there's any good news from their slow start on defense, Philadelphia's defensive ends did an admirable job of putting pressure on Taylor Heinecke despite getting very little help from the interior linemen. Derek Barnett nearly sacked Heinecke for a big loss early in Washington's second possession, only for an unorthodox throw to drop in between two Eagles defenders at the end of the play. The pressure got to Heinecke yet again later in the drive, and it looked for a moment that Genard Avery was going to have his first interception as a member of the Eagles, only for an illegal contact penalty to wipe out the turnover, which allowed Washington to scrounge three points out of the drive eventually. Crippling defensive penalties have not been as prevalent for the Eagles over the last couple months, discipline issues getting worked out over time, so it was a shame to see a stop wiped out by a silly penalty.

So far, it feels like the Eagles have been overly reliant on pressure to offer any sort of defense against Washington. Heinecke found soft spots in their secondary throughout the first half, and while you'd hope pressure in the backfield will be enough to force him into a few terrible decisions after 60 minutes of football, he has (mostly) avoided disaster so far.

Washington came out of last week's embarrassing loss with something to prove, it appears, but all the motivation in the world should not have been enough to make up for missing three starters on the offensive line and their top running back. But here we are, talking about another slow start for the Eagles. And to be fair to the defense, they've typically been the better first-half unit as the Eagles have gone up a level the last couple of months, buying the offense time to find their footing and dominate second halves.

• You can point out double teams as a reason for this being the case, but the Eagles are simply not getting enough out of the middle of their line, specifically Fletcher Cox, who is getting stonewalled on play after play unless one of their ends compromises the integrity of the offensive line by getting around the corner. Josh Sweat and Barnett did a decent job of that in the first half on Sunday, and it wasn't enough to make up for the fact that the middle of the line could not get anything going.

Cox's decline has not exactly been sudden, and it hasn't been quiet either, with his gripes about the new defensive style early in the season sort of fading into the ether. But it doesn't make it any less impactful that one of their highest-paid players is a non-factor for long stretches of games.

• I was a big Jordan Howard booster during the middle stretch of this season, loving his decisiveness as a runner and the power element that he brought to Philadelphia's offense. I will not hide from the fact that I thought the offense looked better with him in the game as opposed to Miles Sanders, who looked directionless on a lot of early-season touches. But it's hard to avoid thinking Howard looking pretty slow in the first half on Sunday, a far cry from the guy we saw burst through holes earlier in the year.

It's no wonder Boston Scott was the guy getting more touches and snaps in the first half. I'd expect that to continue in the final 30 minutes, especially given the difference between the two as pass catchers out of the backfield.

• One day, an end-around play for Jalen Reagor might actually gain some yards. That day wasn't Sunday, but presumably, it will happen eventually. But until he proves capable of doing that, maybe the Eagles should stop running plays for him behind the line of scrimmage.

• Someone is going to have to explain to me why Ryan Kerrigan got so much playing time against his former team on Sunday. I get that he's got a little extra juice coming into this one, at least in theory, but he has been horrific all season, and he was one of the few Eagles pass rushers who offered basically nothing in the first half.

• Sirianni was fairly aggressive in the first half, but the numbers say it all on this one:

Washington would end up driving down the field with relative ease, so perhaps you could argue Sirianni was just trying to protect the worse unit in the first half. But he compounded this decision by calling a timeout with 35 seconds left in the half, buying Football Team a little bit of extra time that helped them put more points on the board in the first half. A brutal end fo the half.

• The people at Apple have forgotten more about advertising than I'll ever know in my life, but whoever created and greenlit the Apple Watch commercial that aired in the first half should never work in advertising again. Selling a tech accessory using a 911 call with people fighting for their lives is some absolute psycho shit. I hope to never hear that ad again, and between that and the Slack add that sends multiple notification sounds before finishing, it was an extremely triggering round of ads.

• Ron Rivera challenging a fumble that only resulted in a loss of a few yards on first down with three minutes left in the first quarter has to be one of the dumbest, lowest-leverage challenges I have ever seen. What a colossal waste of everybody's time.

• There was an ugly collision between Washington tight end Ricky Seals-Jones and a cameraman midway through the second quarter, and the dust-up was bad enough that both men remained on the ground even after a commercial break, a worrying sign after Seals-Jones went headfirst into a huge piece of equipment on third down.

Scary collision between WFT's Ricky Seals-Jones and a cameraman. Seals-Jones has been carted off the field and ruled out with a neck injury. pic.twitter.com/7cUrfDxafy

Seals-Jones would need a stretcher to get to the locker room and was immediately ruled out, while the injured cameraman would eventually return to the sidelines after getting checked out.