Eytan Shander: Howie Roseman put on a masterclass in NFL Draft's first round 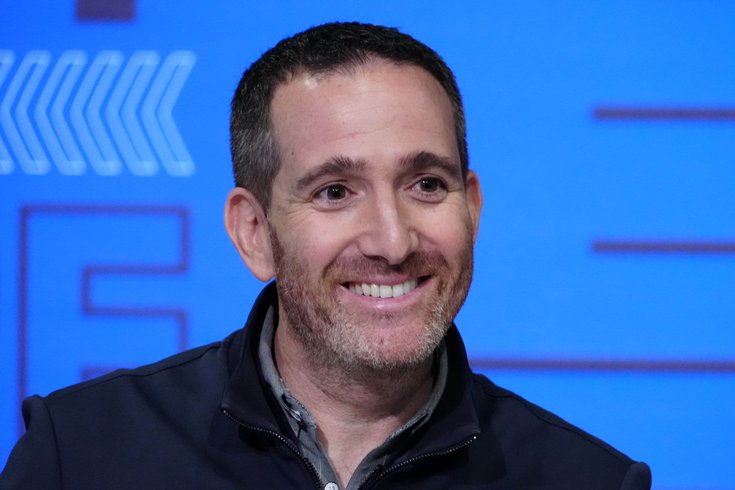 Howie made it rain. The complexity of the tenure of Howie Roseman with the Philadelphia Eagles is rivaled only by the process in which he navigates the draft board. Some hit, some miss. It’s the nature of having more ammunition in the clip as opposed to taking down a five to six-pick draft with a flint lock.

What happened in the first round of the 2022 NFL Draft was a masterclass taught by Mr. Roseman – put some respect on that man’s name. I love the patience-turned-aggression at the last minute, to only leap one team to still draft a prized player in Jordan Davis. We will have so much time to talk about Davis and the proven approach by Roseman to understand then attack the draft board – especially as it unfolds.

He's the equivalent of a live bettor taking smashing tickets as he stays ahead of every play. Again, like even the best who successfully flash bet, it’s never an exact science and nobody bats .1000. This is why you don’t reduce his tenure with the Eagles to Danny Watkins or a bunch of other misses.

A whole hell of a lot more. Trading for AJ Brown – on draft day, signing him to an immediate deal, and the on-field potential – might be Roseman’s defining moment as a team builder. This was capturing the moment with enough bullets stocked to prepare for anything.

The three biggest takeaways from the Brown trade highlight how smart Roseman can be on his best day, and why his process might ultimately trump the bad picks. It's a process that incorporates far more than just who he drafts.

You will see a lot about how Roseman flipped picks and worked the back-office deal to land Brown, but the depths of the process will rarely be discussed. That’s the biggest and most impactful takeaway from all of this; the trade for Brown validates what Roseman is doing is working.

This was just like what happened with the Sam Bradford trade, where the Eagles took advantage of circumstance in Minnesota. The idea was having enough picks to take advantage of any team that may be desperate enough to pull the trigger on… Bradford. But desperation is a funny thing, it causes teams to lower their expectations and standards. Call it beer goggles on the professional level, but Roseman can sense it coming from a mile away.

Roseman was there to put his arm around the Titans front office, knowing full well that they were not going to pay Brown for his services. It’s always about the end, never the means, that’s a variable that changes depending on the team and their situation. This time it’s the Titans and a star WR in the NFL unable to come to grips on a deal. This doesn’t happen without the ability to stock worthy draft picks to fire when necessary, even if it’s right down to the last minute.

AJ Brown is a monster; his numbers speak for themselves. You will see countless tweets and posts with him doing amazing things on the football field. I can’t wait to buy my son his jersey – my son’s first Eagles jersey. Jalen Hurts is a happy man, as is Nick Sirianni, and your cousin Johnny Sirianni.

The entire fan base is thrilled with what’s to come on the field but take a second and contemplate what just happened off the field. This is the second biggest impact made on the team and Roseman by trading for Brown – the fact that they have a bonified star next to what should be another one in DeVonta Smith. This is not easy, especially through the draft. It’s also not a slam dunk that a high-profile player will want to come here in free agency, further highlighting the dubious history of the first-round receiver.

We can point to a couple of recent first-round thuds at the WR position taken specifically by the Philadelphia Eagles, that’s easy because it’s right in front of us. It’s actually league wide, as Tim McManus tweets drafting a receiver in the first round then re-signing him is the most difficult thing to do in the NFL. No other position has seen less second contracts with their first team from 2000-2017. So yea, we can crush Howie for some bad ones, but it’s not just him.

This is why the Brown trade was monumental. It fixed so many team issues while addressing the same larger one on a league level. Instead of doing the same thing over and over and expecting different results – drafting another WR in the first round despite having a small hit percentage – Roseman did the better thing. He secured a guy who enters his second contract on a new team, but it’s Roseman’s team. It’s a move out of Bill Belichick’s book where he takes advantage of league trends with personnel, making it easier on him and his team when it comes to the pressures of nailing a draft pick.

The Eagles don’t have to worry about Jameson Williams or anyone else signing a second deal with their team because they circumvented the process and exploited a trend.

The final component that illustrates how vital this deal is to the team’s immediate future and building around the QB position. The Eagles are giving Hurts a true look with talent and protection around him, this is well-deserved and a real opportunity to shine. If it doesn’t go down that way, the Eagles have two young talents on the outside who can immediately help the quarterback the team would presumably draft next year. Either way, the team is covered.

We have a long relationship with Roseman, probably longer than most of your current relationships. This is complex, with ups and downs. He’s not going anywhere anytime soon, and the team just actualized a major shift in philosophy.

I can certainly get behind this combination of the “old” Roseman digging in his bag of tricks and the “new” Eagles mentality of team building.